Could you Hike to Space on Mars? 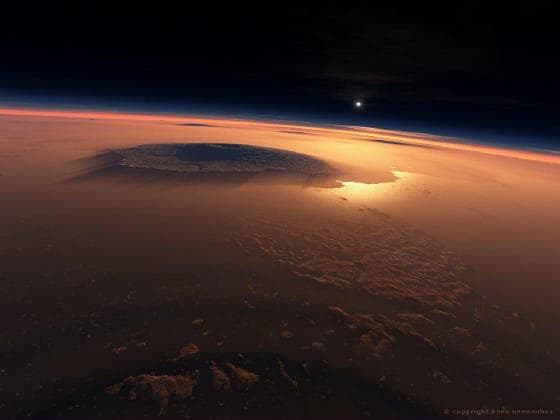 If you were to take a hike to the highest point of Olympus Mons, would you be in outer space? If, not, how close?

The Karman line is the line that separates Earth's atmosphere from outer space. This boundary (on Earth) is about 100 km (62 miles) above Earth's sea level. The definition was created by the Federation Aeronautique Internationale (FAI), whose job is to set international standards and keep records for everything in the field of aeronautics and astronautics.

The line itself isn't arbitrarily drawn either. The Karman line is the point at which the atmosphere becomes too thin for conventional aeronautics. Here, in order to maintain lift (which is important for planes), one must travel faster than orbital velocity - which basically means you need to be in 'orbit'.

A brief tangent: The Karmen line is just above the mesosphere, and it exists within the thermosphere (after the thermosphere comes the exosphere, then 'true' outer space). It's important to note that pretty much everything that orbits in low Earth orbit does so within the thermosphere. We even have a handful of satellites in the upper mesosphere.The International Space Station is as example of a space craft still inside Earth's atmosphere (it, and other satellites in the same general area, experience atmospheric drag and must adjust their orbits periodically).

Now, back to the question at hand. Let's talk about the exosphere. In principle, the exosphere extends all of the way out to the highest orbiting particle gravitationally bound to a body (in this case, we'll talk about Earth). In theory, the boundary between the exosphere and interplanetary space is the point at which pressure from solar radiation on atomic hydrogen is greater than Earth's gravitational pull. If this is calculable; it is about half the distance to the moon (or 190,000 km also known as 120,000 mi).

So, all of our satellites orbit within Earth's "atmosphere" to some degree or another. When you start getting into high-Earth orbit (classified as orbiting about 35,786 km or 22,240 mi), then the effects of atmospheric drag are negligible.

Thus, the question yet again becomes, what do we classify as 'space' for Mars? To avoid a bunch of lengthy calculations, which would be needed to figure out where the Martian Karman line is, I will just give a general estimation.

At sea level, the Martian atmosphere exerts about 0.6% of Earth's atmospheric pressure at the same level. If I set up a ratio for pressure to height, that places the Martial Karman line at about 0.6 km, or 600 m (or 0.4 mi or 2000 feet). Assuming that number is even remotely accurate, then, yes, you could 'walk to space' on Mars.

If we look at it another way, the average pressure on Mars is about 0.087 PSI and drops to 0.0044 at the summit of Olympus Mons. For comparison, the pressure at sea level on Earth is about 14.7 PSI. At the Karman Limit (on Earth), the pressure is 0.0001 PSI. My estimation to achieve the same pressure on Mars means you'd have to reach an altitude of about 65 km. Using that calculation, then you can't walk to the edge of space (a small distinction, but noteworthy). Interestingly enough, using that number is where I'd estimate the Martian Karman line to be simply by guessing it's placement in relation to Earth's - in the lower Troposphere.

As an interesting side note, using that estimation, both of the Martian moons orbit within the exosphere.