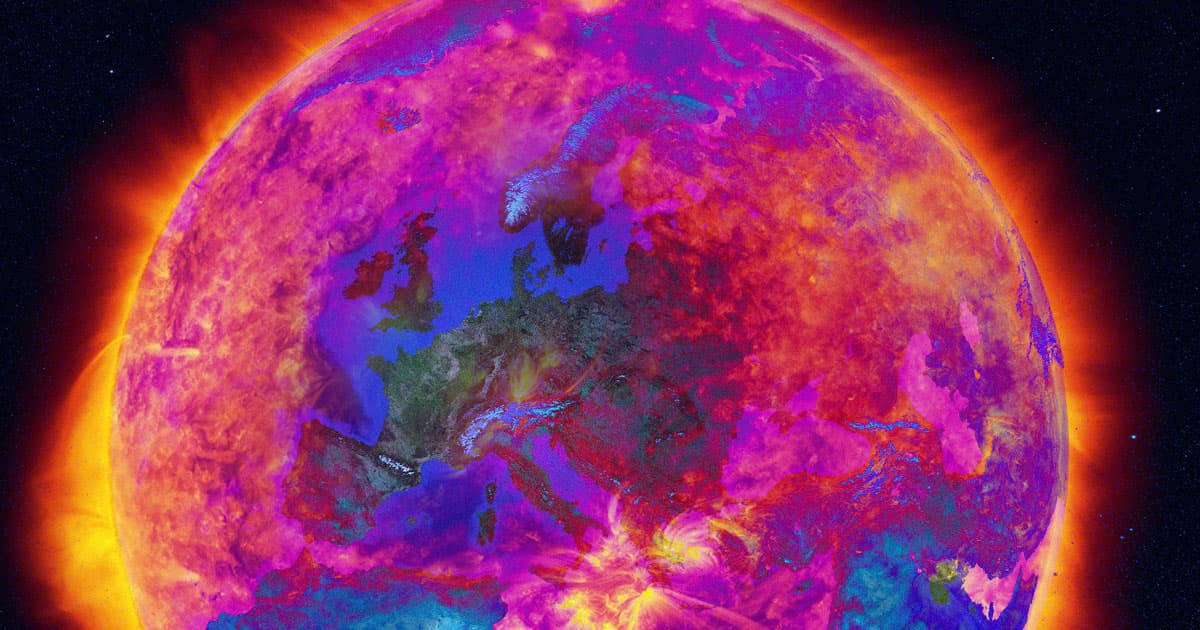 Europe is on fire, figuratively and — in the case of Spain's Catalonia region — literally.

While some are saying, the extreme weather is directly linked to climate change. To others, it's a warning shot of what's yet to come.

The French government is on high alert. For the first time ever, the national weather service activated its highest level heat danger alert. Thousands of schools are closed, as nobody wants a repeat of 2003's heat wave that killed some 15,000 people.

Germany, Poland and the Czech Republic all recorded their highest-ever June temperatures this week, as CNN reports. Germany's record of 38.6 degrees Celsius (101.5 Fahrenheit) beat a record from 1947 — 72 years ago. The country imposed a speed limit on its autobahn network — where there usually isn't one — because the heat caused the road surfaces to deteriorate.

Meanwhile, firefighters in Catalonia are trying to gain control over a massive 10,000 acre wildfire, likely caused by a heap of manure that self-ignited due to the heat.

But can the heatwave be chalked up to climate change caused by human activity or is it just an unusual weather pattern? Heatwaves are a regular natural occurrence after all.

"Due to simple warming, due to global warming, these type of heat extremes are much more likely," climate change expert at Amsterdam University told Euronews.

The number of #heatwaves in #France has doubled in the past 34 years and is expected to double again by 2050, per @meteofrance #ClimateChange pic.twitter.com/uUHT1HgnLT

A scientific study from 2018 by the World Weather Attribution group found that extreme temperatures in northern Europe were made "more likely due to anthropogenic climate change" — in fact climate change made the 2018 European heatwave up to "five times" more likely.

In the U.S. however, the response is quite a bit different. The news comes after the Trump Administration hid at least 45 research studies from the Department of Agriculture (USDA) into the impacts of climate change, according to a POLITICO investigation.

And that's despite more Americans believing in global warming than ever before according to a January report by Yale University researchers.

More on climate change: “Climate Apartheid” Is Imminent. Only the Rich Will Survive.

Read This Next
Unreliable Friends
Archipelagic Nation Sick of Other Countries Breaking Climate Change Promises
The Kids Won't Be Alright
Elon Musk Warns That Humankind Will "End Up in Adult Diapers"
Circle of Life
Hooray! The Great Pacific Garbage Patch Has Become a Thriving Ecosystem, Scientists Say
Life on Earth
Astrobiologists Suggest the Earth Itself May Be an Intelligent Entity
Wake-up Call
The American West's "Megadrought" Is The Worst It's Been in 1,200 Years
More on Earth & Energy
Fire Bird
Yesterday on the byte
Experts Say Birds Are Catching on Fire on Power Lines and Starting Wildfires
Three Cheers
Yesterday on the byte
Happy BBQ Season! There's Beer Made From Toilet Water Now
More and More
Thursday on the byte
Oh Great, Gas AND Solar Prices Are Going Up
READ MORE STORIES ABOUT / Earth & Energy
Keep up.
Subscribe to our daily newsletter to keep in touch with the subjects shaping our future.
+Social+Newsletter
TopicsAbout UsContact Us
Copyright ©, Camden Media Inc All Rights Reserved. See our User Agreement, Privacy Policy and Data Use Policy. The material on this site may not be reproduced, distributed, transmitted, cached or otherwise used, except with prior written permission of Futurism. Fonts by Typekit and Monotype.