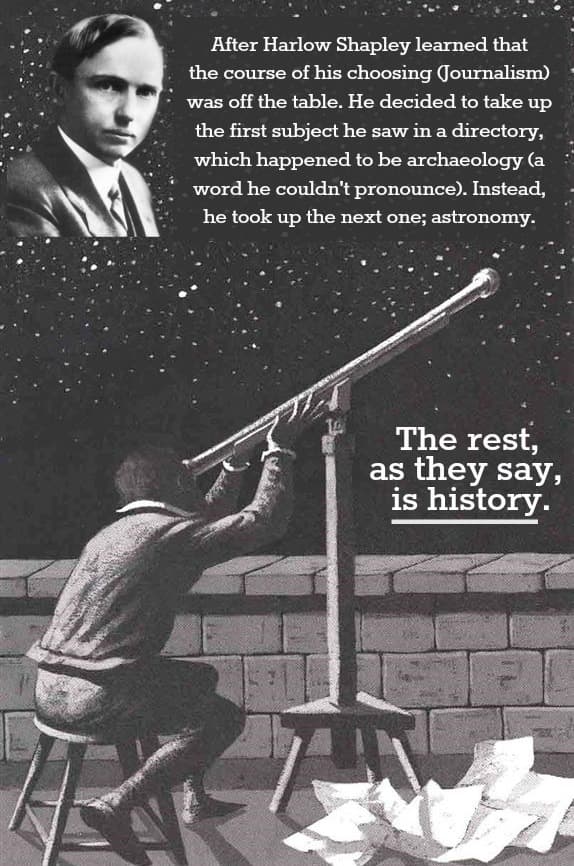 Harlow Shapley - a pioneer in astronomy - is best known for determining the exact location of the sun in respect to the Milky Way galaxy. This - along with his penchant for using RR Lyrae stars to discern celestial distances - is his legacy, but ironically, it was just the luck of the draw that be became involved in astronomy at all. You see,  Shapley, who was born in Nashville, Missouri, dropped out of school after only having completed the equivalent of a fifth grade education. After being home schooled for a certain period of time, he took up journalism, covering crimes in a local newspaper until he decided to go back to school to finish his remedial schooling (the program was supposed to take six years to complete, but not only did he complete the program in two, but he also graduated as class valedictorian)

Following the completion of his schooling, he made the decision to pursue a degree in journalism at the University of Missouri. After discovering that the school would not be opened for another year, he picked up a course directory and decided to study the first subject he saw, which was archeology. Funnily enough, he could not pronounce the word, so he looked down to the next subject; astronomy.

As they say, the rest is history. Shapley went on to become one of the most prolific astronomers of all time, receiving a vast array of awards and writing several books on the sciences. The only thing more incredible than his contributions to modern astronomy, is, by a twist of fate or coincidence, they almost didn't happen at all.

Who Was Harlow Shapley?