What Happens When You Stick Your FOOT in Lava? 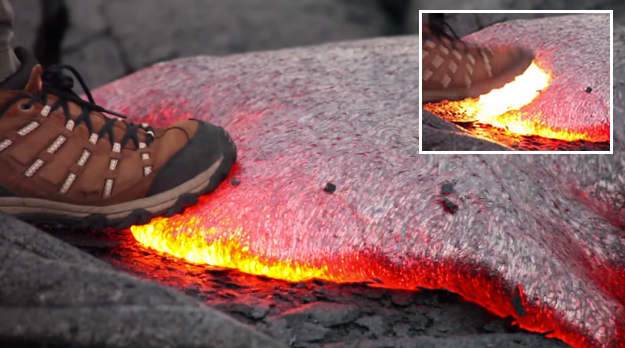 In this crazy, messed up, confusing world, there are very few certainties anymore. Yet some things remain constant. For instance, we know ice is cold and lava is hot.

Lava, simply put, is rock heated up to extreme temperatures, usually between 700 and 1,2000 degrees celsius (1,292 to 2,192 °F), definitely much hotter than most ovens (even the broil temperature, the hottest setting, caps off at about 600 degrees F). Obviously, humans can't handle such high temperatures, paired with the fact that we're dealing with molten rock, not blisteringly hot air, it's best to keep your distance.

However, let's entertain the idea that you have to scale a small river of lava to get from one side of the road to the other. There's no way to jump over it, and you have nothing to lay over top of it to safely get from point a to point b. What would happen?

This video — recorded by Alex Rivest, a neuroscientist from Boston — is an effective demonstration.

WATCH: "What You Can Learn From a Quick Step on Hot Lava"

Of course, there's a catch. Alex took the video during a visit to Hawaii (Kilauea, to be exact), which is known for being the only place in the world to harbor pahoehoe lava: described as basaltic lava with a smooth, or ropy surface. It spews from Kīlauea volcano, and can be walked across without losing a limb (even then, it's still dangerous. SO DO NOT TRY THIS ON YOUR OWN!)

"This video shows how pressure applied to this dense material only causes a slight indentation. While this may not be surprising (it is liquid rock), I think that many people think of lava as more of a hot-watery-like substance."

In his eruption blog on Wired, expert volcanologist Erik Klemetti explained how these factors come together to allow a person to walk on lava:

He also highlights the importance of not being an idiot; If you did fall in, "You wouldn't sink like Gollum in Return of the King, but you probably wouldn't like the experience much either as you explode from within when the water in your body turns to steam."