What Happens When You Put a Rare-Earth Magnet Inside a Blender? 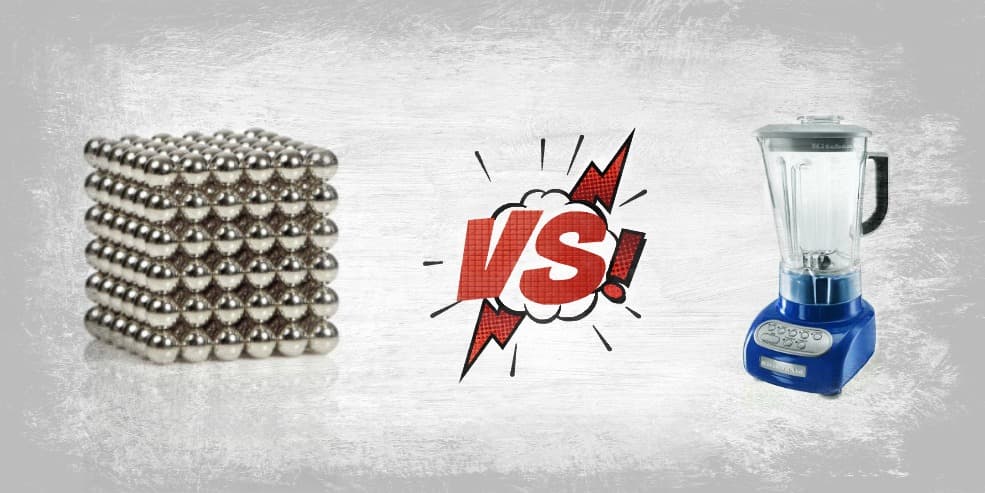 Over the course of its nearly-ten-year history, the 'Will it Blend?' viral marketing campaign has attempted to destroy things ranging from iphones, to bic lighters (some with more disastrous results than others)

In a new video, the Blendtec team sees what happens when you stick a buckyball — a rare-Earth magnet composed of an element called neodymium — in a blender. Unlike traditional elements, a neodymium atom has seven unpaired electrons orbiting its nucleus, when they are paired with iron and boron alloys, they create magnets that are much more powerful than those used on household refrigerators.

WATCH: "Will it Blend? - Neodymium Magnets aka Buckyballs"

Professor Malcolm Levitt, head of Magnetic Resonance for Chemistry at the University of Southampton, explains exactly what you are seeing here: "The sparks are caused by frictional heating, just as for a screeching brake," he continues, "The hard blender blades strike sparks as they cut into the metal balls." 'As the blending goes on further smaller fragments are produced and the temperature goes up creating more sparks."

"The metal fragments are strongly magnetic, so they stick to each other, forming a solid mass at the end."

However, he cautions people from trying this at home (or anywhere else, for that matter), saying "The most remarkable thing about the video is the cavalier attitude with respect to the toxic rare-earth metal smoke," he continues, "Even if they have good reason there is no way anyone should do this without using safe ventilation equipment and a way to confine and collect the smoke."

SEE ALSO: Watch a Magnet Disappear Inside a Ball of Putty