Blowfish is a hangover remedy that uses an FDA recognized formula. 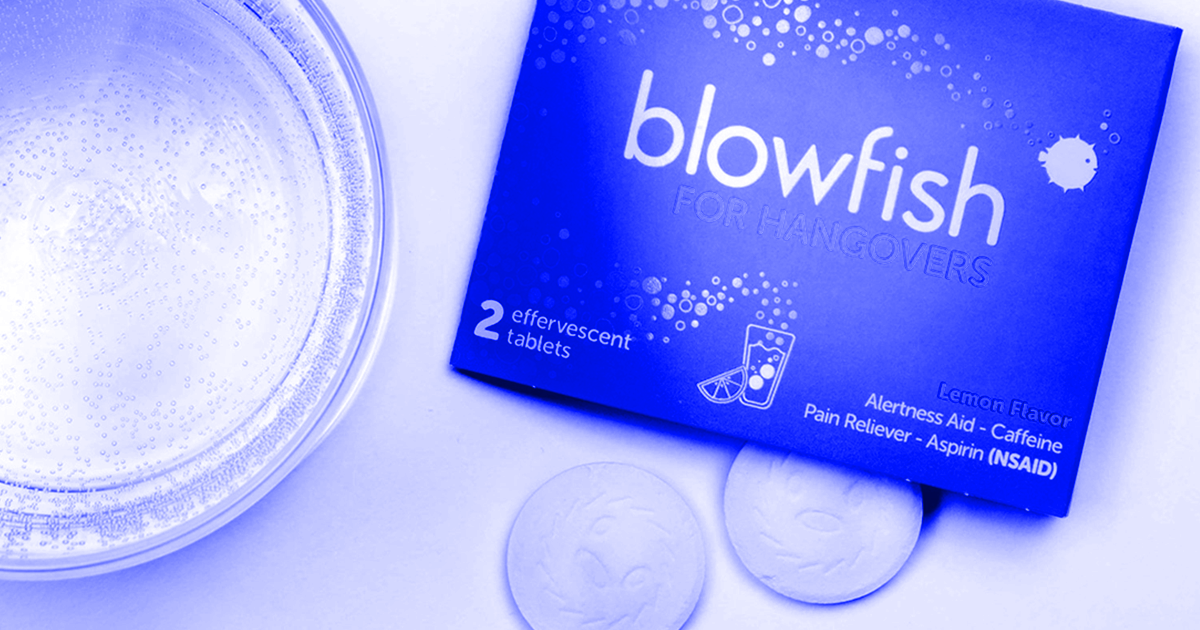 Going out for drinks would be a little more enticing if you'd simply wake up the next day without that splitting headache. But now, instead of allowing your hangover to dictate how much, (or how little) you drink, put the science behind hangovers to work for you instead of against you. According to the Alcohol Hangover Research Group, what makes a hangover so horrendous isn't the drinking. The real culprit is the chemicals your body makes to break down the booze you've already consumed. Although dehydration definitely contributes to the fact that your body feels debilitated after a night out, there's more to it than staying hydrated. It's a delicate balance of factors that include the fact that hangovers really do get worse as we age. But luckily, there's something that can help. Enter Blowfish.

Blowfish has one job: fix your hangover. In the morning, just drop the tablets in water and drink when the fizzing stops.  It’s lemon-flavored with a nice “Wow. I’m not dying anymore” finish. Each Blowfish tablet contains 500mg of aspirin and 60 mg of pharmaceutical caffeine in two effervescent tablets. You’re probably thinking this sounds too simple. And it is. Blowfish gives you everything you need to feel better quickly: pain reliever, caffeine, effervescence, and hydration. Just drop the tablets in water, wait for them to dissolve, and drink. Blowfish gives you an opportunity to make friends with the morning again. Don't believe it? The next time you've had a night on the town, take Blowfish as soon as you wake up and see for yourself... unless you really want that hangover to last longer.

The Science Behind The Blowfish Hangover Remedy

Blowfish is specifically formulated for people with hangovers. That means it’s designed to work fast and be gentle on your stomach. That's because effervescent tablets work twice as quickly as regular pills. And the medicinal caffeine and effervescent solution are easier on your stomach than coffee, which has been shown to be a strong producer of stomach acid (which is not exactly what your stomach needs after a night of getting pummeled by alcohol). Most importantly, Blowfish is the only hangover formulation that’s recognized as effective by the FDA. It’s backed by science and guaranteed to work. And at about a buck a hangover, it's pretty much a no brainer for anyone who likes to drink but doesn't like to feel like death the next day.

Blowfish's effervescent bubbles target the worst parts of hangovers: the pounding headache, nausea and dehydration. For starters, say goodbye to your splitting headache, because the maximum strength aspirin in Blowfish is designed to put and end to your pain. Plus, the effervescent delivery method gets the pain reliever into your system faster than you can email in sick. Additionally, science has proven that caffeine eases hangover symptoms like nausea. However, unlike your Cup of Joe, Blowfish won't upset your stomach. In fact, it's designed to ease that pain too. Most importantly, alcohol suppresses a hormone called Vasopressin which can result in frequent urination and dehydration. Blowfish is designed to replenish that hormone so you get the H2O and hydration you desperately need to make it through your day like last night never even happened.

Not only that, but Blowfish is a treatment that really works. The people behind it believe in their product so much they're willing to refund your money if you aren't impressed. That's right, if you don’t love the product, they’ll give you your money back. But once Blowfish does it's magic to your hangover, you'll be ordering more. So the next time you plan on hitting the town, grab some Blowfish for the morning. You'll be glad you did.

Read This Next
Brands We Love
These Euphoric Beverages Are Non Alcoholic Drinks Designed for Social Drinkers
Brands We Love
If You Want a Hangover Cure, Trust Science, Not Superstition
Futurism
A "Hangover Free" Alcohol Alternative is Under Development
Futurism
Scientists Find Comet Releases as Much Alcohol as 500 Bottles of Wine
More on Hard Science
Life on Mars
Tuesday on the byte
Physicist Says There's a Small Chance You'll Wake Up on Mars Tomorrow Due to Quantum Physics
Whack-an-Alien
Jun 14 on futurism
Chinese Scientists Say They May Have Detected Signal From Extraterrestrial Intelligence, But Probably Not
Fast!
Jun 10 on the byte
Astronomers Discover Another Mysterious, Repeating Radio Transmission From Space
READ MORE STORIES ABOUT / Hard Science
Keep up.
Subscribe to our daily newsletter to keep in touch with the subjects shaping our future.
+Social+Newsletter
TopicsAbout UsContact Us
Copyright ©, Camden Media Inc All Rights Reserved. See our User Agreement, Privacy Policy and Data Use Policy. The material on this site may not be reproduced, distributed, transmitted, cached or otherwise used, except with prior written permission of Futurism. Fonts by Typekit and Monotype.