If You Want a Hangover Cure, Trust Science, Not Superstition

Blowfish uses an effective FDA-recognized formula to provide the relief you need. 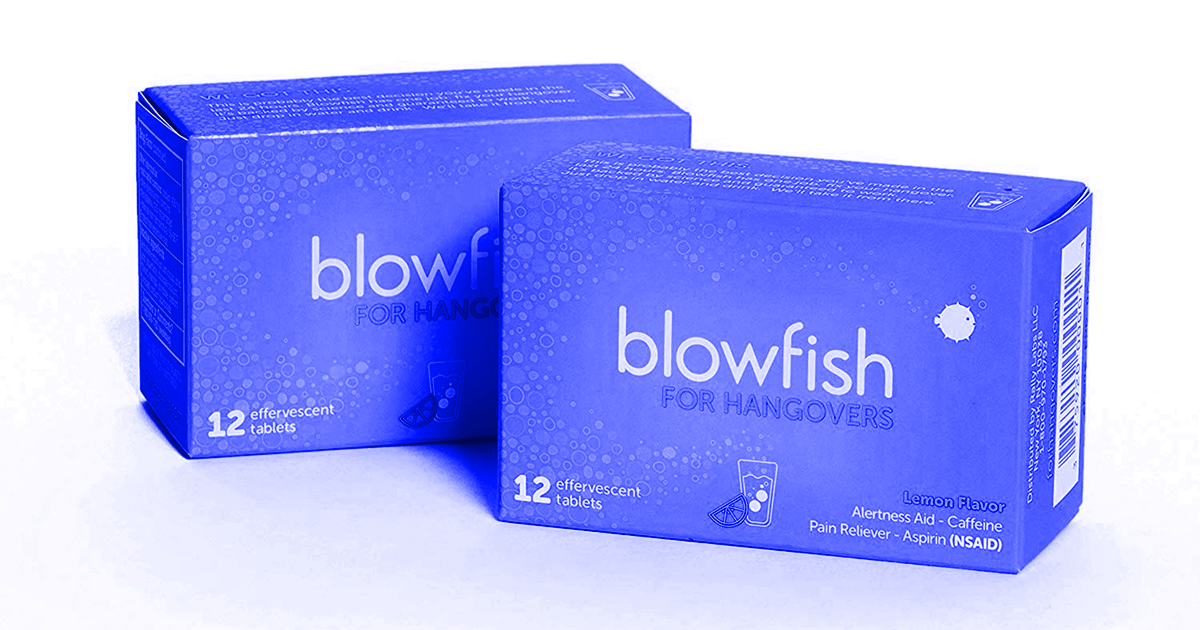 Hangovers suck. This is not a controversial statement. You’re probably well aware of this fact, as well as the corollary that hangovers get worse as you get older. Unfortunately, when it comes to a hangover cure, hardly anyone actually knows what they are talking about. If you ask four different friends what they do to cure a hangover, you’re probably going to get four wildly different answers. One of them might say the best cure is a big greasy breakfast. Another will tell you to skip the food and wash down a couple of Advil with a pot of strong coffee. One will rave about “natural” herbs like milk thistle and chicory root. And another will tell you about some bizarre concoction that he heard about from some guy at work, who got it from his granddad, who got it from an old Navy buddy while serving in the south pacific during WW2. But luckily, thanks to Blowfish for Hangovers, we don’t have to rely on scientifically questionable advice from friends to cure hangovers anymore.

Unlike a lot of other hangover cure products you might find at your local drugstore, Blowfish isn’t a gimmick. It is based on real science. In fact, it is the only hangover remedy with a formula that's officially recognized as effective by the Food and Drug Administration.

Each dose of Blowfish contains a maximum strength 1000mg dose of acetylsalicylic acid, better known as Aspirin, as well as 120mg of pharmaceutical caffeine, which is about the same amount in a small cup of coffee. That’s it. If that sounds simple, that’s because it is. But the secret to Blowfish’s efficacy is not the ingredients. It’s the delivery method.

The active ingredients in Blowfish are delivered via two effervescent tablets which dissolve completely in water. Scientific studies show that effervescence dramatically enhances the rate at which medicinal substances are absorbed into the bloodstream. Thus, whereas a regular Aspirin tablet can take up to 40 minutes to take effect, Blowfish starts working in just 15 minutes.

Here’s a more thorough look at the science behind Blowfish, broken down by symptom.

Ever wonder why we get splitting headaches after a long night of drinking? Well, it turns out that, as the body metabolizes alcohol, it creates chemical byproducts that trigger inflammatory reactions. And these reactions cause excruciating headaches that are sometimes accompanied by acute light and sound sensitivity.

Unfortunately, no matter what your favorite naturopathic blogger might tell you, there’s no vitamin, herb, or mineral you can take to “get rid of” these chemical byproducts, because chemistry is not magic. However, Aspirin is very effective at alleviating the inflammation that these chemical byproducts cause. And with Blowfish, the effervescent delivery method makes sure the Aspirin gets into systemic circulation as fast as possible.

Unfortunately, the neurological effects of alcohol don’t stop when you sober up. They can actually last well into the next day. And when combined with all the sleep you didn’t get when you were out partying, this can leave you feeling exhausted, irritable, and unable to focus.

The good news is that caffeine is very effective at stimulating the central nervous system and giving the mental boost you need to get through the day. Unfortunately, the most popular source of caffeine—coffee—tends to aggravate another very common hangover symptom.

Last but not least, there’s dehydration. The reason we get dehydrated when we drink is that alcohol suppresses a hormone called Vasopressin, which results in frequent urination. Because it’s a refreshing lemony beverage, Blowfish helps give your body the water and hydration it desperately needs after a night of boozing.

The Hangover Cure With An FDA-Recognized Formula

Blowfish is currently sold in a number of quantities, but right now the best deal is the Value Pack. It gives you 40 tablets (20 doses in 20 foil-wrapped pouches) for just $25. That works out to just $1.25 per hangover. All orders come with free shipping in the United States and a full money-back guarantee.

So if you’re looking for a hangover remedy that really works, give Blowfish for Hangovers a try. You literally have nothing to lose except a splitting headache and regret.

Read This Next
Brands We Love
These Euphoric Beverages Are Non Alcoholic Drinks Designed for Social Drinkers
Brands We Love
Make the Science Behind Hangovers Work for You With Blowfish Hangover Remedy
Futurism
A "Hangover Free" Alcohol Alternative is Under Development
Futurism
Scientists Find Comet Releases as Much Alcohol as 500 Bottles of Wine
More on Hard Science
Good God
Tuesday on the byte
Huge Cloud of Toxic Yellow Gas Kills 13
zombie star
Tuesday on futurism
Scientists Puzzled by Star That Exploded in Supernova But Somehow Survived
Life on Mars
Jun 21 on the byte
Physicist Says There's a Small Chance You'll Wake Up on Mars Tomorrow Due to Quantum Physics
READ MORE STORIES ABOUT / Hard Science
Keep up.
Subscribe to our daily newsletter to keep in touch with the subjects shaping our future.
+Social+Newsletter
TopicsAbout UsContact Us
Copyright ©, Camden Media Inc All Rights Reserved. See our User Agreement, Privacy Policy and Data Use Policy. The material on this site may not be reproduced, distributed, transmitted, cached or otherwise used, except with prior written permission of Futurism. Fonts by Typekit and Monotype.