Guess The Planet - Answer and Explanation 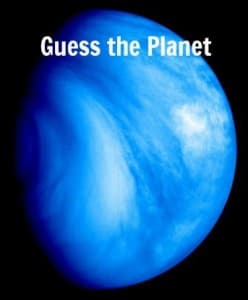 Can you identify which planet was photographed in this image?

Surprise, it's Venus! Yes, yes. We know. This was totally a trick question. Obviously, Venus is not blue. In fact, it kind of looks like a huge streaky pearl, as it has an extremely thick atmosphere that is chock-full of all kinds of undesirable gases (primarily carbon dioxide). Just a bit further down past the atmosphere of Venus are clouds composed of sulfur dioxide, which are opaque to visible light. Therefore, imaging the surface of Venus from space is a pretty difficult endeavor; only the Venera probes have ever directly imaged the surface of Earth's evil twin, and those projects ended back in the 1980's. However, using various filters to see light in different wavelengths, we can discern the true nature of objects that are shrouded in gas or dust clouds.

This image is of Venus' southern hemisphere, taken in ultraviolet by ESA's "Venus Express".

Okay, first... It's obviously a planet that has a substantial, active atmosphere, which instantly rules out both Mercury and Mars.

Second: There is no land mass , which rules out Earth. (Though it is entirely possible to take an image of Earth that shows very little land, which you can see below)

Third: Jupiter has a myriad of clouds and belts that extend throughout its atmosphere, which rules it out.

Fourth: Saturn has a huge, intricate system of rings that would be visible based on the angle of this photo.

This narrows it down to Neptune, Uranus and Venus. We can further eliminate both Neptune and Uranus simply because none of the outer gas giants of our solar system go through discernible phases like the inner planets (and the moon) do.

Congratulations to all of you that chose the correct one! Hope you learned something today!

You can see more images taken through the Venus Express program here.