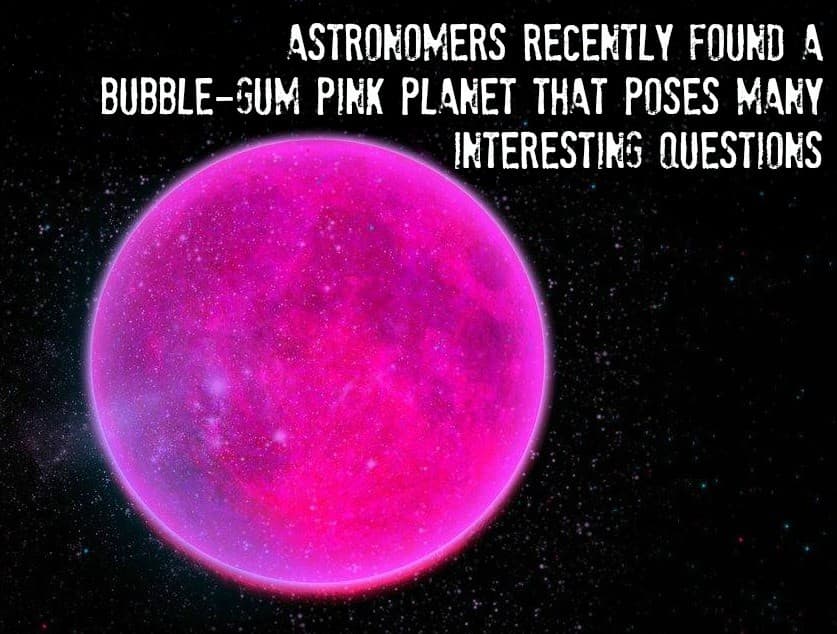 For those of you who love the color pink, you might enjoy a recent discovery in the world of astronomy. NASA scientists have discovered a gas giant planet around four times the size of Jupiter, 57 light years away from Earth. The large exoplanet, which orbits the Sun-like star; 59 Virginis (GJ 504), is making scientists question prior theories about planetary formation. Also, did I mention it was pink?

59 Virginis is a G-type main-sequence star located in the constellation Virgo. Discovered around 1538, the star can be seen with the naked eye in most places around Earth. Since the star goes by many names (59 Virginis, e Virginis, HR 5011, etc) we’ll be referring to it as GJ 504.

In 2011-2012 the SEEDS survey, using the Suburu Telescope in Hawaii, turned its eye on the GJ 504 system. The SEEDS ('Strategic Exploration of Exoplanets and Disk') survey, which uses the Suburu 8.2 meter telescope to directly image extrasolar stars, extrasolar planets, and planetary disks,  soon discovered a peculiar planet around the G-type star.

This peculiar Jovian planet, known as GJ 504 b, is approximately four times the size of Jupiter. The solar system of the planet is deemed to be around 100-200 million years old, relatively young (in cosmic time). Because of the planet’s youth, it is still undergoing changes. Also, according to near-infrared cameras, the atmosphere may have fewer clouds than most previously observed gas-giants. Another point for astronomers everywhere!

“If we could travel to this giant planet, we would see a world still glowing from the heat of its formation with a color reminiscent of a dark cheery blossom, a dull magenta,” says Michael McElwain, a member of the discovery team at NASA’s Goddard Space Flight Center in Greenbelt, Maryland. (Quotation Reference)

The planet is one of the youngest planets directly imaged from Earth and…it’s pink! No, it’s not made out of bubble gum, but it’s still unusual. The planet is around 43.5 AU from the host star, around nine times the distance between Jupiter and our sun.

According to the currently accepted model, known as the core-accretion model, gas-giant planets form from the gas-rich leftovers of their host stars from distances approximately where Jupiter is located from the Sun, to where Neptune orbits (around 30 AU). Since GJ 504 b goes well beyond that range, the planet goes against all prior planetary formation theories.

Markus Janson, a Hubble postdoc at Princeton University, explained that “[GJ 504 b] is among the hardest planets to explain in a traditional planet-formation framework. Its discovery implies that we need to seriously consider alternative formation theories, or perhaps to reassess some of the basic assumptions in the core-accretion theory."(Quotation Reference)

Scientists are finding more and more exoplanets that test the theories we have been so confident with for many years. While we continue to find many more planets outside our solar neighborhood, we learn more about the universe we live in and just how different our solar system really is. And although not all of planets resemble bubble gum, they are all equally interesting and different from one another.

If you are interested in extrasolar solar systems, possible other Earths, or just curious about the universe you live in, you can visit: http://planetquest.jpl.nasa.gov/