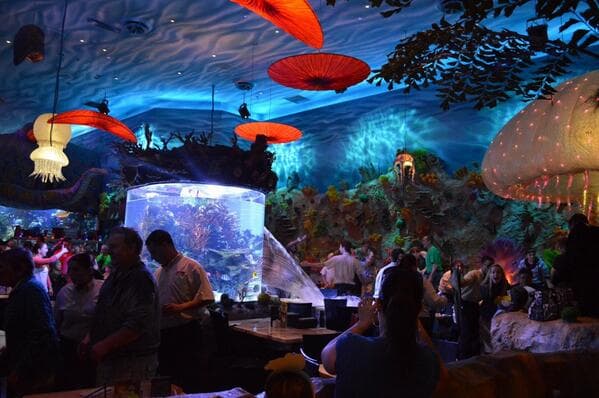 Monday afternoon, (March 17, 2014) a giant fish tank at the T-Rex Cafe in Orlando's Downtown Disney area cracked open. In the image, you can see that many of the diners were more concerned about filming the event than they were rescuing the fish or seeing what they could do to assist. Fortunately, quick thinking employees rushed in to save the creatures that were housed in the tank, and they herded diners away from the gushing water.

Watch the event unfold in the video below:

Landry's, the Houston company that owns T-Rex Cafe, issued this statement about the incident: "A seal failed on the tank causing water to leak. Employees took action and did a great job rescuing all of the marine life, caring for our guests and managing the situation. The marine life has been moved to holding tanks and the restaurant is open for business as usual.''

Fortunately, no creatures (human or fish) were harmed during this incident.

Local aquarium builder and owner of Looking Glass Aquarium, Bill Hamel, watched the cellphone video that was captured by a witness and states, "A lot of people when they make a cylinder, they'll take two half circles and glue them together," Hamel said. "You can tell that's a seam that has popped based on how narrow the water is that's shooting out." Ultimately, over time, weak spots become vulnerable under the water's pressure. That's why he said seamless tanks are ideal. Although it may seem that instances like this a rare, Hamel asserts, "I've seen that happen quite a bit with cylinder tanks."