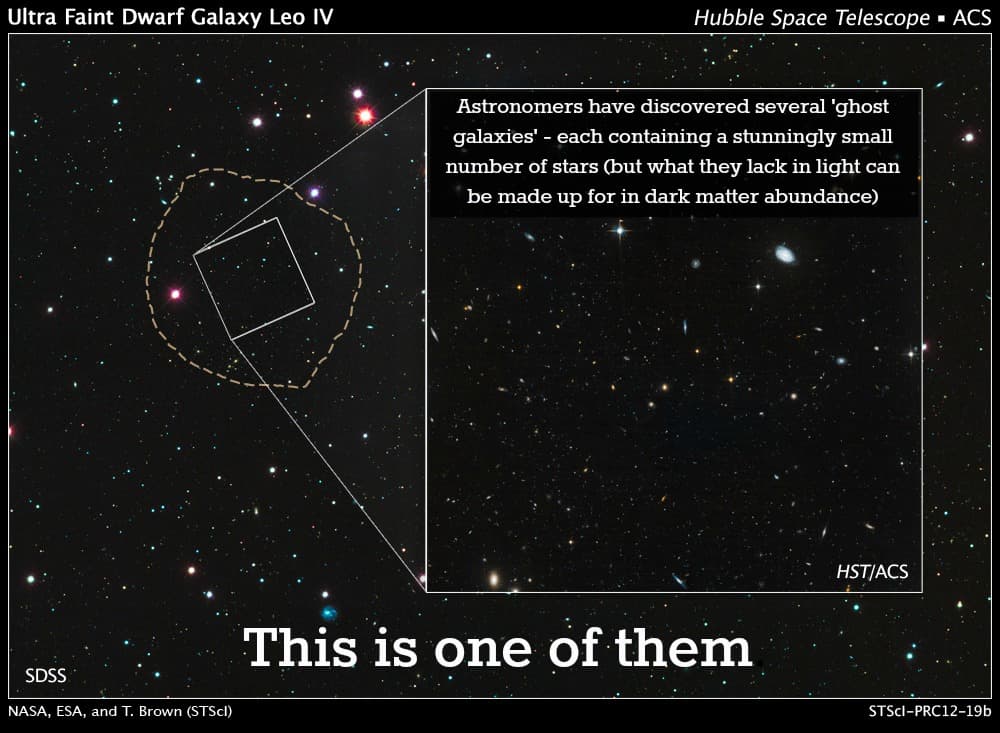 See this lovely image to the right? Any guesses as to what you are looking at? (Hint: It's not the Hubble Ultra Deep Field or any similar image) What may look like nothing, for all intents and purposes, is actually a full blown galaxy -- with a twist. This galaxy is almost lacking in stars entirely.

You see.. There are ghosts all around us, that is, assuming your definition of a ghost extends to extremely faint galaxies with very few stars; and by very few, I do mean very few. You could probably count the number of stars in these galaxies within minutes, as these galaxies contain hundreds, or maybe a couple thousands, of stars. That’s right, we are talking about numbers 3 or 4 digits long -- numbers that probably resemble your bank account. (In contrast, our galaxy - the Milky Way - contains an estimated 400 billion stars) These so-called "ghost galaxies" have intrigued astronomers for several years now.

The galaxy pictured here is one of the most famous examples a 'ghost galaxy' -- called Leo IV. (Another well known one is NGC 2915)The galaxy itself can actually be classified as our celestial neighbor, being that it can be found approximately 500,000 light-years from Earth.  Astronomers estimate that Leo Iv contains merely 1,000 stars - all in various stages of stellar evolution. Most are very dim and vague, which make it all the more difficult for astronomers to discern where the boundaries of the galaxy lie.  It also poses a problem when trying to determine the galaxy's size. As far as astronomers can tell, the galaxy measures in at 1100 light-years wide. The small white box provides a basic outline of the galaxy's shape and size.

One of the reasons the galaxies are so interesting is because they are nearly perfectly preserved fossils of the early universe -- having formed an estimated  one-billion years after the big bang. Then, suddenly, the ghost galaxies stopped producing new stars. Because of this, they are tiny, faint, and have changed very little in several billion years.

Just like the hydra from the Herculean legend, it seems when scientists answer one question about these strange galaxies, two more questions spring up in its place. Either way, unwrapping the enigma of ghost galaxies will give us valuable insight into the transitional period between ghost galaxies and galaxies teeming with the light of billions of baby stars. Furthermore, they may help clue us in on the origin of the dark matter that pervades spacetime.