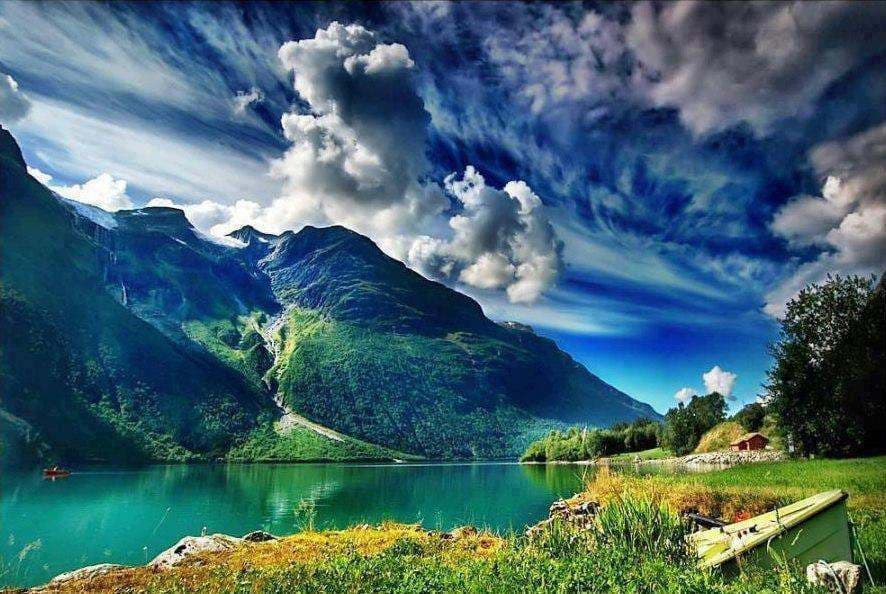 In case the title alone didn't give it away, this is the Geiranger Fjord region, found in Møre og Romsdal county, Norway. It, for obvious reasons, is a hot spot for tourist activity. It's so beautiful, in fact, that, in 2005, it was listed as a UNESCO World Heritage Site, but like many things in this day and age, technological progression threatens to make its mark on a region with unmarred beauty.

Other than Geiranger Fjord, there are a few more Norwegian fjords that rival its beauty, called Nærøyfjord and Geirangerfjord (both are also listed as World Heritage Sites). Fjords, in a geological sense, are long and narrow inlets that form in valleys in response to glacial retreating.

Overall, it spans over an area roughly 9.3 miles (5 kilometers) long, connecting to the Sunnylvsfjorden fjord. It, in turn, branches off from the Great Fjord (officially known as Sunnylvsfjorden). As mentioned above, these so-called fjords are created as the result of glacial activity, but to expand on that, these fjords were forged into narrow and steep crystalline rock formations —which extend more than 1,640 feet (500 meters) below sea level and rise some 4,593 feet (1,400 meters) from the sea bed, at least in this example — when glacial bodies shrunk (or retreated). This led to the corrosion of u-shaped valleys that make up fjords (as a fun-aside, Norway has a higher concentration of them than any other place on Earth).

Some of the drop-offs are fed by free-flowing rivers that make their way throughout the forest, places where crystal-clear waters cascade down the rock walls, falling right into the small village known as Geiranger (the Geirangelva river empties into the basin of the village too).

Also located nearby is a waterfall feature commonly known as the Seven Sisters (seen above to the right). Although you can't see it clearly in this image (I chose it because of it highlights the beauty of this serene region to the point that you just want to pop up a hammock and curl up with a book), but,as the name suggests, the falls consists of seven separate streams, with the tallest measuring in at an impressive 820 feet (250 meters) high. (This only makes it the 39th tallest waterfall in all of Norway)

If you're ever in the area, the waterfalls are about 4 miles (6.5 kilometers) west of Geiranger village. However, the view of the falls can vary greatly based on the water-levels and the time of year, so plan accordingly. You also might also want to do that sooner rather than later, as the village itself remains in constant danger from a neighboring mountain. At any given moment, an avalanche could befall and unleash a tsunami large enough to wipe out the entire village.

See more images here, or learn about another great landmark in Norway, Trolltunga.

This mini-feature is part of a series, entitled "Earth: The Pale Blue Dot", which explores and highlights some of the most amazing and beautiful natural features mother Earth has to offer.