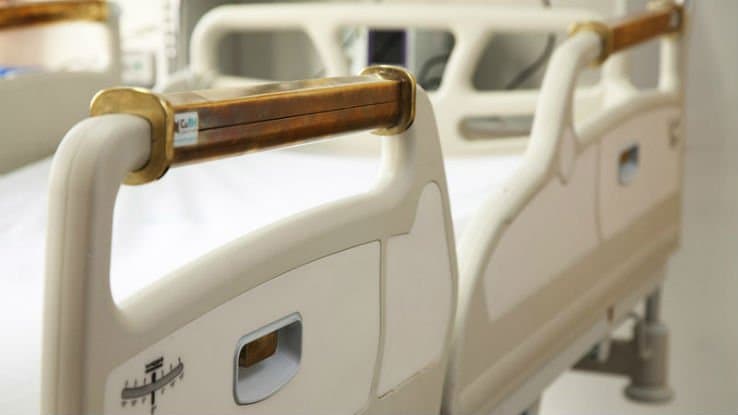 Hospitals have a serious issue. And unsurprisingly, that issue is infections. Unfortunately, many of these infections are caused by the hospital itself. According to the Center for Disease Control (CDC) in the Unites States, one in 25 hospital patients are affected by hospital-related infections, such as pneumonia, urinary tract infections, and methicillin-resistant Staphylococcus aureus (MRSA), and it costs $40 billion a year to treat them. There were an estimated 722,000 hospital related infections in United State's acute care hospitals in 2011, and some 75,000 hospital patients with these infections died during their hospitalizations.

It is estimated that some 80% of these infections are spread because of surface contact in hospitals. While some of the dirtiest things are TV remotes, which are handled by everyone and hard to sanitize, other common surfaces (like bed rails) come in a very close second. Indeed, the railing on patient's beds are believed to be one of the largest concerns.

Now, Copper BioHealth has installed 150 copper bed rails in four hospitals in an attempt to turn the tide on these statistics. "Bacteria, yeasts and viruses are rapidly killed on metallic copper surfaces, and the term 'contact killing’ has been coined for this process,” researcher Constanza Correa and her team report in the journal Applied and Environmental Microbiology. It is hoped that this new addition will help make patients safer. indeed, in a report published in journal Infection Control and Hospital Epidemiology, a team led by Cassandra D. Salgado from the Medical University of South Carolina in the US, reported that the presence of copper bed rails "reduced the number of healthcare-acquired infections from 8.1 percent in regular rooms to 3.4 percent in the copper rooms."

As Correa puts it, “copper kills everything." But unfortunately, we aren't entirely sure why, which makes application a tad tricky. However, some have suggested that when the single-cell bacterium comes into contact with a copper surface, the bacteria's outer membrane ruptures and becomes full of holes as a result of a voltage difference between the inside and outside of the bacteria. “It is strongly suspected that when a bacterium comes in contact with a copper surface, a short circuiting of the current in the cell membrane can occur,” says the ICA. "This weakens the membrane and creates holes.” After this, copper ions start rushing into the holes and stop it in its tracks.

Of course, this won't completely fix the issue. But if successful, it will be a notable step in the right direction, and perhaps give us new ways of combating infections. Additional research into how and why copper is so effective at killing bacteria could also add great new insights.