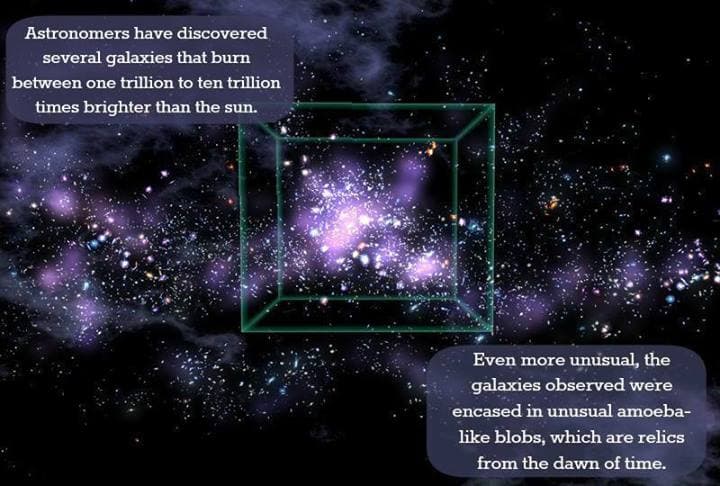 When the universe was still a wee lad (mere hundreds of thousands of years in age) it was drastically different than what we see today. For one, the universe was much smaller, a little hotter, and much more chaotic. This can easily be confirmed by looking at some of the most distant objects lurking on the edge of our light horizon.

The "light horizon" is the region of space close enough for the light emitted from the objects that reside there to have the needed time to travel through the expanse of space and reach Earth. These objects can be observed using our telescopes. For any objects beyond the light horizon, not enough time has passed for their light to have time to reach us.

As we know, light travels at a finite speed, meaning that there is a direct correlation between the relative age of objects and their distance from us (at least as far as deep space is concerned). Literally, the most distant objects we see are also some of the oldest, their light began the epic journey to Earth during a period in time that passed long, long ago. Yet, the light signatures of these objects (which may or may not exist anymore) bear the secrets of the earliest epoch after the big bang.

One of the most unusual types of structures we've ever observed are located in the inner cusp of the observable universe, called Lyman-alpha Blobs (a simulation of one of these so-called blobs is attached to this article). These bright celestial structures, composed of hot hydrogen gas, tend to form massive halos around embedded galaxies (some can grow more than ten times larger than the host galaxy itself).

One of the most notable blobs, called Himiko (named after the legendary Japanese queen), came into existence less than 800 million years after the big bang. A stunningly early period of time for such a massive object to form, as the recombination era (when the universe cooled enough for electrons and protons to combine to form hydrogen atoms) took place when the universe was 300,000 years in age.

These structures were first noted because of their penchant for emitting large quantities of radiation in the Lyman-alpha emission line of the ultraviolet portion of the electromagnetic spectrum (something that normally would not be seen at optical wavelengths, but can in this case because of the extreme redshift caused by the expansion of the universe). Keeping all of this in mind, since the discovery of the first Lyman-alpha blob, astronomers have detected several galaxies that burn more than a trillion times brighter than our sun, each located inside of the mysterious structures.

Astronomers still have little insight into the mechanism responsible for powering the blobs with so much energy, but the brightest gas-rich enclosed galaxies may become as such through galactic mergers. To some, this may be representative of the initial stages of primordial galaxy formation, or perhaps, the blobs are merely some sort of massive accretion disks (these accretion disks would be created from the output of a large quantity of energetic central black holes).