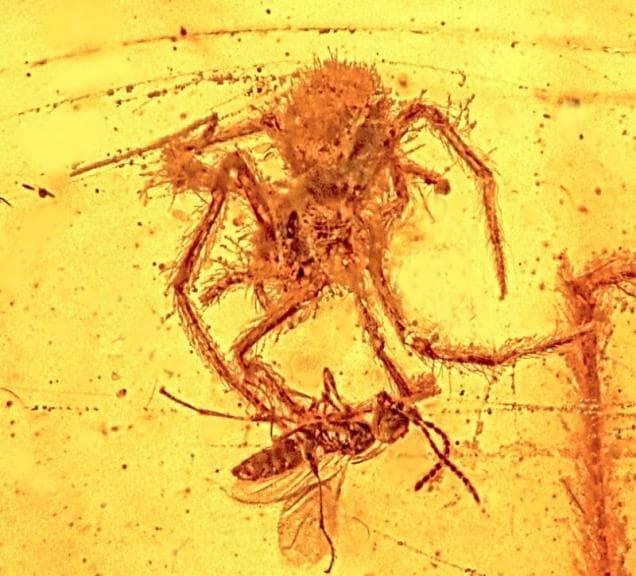 In 2012, researchers discovered a bit of amber that contained quite a surprise. Trapped within is an ancient battle scene: A spider attacking a wasp. This confrontation dates back some 110 million years. George Poinar, a zoology professor, and Ron Buckley, an amber collector, described the find in a paper published in the Journal of Historical Biology. They acknowledge that, though there are several examples in the paleontologist record of amber-trapped insects caught in webs, "there is no previous fossil record of a spider attacking its ensnared prey."

The piece, which dates back to the age of dinosaurs, was excavated in a Burmese mine and comes from the Early Cretaceous period, between 97 million and 110 million years ago. Unsurprisingly, both the spider and wasp species are now extinct (Geratonephila burmanica and Cascoscelio incassus, respectively).

This discovery is also notable because there are 15 intact strands of spider silk and another male spider contained within the amber. This offers important insights into the ancient habits of spiders, as many modern spiders are loners. Indeed, when two spiders meet they often fight and resort to cannibalism. Consequently, have two males on the same web is rather remarkable.

"This juvenile spider was going to make a meal out of a tiny parasitic wasp, but never quite got to it," Poinar said in a statement. "This was a male wasp that suddenly found itself trapped in a spider web. This was the wasp's worst nightmare, and it never ended. The wasp was watching the spider just as it was about to be attacked, when tree resin flowed over and captured both of them."