It could be "a breakthrough from a biological science perspective." 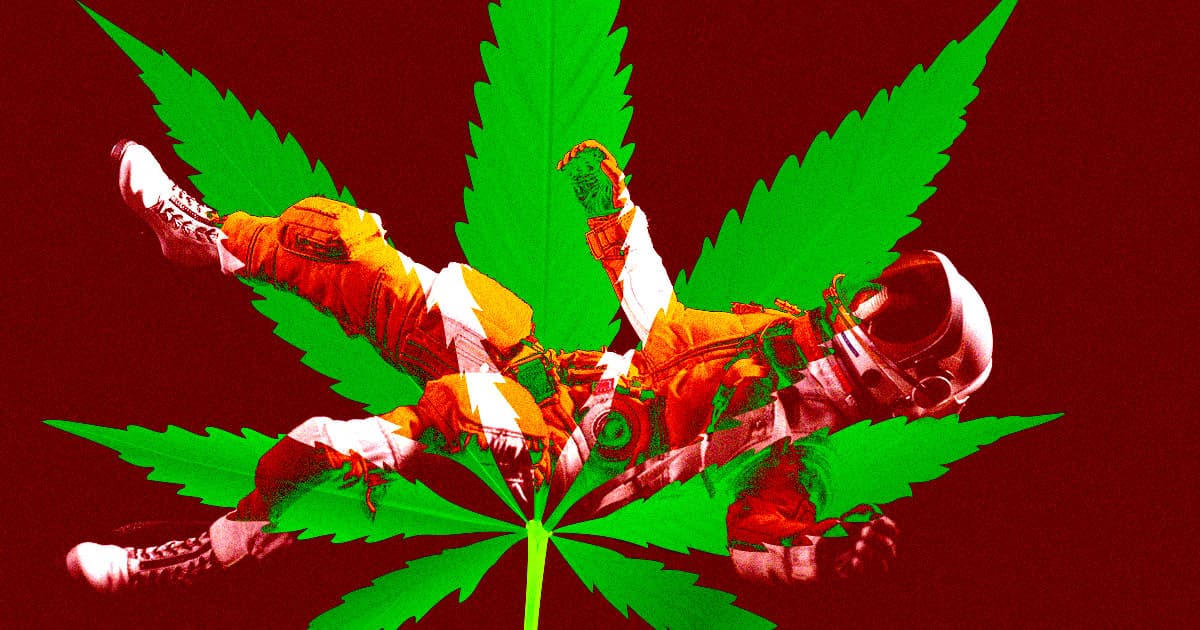 But that may not always be the case. With the advent of space tourism and the precipitously falling costs of launching travelers into orbit, the idea of a recreational spacecation is starting to sound less far fetched than it did even a decade ago.

And speaking of recreational activities, off world tourism raises the intriguing possibility of, well, doing drugs in space.

"People have been chewing on mushrooms and various types of roots and berries for forever," retired Canadian astronaut Chris Hadfield told Futurism, "and so there's always a role in society or human behavior for that."

Hadfield has flown on the NASA Space Shuttle and Russian Soyuz, as well as spending time on both the Russian space station Mir and the International Space Station. He's also extremely chill, having become a social media sensation posting photos and videos of life on the ISS, and even releasing an album of guitar songs recorded there.

Perhaps riffing on that effortless sense of cool, a popular meme shows a photoshopped Hadfield holding a large bag of marijuana in space, a finger to his lips signaling a little secret with the viewer.

In reality, Hadfield says, any type of impairment in space would currently present too great a liability.

"On the space station, if there's an emergency, you are the fire department," he said. "You can't have intoxicated yourself or inebriated yourself or whatever, just because if something goes wrong, then you'll die."

But that doesn't mean he isn't looking ahead to a day when space gets crowded enough that astronauts can punch out and unwind.

It's possible that Hadfield himself will end up ushering in part of that future. Last year, for instance, he joined the board of advisers of a biotech technology company called BioHarvest.

The firm has "worked with [cannabis] for years," he told Futurism, and has found a novel way to grow trichomes, which are the "little active part that you're actually trying to grow" using bioreactors, like lab-grown meat.

In other words, rather than wasting resources on water, pesticides, and other resources needed to grow the "very finnicky plant," as Hadfield put it, bioreactors could allow future astronauts to cut right to the chase.

"It's actually replicating the natural growing process of the the part that is of use to us but without the whole plant," Hadfield explained.

In August, BioHarvest announced it had found a new way to reliably create stable coral-like structures of multiple cannabis trichomes, a process that it says could potentially "revolutionize the production of cannabis."

Hadfield was quick to point that while there's certainly a case to be made for recreational use of cannabis in space, it's not the "original design intent" of BioHarvest's tech, despite having "great potential."

Besides, BioHarvest CEO Ilan Sobel told Futurism, "the substance is not yet regulated for the International Space Station."

But "once cannabis becomes federally legal across the USA," according to Sobel, BioHarvest's cannabinoid-growing process "may present a breakthrough from a biological science perspective" in a microgravity environment.

In fact, space might even be the perfect environment to produce out-of-this-world, medical-grade cannabinoids.

"We see the potential ability for valuable minor cannabinoids to be grown at significantly higher quantities compared to its growth on Earth," Sobel said.

For now, the emphasis is still very much on medical applications.

"These unique compositions of full-spectrum cannabis could have significant value in providing more optimized treatment solutions for many palliative diseases where current pharma synthesized compounds are not delivering adequate solutions," Sobel said.

For now, BioHarvest is focusing its efforts on providing future astronauts — and humans back on the ground — with microgravity-enhanced nutrients, rather than a way to get high.

To do that, the company is working with another startup called Space Tango to "modify its bioreactors for usage in the International Space Station," according to Sobel.

BioHarvest says that products like VINIA, a supplement derived from red grape cells, has been "clinically proven to bring significant cardiovascular benefits." That could be a boon to astronauts, Sobel said, who are "required to be in peak physical condition at all times during their space travels."

"They are required to consume key nutrients to maintain their overall physical and mental performance," he added.

"The big advantage to growing cells in a culture medium is that for a given calorie of energy, or for a given dose of nutrient, it is more efficient in terms of mass and volume," Space Tango CEO Alain Berinstain told us. "It is also possible that growing nutrients will be necessary for space travelers on long duration voyages."

That's more or less what caught the interest of Hadfield as well.

"What really drew me to BioHarvest was the scalability of the biotech platform, and how it can solve a lot of the agricultural problems we face in feeding 10 billion people," he told Futurism.

Cannabinoids are just "one of the things we grow," he added. And recreational marijuana in space, he reckons, is still a "long ways out."

More on cannabis in space: SpaceX Is Delivering Cannabis to the Space Station

Read This Next
And He Scores
We Are Completely Puzzled by This Video of a Chinese Astronaut Playing Ping-Pong in Space
Monkey Business
China Plans to Send Monkeys to Space Station to Have Sex With Each Other
Overview Effect
William Shatner Says His Space Trip Left Him With a Feeling of Terrible Grief
Sad ROSS
Russia's New Space Station Gets Sadder the More We Hear About It
Astronaut Drip
We Just Got the First Peek at NASA's Artemis Moon Landing Suits
More on Off World
Heavy Metal
Yesterday on the byte
NASA Mars Rover Finds Metallic Object That Smashed Down on Surface
Small But Mighty
Yesterday on the byte
Baby Asteroid Photobombs James Webb On Accident
Little Guy
Yesterday on the byte
Scientists Prototype "Creeping" Lizard-Like Robot for Exploring Mars
READ MORE STORIES ABOUT / Off World
Keep up.
Subscribe to our daily newsletter to keep in touch with the subjects shaping our future.
+Social+Newsletter
TopicsAbout UsContact Us
Copyright ©, Camden Media Inc All Rights Reserved. See our User Agreement, Privacy Policy and Data Use Policy. The material on this site may not be reproduced, distributed, transmitted, cached or otherwise used, except with prior written permission of Futurism. Articles may contain affiliate links which enable us to share in the revenue of any purchases made.
Fonts by Typekit and Monotype.