The Formation of Stellar Mass Black Holes: The Making of Energetic Destroyers 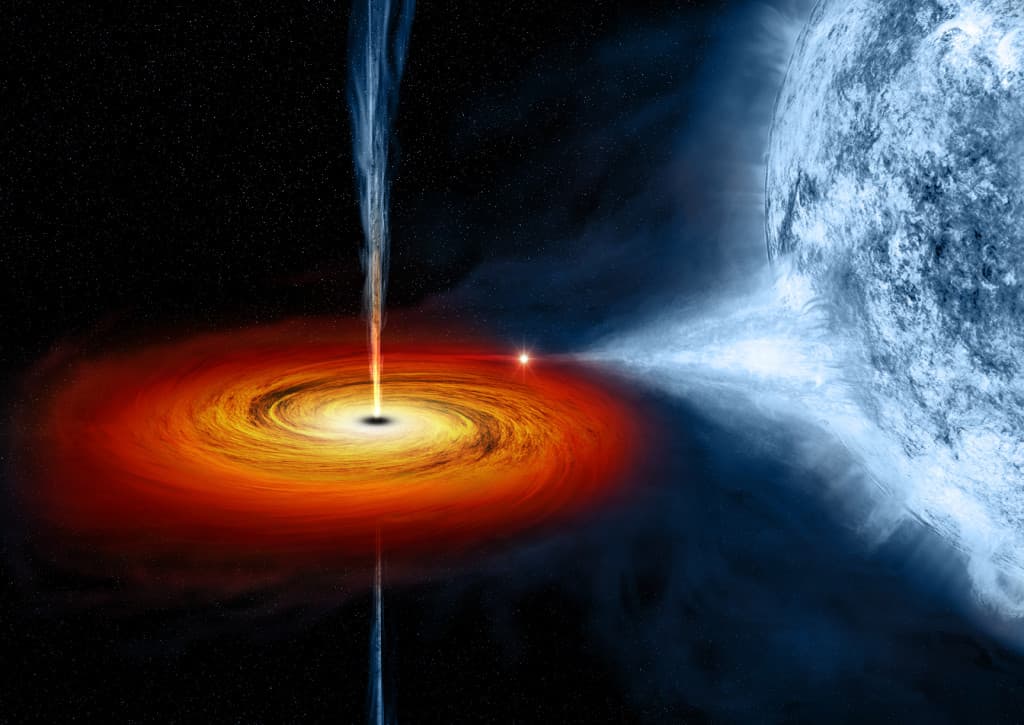 The formation of  a stellar mass black hole is a very chaotic and energetic event. Really though, there isn't much that involves black holes that isn't chaotic or energetic. Stellar mass black holes have a minimum mass of around 3.2 times that of our sun (3.2 solar masses). I say "around" because, due to our lack of understanding of neutron degeneracy thresholds, we don't quite know where the boundary is between neutron stars and black holes. At the moment, 3.2 solar masses is a good guesstimate, as it fits snugly in between the most massive neutron star and smallest black hole ever discovered.

There are three processes that can form a stellar mass black hole; each one is amazing in its own right. Today, we are going to look at comic collisions and epic mergers, and how these processes contribute to the birth of the most destructive objects in the known universe.

These black holes can form from the following ways:

Today, we are going to take a look at mergers. Let's start off by discussing neutron stars collapsing into a black holes. First and foremost, neutron stars cannot just spontaneously form black holes, just as a white dwarf cannot randomly become a neutron star. Both white dwarfs and neutron stars can only collapse further when their electron or neutron degeneracy (respectively) can no longer hold them up. An increase in mass is all it takes to tip them over the edge. When stars form, 50-75% of the time, they form multiple star systems, usually a binary star system.

Stars with the mass of:

Thus, during this period, we are more likely to have black holes form as a result of binary star systems of white dwarfs and neutron stars. So, imagine that we have a binary system with a 7 and a 16 solar mass star. In theory, these should leave a white dwarf and neutron star, respectively. As the 16 solar mass star is more massive, it will burn out faster. This is a rough measure is known as the Mass-Luminosity Function, where: L= M^3.5

On average, a star will happily fuse away hydrogen into helium for about 90% of its lifetime. Our Sun for instance, it will remain on the main sequence for 10 billion years. Then it'll begin helium burning, intermittent hydrogen and helium burning, this will last for a further billion years. Following this, for the first 10 million years of this binary system, nothing much will happen. They will remain orbiting one another, quite boring really. After this however, the more massive star will fall off the main sequence and begin helium burning, after that it'll continue fusing more and more elements until it has an iron core. When the helium fusion stars, it has become a red supergiant.

Once the more massive star falls off the main sequence, it will expand a lot. Depending on it's composition (metallicity), it could expand to several AU in diameter! When this happens (if our two theoretical stars were separated by 20 AU, given their size), we end up with an intriguing occurrence--Vampire stars! With the outer envelope of the more massive star encroaching on the gravitational well of the less massive star, we could end up with what is known as a Roche Lobe. This is the point where one star steals matter from its companion, where the gas is gravitationally more attracted to the companion than the parent star.

For the next million or so years, the less massive star will steal some of the outer envelope from the more massive star. Depending on the rate of transfer, this can change the colour of the less massive companion. This occurrence has been observed with Blue Stragglers in globular clusters. Eventually, the more massive star will go off in a supernova, leaving behind a neutron star. Then another long wait--a 66 million year long wait, in fact. So far, it has been roughly 11 million years after the initial formation of our hypothetical stars; we now have a neutron star that is extremely close to a 7-ish solar mass star that is still on its main sequence. Just as a side note, because one star removed material from another star, both stars evolution will be slightly affected, this is what super-computers are for.

Then, once 66 million years have now gone, the 7-ish solar mass star moves off the main sequence and expands into a red giant. Now the tables have turned, with the outer envelope having expanded out quite some distance, the neutron star can now begin accreting material. This is the moment we've been waiting for. Now that the neutron star is accreting material, it can potentially be tipped over the edge (~3.2 solar masses) and collapse into a black hole. This is another instance where a super-computer is required, simulations are the only way to give a  definitive "yes" or "no" when asking whether an object will form a black hole. The neutron star will either continue accreting material until it becomes a black hole, or it'll remain a neutron star. Either way, while it is accreting, it will become a millisecond pulsar (only a pulsar if it is pointed towards us).

This is how a black hole can be formed through accretion. What about a merger?

So let's take a 1.38 solar mass white dwarf and a 2.9 solar mass neutron star (just making guesstimate numbers). Both are situated in the middle of a beautiful planetary nebula. How close the two objects are determines if they'll eventually merge. If they are far enough apart, they'll continue orbiting one another. If they get too close, they'll start losing angular momentum through gravitational waves (this is where the fun part comes in).

As they emit gravitational waves (which we have yet to actually detect), they will spiral in towards one another. When the white dwarf reaches the neutron stars Roche Limit, the white dwarf will begin to be accreted i.e., torn apart! They will both eventually merge, this process will emit copious amounts of energy. It would likely not be enough to be classed as a Short Gamma-Ray Burst (SGRB). But it would be a lot of energy regardless, and probably look like a strange Type 1a supernova.

Stellar mass black holes are very difficult to detect. We cannot physically see a black hole, but we can detect their accretion disk. There are a number of ways that they can form; mergers are the more interesting way, in my opinion. What's more, mergers happen fairly often on a cosmic scale. Every SGRB that we detect is, as far as we know, the merger of two neutron stars or a neutron star and a black hole (as an interesting aside, a type 1a supernova typically occur when two white dwarfs merge).

Either way, the universe is a very chaotic and energetic place...that is a part of what makes it so interesting.