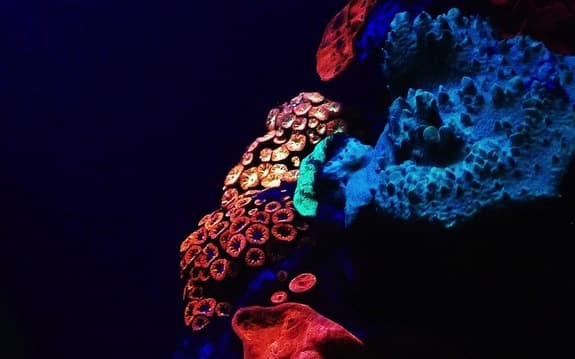 With surface water temperatures sizzling at 34° Celsius (93°F) and a 1,240 mile (2,000 km) coastal stretch of sumptuous coral reefs, it’s easy to see why the Red Sea attracts thousands of visitors each summer.

Booking your flight yet?

The new study, conducted off the coast of Eilat, Israel, reports on the vibrant coral display between 50 and 60 m—the corals here can be found glowing shades of green, yellow, and red. In contrast, the international team of scientists note a lack of yellow and red coral in shallower Eilat reefs (between 0.5 and 3m) where green specimens predominate.

Why Do They Glow?

Technically speaking, the process by which corals ‘glow’ is known as "fluorescence" and is carried out by special protein pigments. Ultraviolet or blue light is taken up by these proteins and then re-emitted at longer wavelengths, such as green and red, giving rise to the spectacular colorations typical of coral reefs.

Some fluorescent proteins, specifically those with green and cyan light, serve as a form of sunscreen, protecting shallow-dwelling corals from the intense light in tropical locales (how kind of nature to supply corals with their own modified form of sun cream).

The question remains, however, why do corals fluoresce so deep in the Red Sea? After all, they certainly don’t have to worry about hazardous light exposure 60 m below the surface—even in the clearest of waters. But as it turns out, the scientists behind the study think the fluorescence of mesophotic corals (that’s a fancy term used to describe corals living between 40 and 100 m) fulfills some vital function.

So, what is the role of these pigments from the deep?

Well, coral experts have numerous theories. One concept states that the fluorescent proteins deliver more light to tiny photosynthetic algae that live in partnership with corals. An enhanced light environment means more energy produced by the algae and, crucially, a healthier coral.

Another idea suggests that the protein pigments are important in the visual behavior of reef fish.

More Than Just a Pretty Pigment:

So fluorescent pigments not only produce the stunning appearance of mesophotic corals, but may also help them thrive in dim waters, such as those 60 m into the Red Sea.

As if that wasn't enough, researchers that surveyed the corals believe the newly found proteins can even help biologists visualize processes inside living cells. Genes for fluorescent proteins can be anchored next to genes biologists want to study. When the gene of interest is active, the attached protein is primed and ready to glow. Turn on the right shade of light and the protein glows its characteristic color. This process allows scientists to track particular genes and see them at work inside living cells. Cool eh?

However, the future of corals may not be as bright as their dazzling proteins. In fact, rising ocean temperatures, which come as a result of climate change, spells bad news for coral, forcing the essential algae to abandon the coral host. No algae, no coral.

Fascinatingly, it could be coral's own fluorescent proteins that come to their rescue. The production of such pigments has been shown to be suppressed under heightened temperatures. This means that fluorescence can potentially be used as an indicator of coral health and help identify early signs of stress within a reef.

Further work like that conducted in the Red Sea is vital if scientists are to understand how corals will respond under global change and how the survival of these crucial glowing champions can be ensured.

Want to see more? Check out a psychedelic night dive from the depths of the Red Sea: