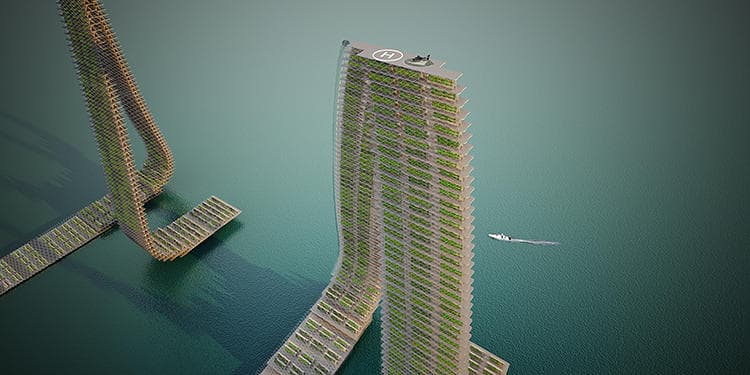 Skynet farming? Recently, Spanish architects developed a new system of farming—a floating vertical farm system to give Singapore (a country that has no land for farms) a way to produce its own food.

Each year, we watch as more and more Earth is claimed by cities and towns. Trees are leveled to make way for villages. Hills are leveled to make way for roads. The soil is upended so that we can uncover precious rocks and minerals. Fortunately, there are a number of individuals who are trying to slow this process. Although they cannot not restore dead habitats or solve our deforestation crisis with new, technological innovations, they can (perhaps) make things a little better.

Because the country has such a high population (close to 7,700 people per a square kilometer) it is forced to import a staggering 90% of its food. For comparison, the country is tiny, with just 276 square miles of land to house its population of 5.4 million; conversely, the state of Mississippi is a whopping 48,400 square miles and only has 3 million inhabitants. But Singapore's population issues might get a bit of a reprieve soon. Architects are working to produce a massive design based on principles that locals have been using for years. The design is based on the floating fish farms that have been used by Singapore locals since the 1930s

Architects from a firm called JAPA have designed a system of looping towers. These towers can float in Singapore's harbors and grow crops throughout the year. They are called FRA, which is short for "floating responsive architecture." Javier Ponce, principal from JAPA, recently discussed the designs:

We used the Sun as a design driver. The loop shape enables the vertical structure to receive more sunlight without having significant shadows. We believe these types of initiatives can be applied closer to the existing and new emerging urban centers in order to help mitigate the future food issue. This can transform a city's nearby territories into more stimulating environments, capable of self-producing quality food in order to avoid massive imports from abroad.

Perhaps most notably, the farms can contain a number of sensors that can monitor the crops--sending information on their status to networks in charge of looking after them. Also, the data could be used to monitor the food people are buying around the city, so the food produced by the farms could be adjusted accordingly.

Obviously these farms may still be years away from construction; however, the company is currently producing prototypes to test the viability of their design. If successful, it could revolutionize farming and give us a way to feed Earth's ever increasing population.

Hat tip to ScienceAlert for bringing this to our attention.