Fisher Space Pen: What Elon Musk and Jeff Bezos Will Use to Write in Zero Gravity

It even writes under water. 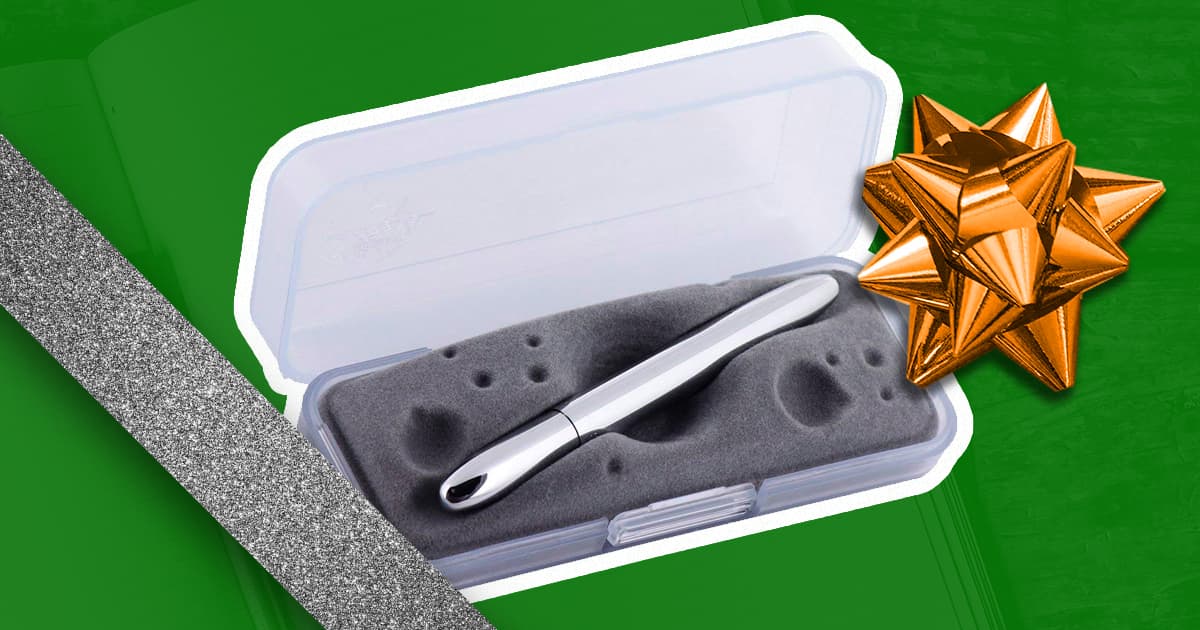 You can't use a pencil in space. That's the first thing to know about the Fisher Space Pen, and the reason for its existence, its persistence, and canonization in the history of industrial design and art pieces.

Because you know how zero gravity works, you obviously know that if even the smallest sliver of lead or wood were to break off, that sliver could become lodged into a control panel or an instrument, causing a problem nobody wants to have. You also know that a regular ballpoint pen wouldn't do the trick either, because the ink in the pen wouldn't naturally pull out of the bottom, such is the effect of zero gravity on any substance. Thus, the Space Pen.

Dreamed up in 1948 by a guy named Paul Fisher, the Fisher Space Pen was patented with the advent of the Pressurized Ink Cartridge, which are sealed, pressurized with nitrogen, and now coated in the kind of metal used to make—according to Fisher—armor-piercing ammunitions. Paul Fisher, in the 60s, ended up selling the pen to NASA, even though he didn't set out to make a pen for space. He just wanted something that wouldn't leak everywhere. And he ended up inventing a pen that can not only write in zero-gravity, but underwater, upside-down, wet surfaces, and extreme temperatures (-30ºF to +250ºF).

Since then, the Space Pen's become ubiquitous in culture—not just in spaceflight, where it's been used since the Apollo 7 missions. It's been in the Museum of Modern Art. It's been referenced in countless films and TV shows. And it's been used by a bunch of people to write things in places other than space. Thing is: More people will be going to space soon. NASA wants back on the Moon, and to Mars. Japan wants to build space elevators. Maybe you've heard of Elon Musk and Jeff Bezos? They're big on sending people to space these days.

So, if you're planning on going to space—or know anyone who is, or simply want to send someone a hint: buy them this pen. It writes in space. Also, underwater – if the hint you're trying to send them is "go to the bottom of the ocean and never return." Or just: "You're loved!"

The Fisher Space Pen is $17.79 on Amazon, and worth every penny.

Editor's note: To create this content, the editorial team sought out products we love without any consideration of payment. That said, if you buy a product through this page Futurism may receive a small commission, which helps us save up for a fleet of jetpacks.

Read This Next
Hall Effect
Test Suggests Ion Thrusters Could Power Crewed Interplanetary Missions
Rolling Coal
Space Travel Will Absolutely Gut the Environment, Scientists Warn
Brands We Love
‘Spaceteam’ Turns the Horrors of Deep Space Travel Into a Fun Card Game
Space Walk
Under Armour is Making Spacesuits for Virgin Galactic
Futurism
Here's What We Know About SpaceX's Crewed Dragon Spacecraft
More on Off World
CHON: Legacy
Yesterday on the byte
James Webb Discovers Coldest Ice in Known Universe, Harboring Molecules Essential For Life
Is There?
Yesterday on the byte
NASA Setting Up Facility For Mars Rock Samples That Might Contain Alien Life
Stunning Centaur
Jan 28 on the byte
James Webb Spots Asteroid With Its Own Saturn-Like Rings
READ MORE STORIES ABOUT / Off World
Keep up.
Subscribe to our daily newsletter to keep in touch with the subjects shaping our future.
+Social+Newsletter
TopicsAbout UsContact Us
Copyright ©, Camden Media Inc All Rights Reserved. See our User Agreement, Privacy Policy and Data Use Policy. The material on this site may not be reproduced, distributed, transmitted, cached or otherwise used, except with prior written permission of Futurism. Articles may contain affiliate links which enable us to share in the revenue of any purchases made.
Fonts by Typekit and Monotype.