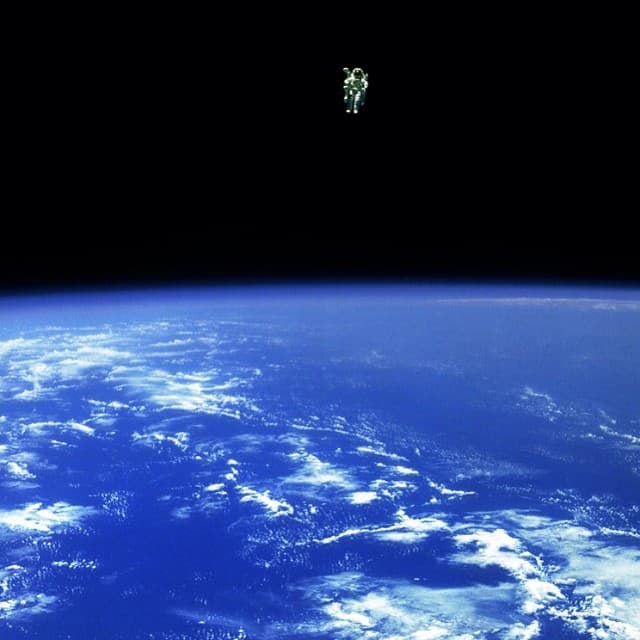 In this haunting image, we see a solitary astronaut, Bruce McCandless II, hovering in the inky darkness of space. Beneath him, the world spins slowly on, along with all the people and all the things that we've ever known. The photograph was captured during McCandless trip aboard the space shuttle Challenger on February 12, 1984.

During this jaunt out into space, McCandless ventured farther than any previous astronaut before him.

This accomplishment was ultimately made possible by the Manned Maneuvering Unit (MMU), which allows astronauts to make untethered free flights away from their spacecrafts (this was the first ever untethered free flight using the MMU). This device was used in several different maneuvering missions, culminating with STS-51-A, in which the propulsion unit was used to retrieve two communication satellites that did not reach their proper orbits because of faulty propulsion module. The astronauts were able to safely retrieve the satellites and return them to Earth.

After the Space Shuttle Challenger disaster, the MMU was judged too risky for further use, as there would be little anyone could do for an astronaut if the MMU suffered a major malfunction.

Although McCandless looks like a small speck  drifting a long way from the safe confines of his craft, he is actually only 320 feet (100 meters) from the Orbiter. Still, going into orbit is relatively risky business by itself, using a nitrogen jet propelled backpack to leave the safety of your craft and drift several hundred feet out into open space is probably a bit beyond the scope of what most would call rational.

But of course, McCandless didn't just hop on and take the MMU for a spin. He spent some time maneuvering near Challenger before voyaging out. You are probably a bit more familiar with the image of McCandless that is posted below. This close up image shows him just a short distance from the craft and in a position that seems far less perilous.

Being the first human to take a free floating ride though space is pretty awesome; however, McCandless is known for far more than being the astronaut to travel farthest from any link to planet Earth. For starters, he graduated second in a class of 899 from Annapolis, and over the course of his career, he received a host of awards and honors. Most notable are his Legion of Merit in 1988 and the Department of Defense Distinguished Service Medal in 1985. And that is just the start; McCandless has a host of other awards and honors attributed to him.

So despite the awesome sublimity of this image--the astounding and awe inspiring horror of being adrift miles above the Earth--the overall take away for me is simply, "look what one can do with a bit of hard work and courage."  True, sometimes (many times) humanity is depressing, but often, we are also terribly glorious.