They're suing Apple, Microsoft, Dell, Alphabet, and Tesla for "extreme abuse of innocent children on a large scale." 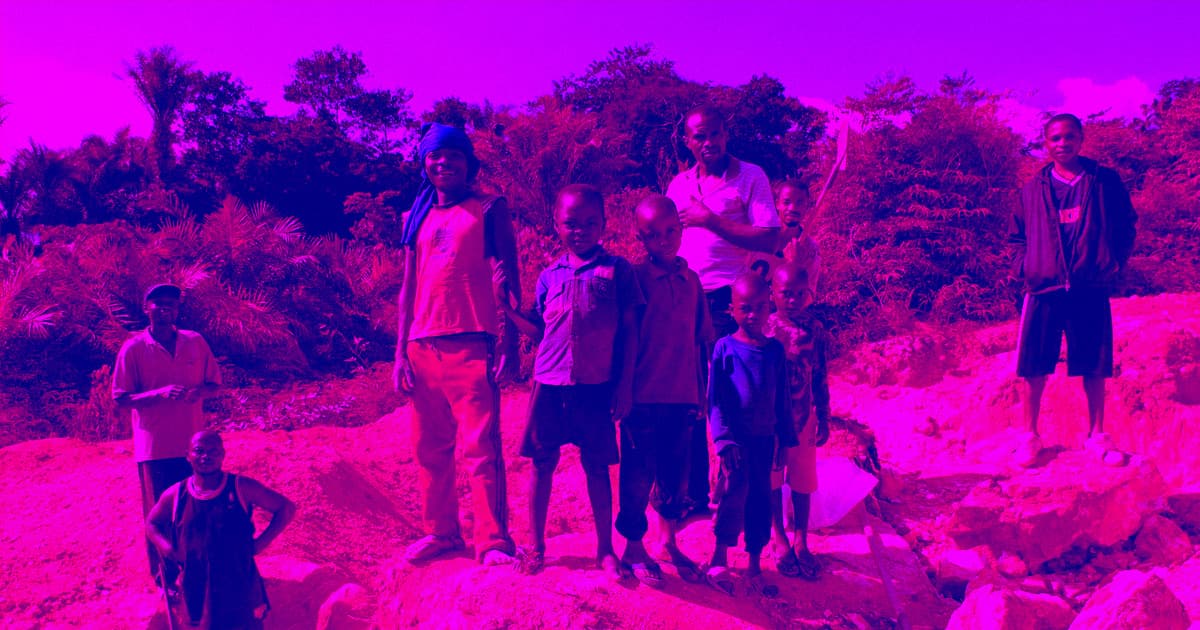 Cobalt is essential to making rechargeable lithium-ion batteries, which means the corporations selling everything from smartphones to electric cars need a steady supply of the metal — and that supply chain typically starts in the Democratic Republic of the Congo (DRC).

The poor central African nation currently exports more than 60 percent of the world's cobalt, and its use of child labor to mine the metal has been widely reported, with many investigations noting the dangerous conditions faced by child miners.

That's the context in which human rights firm International Rights Advocates filed a lawsuit Sunday in Washington D.C. against Apple, Microsoft, Dell, Alphabet, and Tesla on behalf of 14 parents and children from the DRC, alleging that the tech giants knew the cobalt they used to build their products was putting the lives of Congolese children in danger.

"The young children mining Defendants’ cobalt are not merely being forced to work full-time, extremely dangerous mining jobs at the expense [of] their educations and futures," the lawsuit reads. "They are being regularly maimed and killed by tunnel collapses and other known hazards common to cobalt mining in the DRC."

The lawsuit doesn't include the names of any of the plaintiffs, but it does note that some experienced life-changing injuries while working in the mines as children, often for about $2 per day. Other plaintiffs are the families of children who were hurt or even killed while mining cobalt.

The lawsuit includes heartbreaking details on the experiences of several children who worked in the mines, noting injuries ranging from crushed limbs to paralyzation. Some of the families lost their children when the tunnels they were digging in collapsed.

A Dell spokesperson told Futurism that the company is investigating the allegations.

"We have never knowingly sourced operations using any form of involuntary labor, fraudulent recruiting practices or child labor," they said. "We work with suppliers to manage their sourcing programs responsibly. Any supplier with reports of misconduct is investigated and, if misconduct is found, removed from our supply chain."

An Apple spokesperson, meanwhile, told Futurism that the company is committed to responsibly sourcing product materials and has established strict standards for suppliers.

"In 2014, we were the first to start mapping our cobalt supply chain to the mine level, and since 2016, we have published a full list of our identified cobalt refiners every year, 100 percent of which are participating in independent third party audits," they said. "If a refiner is unable or unwilling to meet our standards, they will be removed from our supply chain. We’ve removed 6 cobalt refiners in 2019."

None of the other defendants in the lawsuit responded to Futurism's request for comment by the time of publication. The plaintiffs’ lead counsel, Terry Collingsworth, however, did issue a statement.

"In my 35 years as a human rights lawyer, I’ve never seen such extreme abuse of innocent children on a large scale," he said. "This astounding cruelty and greed need to stop."

More on cobalt: Ingenious Gadget Could Harvest Battery Material From the Ocean

Read This Next
Keeping Score
Report: America Has a Social Credit System Much Like China's
Break 'em Up
Facebook Co-Founder: "It's Time to Break Up Facebook"
Futurism
We Need To Talk About How Human Rights Will Work in the Age of AI
Futurism
There's a Growing Movement to Give Everyone in the World Internet Access
Futurism
Why Cybersecurity Needs to Be Considered as an Absolute Human Right
More on Future Society
Bird Crap
6:30 PM on the byte
It Looks Like Elon Musk Is Actually Building a Twitter Payment Platform
Balloon News
Yesterday on futurism
China Says "Spy Balloon" Soaring Over America Is Completely Innocent
Down in Flames
Wednesday on the byte
Elon Musk Apparently Thinks Twitter Is a "Flaming Dumpster Rolling Down the Street"
READ MORE STORIES ABOUT / Future Society
Keep up.
Subscribe to our daily newsletter to keep in touch with the subjects shaping our future.
+Social+Newsletter
TopicsAbout UsContact Us
Copyright ©, Camden Media Inc All Rights Reserved. See our User Agreement, Privacy Policy and Data Use Policy. The material on this site may not be reproduced, distributed, transmitted, cached or otherwise used, except with prior written permission of Futurism. Articles may contain affiliate links which enable us to share in the revenue of any purchases made.
Fonts by Typekit and Monotype.