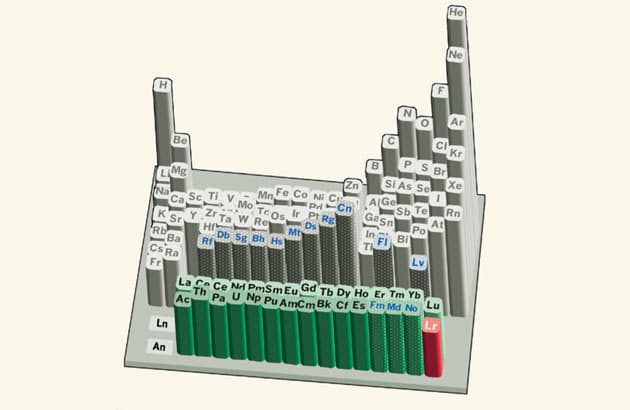 For folks whose last exposure to the periodic table might have been in a college or high school chemistry class, the idea that the order of elements on the periodic table is not an immutable physical reality might come as a shock. But recent experiments at the Japan Atomic Energy Agency (JAEA) have put the location of final member of the actinide series, lawrencium (Lr), in its place of honor in the lower right of most representations, in jeopardy.

Lawrencium is a transuranic element and is not found naturally in nature. It can only be created by the decay of even heavier non-naturally-occurring transuranic elements, or by bombarding lighter elements from the actinide metals with boron ions. The extremely short half-life (from seconds to minutes, depending on the specific isotope created) makes chemical purification and isolation of the element extremely challenging for experimental purposes.

The researchers were able to capture lawrencium atoms and deposit them on a heated metal surface. The heat caused an electron to escape from those atoms, ionizing them, and by analyzing the number of ionized atoms created by passing them through a mass analyzer, the team calculated the energy required for ionization. And that level of energy (4.96 eV) was quite low.

This value matched a prediction made by a team at Tel Aviv University and suggests to some that the element has been socketed into the wrong spot on the periodic table for some time now.

No one is suggesting that the atomic number (103) is incorrect and that the element should somehow be demoted on that basis. Instead, the debate is over the block in which lawrencium sits.

Currently, it is the last element in the “f-block,” the family of elements thought to produce fundamental spectroscopic lines. That characteristic, in turn, is a function of the wave-like behavior of the electron orbiting the atom’s nucleus. And the fact that the lawrencium atoms can so easily lose their outermost electron suggest that they may not be so fundamental after all.

But even scientists who do not believe that lawrencium belongs in the f-block cannot agree whether it should more appropriately be placed in the d-block (the central block of the standard table) or the p-block. The chemical behavior of the element, some say, is more akin to that of scandium and yttrium and that lawrencium should be placed below these (although, in many versions of the table, the entirety of the f-block is already located below those d-block elements). Others believe that the experiment tends to confirm that the electron occupies an orbit which is more common to the p-block elements which are organized to the right of the table.

Of course, despite the elegance of the standard periodic table we use, there is nothing inherent about it. It exists only as a convenient mechanism to organize elements in a way to assist students, chemists, and physicists in relating to their characteristics. Any number of alternative table formulations have been presented over the years, each presenting a slightly different perspective on those relationships, and none of which necessarily place lawrencium in any particularly distinctive position.

Although the debate is in the news right now, the International Union of Pure and Applied Chemistry, which acts as international chemistry’s arbiter of nomenclature and standardization disputes, has no immediate plans to monkey around with its own official representation of the standard periodic table. The news might prove of note to students in some future chemistry classes, but for most chemists and physicists, there is little practical value to shuffling the position at this point. Instead, the results of the JAEA studies will simply provide san additional valuable data point to aid in the understanding of rare transuranic elements.