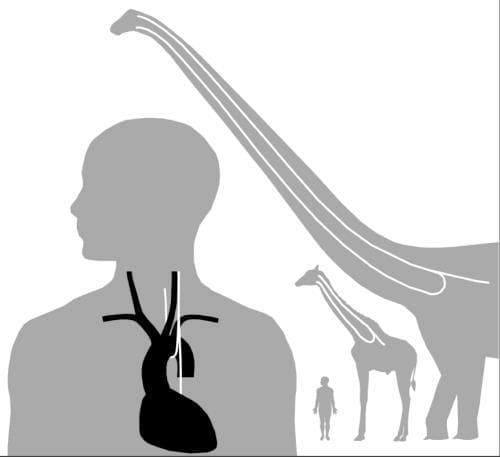 A subject of high importance: the recurrent laryngeal nerve has been one of the best cases for evolution due to the alarmingly obscure detour its route is forced to take. It begins in the brain and its endpoint is the larynx, though it does not go straight from point A to point B, as any decent engineer would have ensured. Instead, the nerve bypasses point A, goes down into the thorax, wraps around the right subclavian artery, then completes its journey back up into the larynx. Pretty long detour, right? Right.

However, in giraffes, this detour turns into a 15-foot (4.6-meter) circuit.

In fish-like ancestors, there would have been no such detour. The nerve would travel directly from the brain, past the heart, and to the gills as it does with most modern-day fish. However, since the neck began elongating and the heart began lowering into the chest, the nerve became caught on the wrong side of the heart. As the nerve stretched, natural selection gradually lengthened it in tiny increments, leaving it in the circuitous route we now see.

As Richard Dawkins put it, "evolution cannot go back to the drawing board. Evolution has no foresight."

To observe the dissection of a giraffe's recurrent laryngeal nerve by Professor Richard Dawkins, check out this link.