Ever Seen a Solar Analemma From Mars? 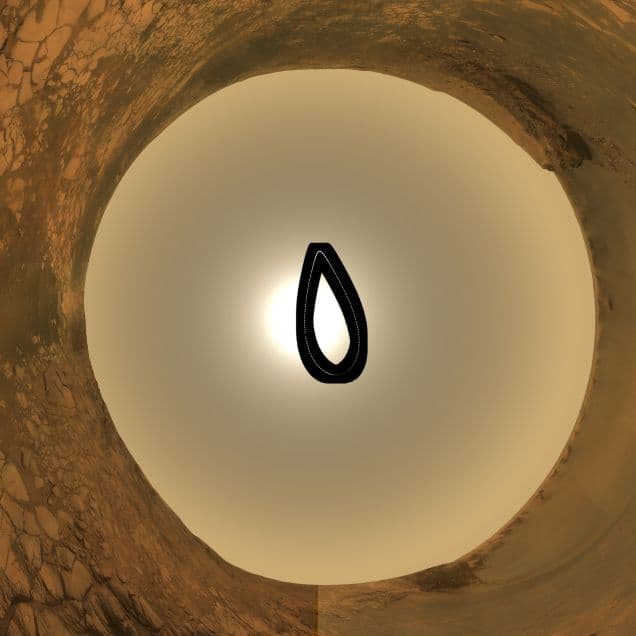 To capture the natural world, photographers employ a wide-variety of techniques that show a diverse range of phenomena that ultimately help us better understand the universe. We see some of these techniques used during solar eclipses, in the heart of far-away nebulae; when scientists capture the faint glow of even more distant exoplanets, all the way down to capturing objects that can be found all the way at the end of the observable universe, but here at home, perhaps the coolest  (but most complicated) way we can see physics in action is by capturing solar analemma.

It, simply put, traces the path the Sun travels in while planets make one complete orbit around the Sun.  Since no two planets have identical orbits, the path the sun takes from the surface of each planet will differ each time, thus the analemma is never the same. Take Earth, for instance. Its path resembles that of a disproportionate  infinity symbol (or a magic eight figure).

The figure itself also changes depending on your vantage point. If you view it from the northern hemisphere, the smaller loop is always fixated north of the larger one; while at the equator. it would be seen horizontally (with the larger loop north of the smaller loop). Moreover; you can only see half the figure at the poles.  If we were able to map the sun's position from any one of the planets in our solar system, they too would be distinct, which brings us to Mars; the only bonafide planet we have instruments probing the surface of. How would a solar analemma look from the Red Planet?

To find out, the Opportunity Rover collected data between July 16, 2006 and June 8, 2008 (the Martian-equivalent of a year). Every 3 days at precisely 11:02 a.m., Opportunity would wake up and capture a fresh image of the Sun hanging in the Red Planet's sky. Once all of the images were taken, NASA could swoop in and stitch individual images together to form a true-life composite of the martian analemma.

As you can see, the analemma of both Earth and Mars not only differ, but differ  drastically, which boils down to the fact that Mars' has a much more elliptical orbit around the Sun than Earth. It's axial tilt is similar, but not identical; thus the discrepancy.

Because we're seeing a fish-eye view of the analemma, we are unable to clearly make out notable objects from the surface of Mars, but we can still faintly see inside of the well-known Victoria crater - a potential landing spot for future manned missions to Mars, and the location the images were taken in.

The black pear-shaped figure is meant to drown out some of the light emitted by the Sun, but the curved end is accurate. The "point" maps the change in the speed at which Mars orbits the sun. The drop is created during Mars' slowest approach and its most distant position, while the faster speed is recorded with the stretched-out, rounded-bottom.

What's more is that astronomers already had a hunch about the shape it would take before the idea of snapping the images came to fruition. The renderings (pictured on the right) even aligned with our observations with amazing accuracy.

Lastly; the collection of Opportunity's images used to produce this composite showcase just how dusty and turbulent the environment is once you touch down on red soil. Dust storms raged on for a good chunk of time in 2007. One of the most prolific was so intense, it put a halt on all simple communication between the rover and Earth-based NASA personnel, which didn't lift for several days. Not only did this throw a wrench in capturing enough images to create a detailed composite, but it also prevented Opportunity from seeing the famous blue sunset experienced on Mars.