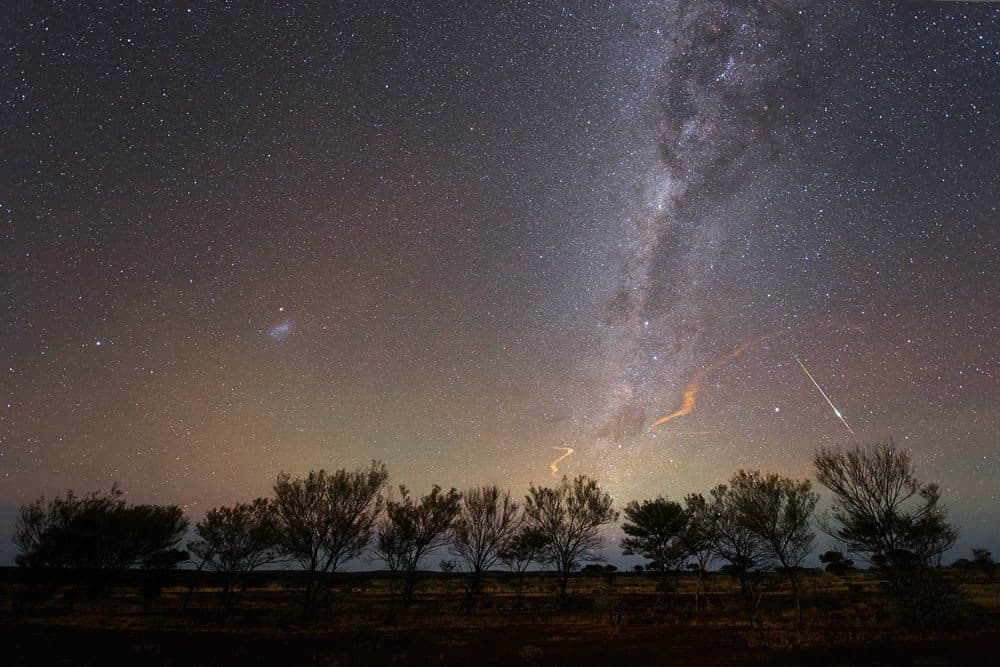 The Eta Aquarids Meteor shower peaks in late April and early May, to date, it is one of the longest lasting meteor shows the cosmos has to offer. This shower is caused when Earth passes through the trail of debris left behind by Halley’s Comet each year. This debris trail is more diffuse than most such comet trails. This means that the Eta Aquarids shower doesn’t have any sharp peaks in meteor activity, but rather inhabitance on Earth are treated to a few week period where there are more shooting stars than others – potentially topping out at about one meteor per minute.

This image, taken by Colin at Colin Legg Photography was taken on May 4 from Australia. The three objects that immediately jumped out at me in this 20-second exposure is the bright Eta Aquarids meteor seen near the left-hand side of the frame, the iconic band of the Milky Way, and the Small Magellanic Cloud.

Originally, the I took the wispy clouds seen on either side of the Milky Way as airplane contrails (most probably). Phil Plait set me right by explaining these objects are not one, but rather two persistent trains. Phil Plait explains, persistent train is “not actually smoke. As a meteoroid (the actual solid chunk of material) blasts through the air, it ionizes the gases, stripping electrons from their parent atoms. As the electrons slowly recombine with the atoms, they emit light -- this is how neon signs glow, as well as giant star-forming nebulae in space. The upper-level winds blowing that high (upwards of 100 km/60 miles) create the twisting, fantastic shapes in the train. The actual details of how this works in meteor trains are not well understood, mainly because they are so difficult to spot and study. It's hard to point a telescope at a position in the sky when you don't know where or when a meteor will pass through!”