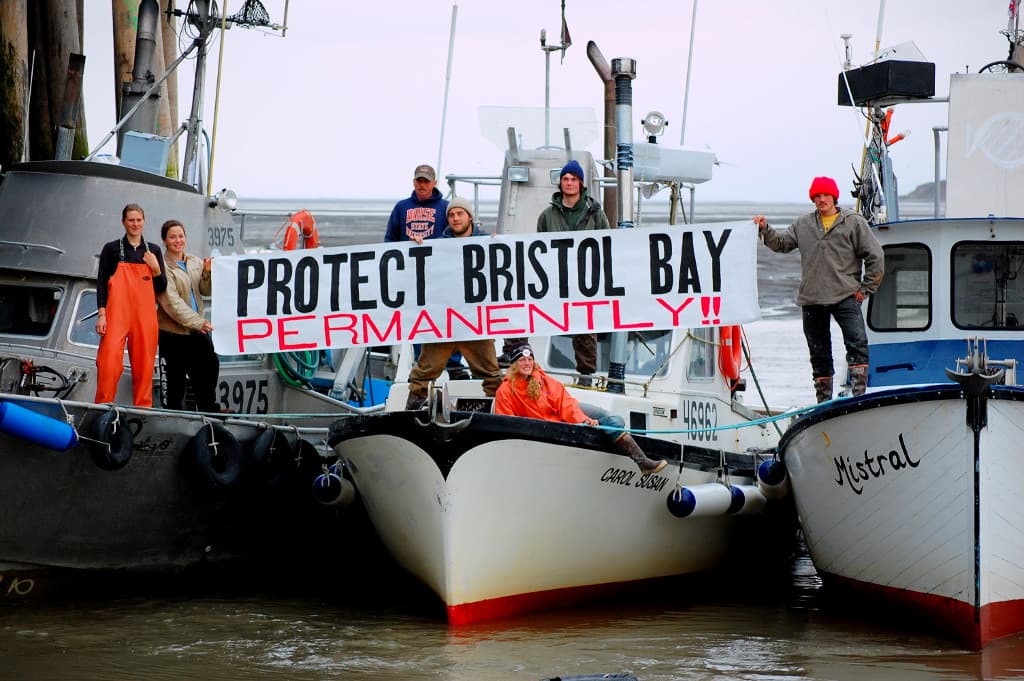 The United States Environmental Protection Agency (EPA) announced on Friday that they’re putting the brakes on the Pebble Mine project in the Bristol Bay region of Southwest Alaska. Development of the mine would threaten the word’s largest sockeye salmon fishery by polluting the rivers and streams that fish use to spawn, potentially causing irreversible harm to the ecosystem and the economy it supports. In 2010, a coalition of nine federally-recognized Alaskan native tribes called for EPA to block the permitting process by using the power granted to it under Section 404(c) of the Clean Water Act (CWA).

In response, EPA undertook a three-year study that explored how routine mining activities and potential containment failures could adversely affect the Bristol Bay environment. Their findings, released in January, convinced EPA to heed the tribes' request and block the U.S. Army Corps of Engineers (USACE) from issuing the mining permit, pending further review.

"Bristol Bay is an extraordinary natural resource, home to some of the most abundant salmon producing rivers in the world. The area provides millions of dollars in jobs and food resources for Alaska Native Villages and commercial fishermen. The science EPA reviewed paints a clear picture: Large-scale copper mining of the Pebble deposit would likely result in significant and irreversible harm to the salmon and the people and industries that rely on them."

EPA must next consult with USACE and the site owners before holding public hearings and reaching a final decision on whether or not they’ll veto the permit. Around 60,000 CWA permits are requested each year, but just 29 have triggered this process in the 40-year history of the Clean Air Act. Only 13 proposals have ultimately been vetoed. To avoid a veto, the corporation with the mining rights, Northern Dynasty Minerals, will argue that its mining efforts won’t disrupt the surrounding ecosystem insofar as is possible with open-pit mining. This hinges on their ability to contain large amounts of waste byproducts behind earthen dams. Such efforts have exceptionally poor environmental track records.

Chemical byproducts, heavy metals, and acid mine drainage have historically polluted freshwater environments and will likely impact wildlife downstream of the Pebble Mine. Over 40% of watersheds in the western U.S. are contaminated in this way, and a hefty majority of mining operations fail to meet the water quality standards that they themselves propose. EPA’s investigation on the impact of the Pebble Mine warns that “at least one or more accidents or failures could occur, potentially resulting in immediate, severe impacts on salmon and detrimental, long-term impacts on salmon habitat.”

Nixing the Pebble Mine is one of the unfortunately rare examples where economic and environmental interests align. Bristol Bay's ecosystem supports a commercial and sport fishing industry that generates nearly $500 million per year and employs over 14,000 people, in addition to being vital for subsistence fishing by native populations. Meanwhile, commercial overfishing is ravaging the world's ocean ecosystems. This problem cannot be overstated. Amidst the crisis, wild-caught Alaskan salmon are a shining example of responsible fishing practices. The fisheries threatened by the Pebble Mine are not just among Earth’s most productive; they are among the most intensively managed and well preserved.

This renewable resource could be maintained for generations to come if current trends continue. So what is the incentive to jeopardize this in the first place? The proposed site of the Pebble Mine sits atop the largest known untapped copper orebody in the world. The geologic formation is called a porphyry copper deposit, which forms as cooling magma mixes with surface or subsurface water. Copper and other metals such as gold, silver, and molybdenum are dissolved in the water (mineralized), which becomes increasingly concentrated as the magma cools. Concentrated veins of economically valuable metals are then left within the igneous rock formation and are generally extracted through open-pit mining.

Northern Dynasty Minerals claims there to be $300 billion worth of recoverable metals at Pebble, but this organization is a consortium of Canadian, British, Australian, and Japanese corporations. Alaska stands to benefit only through tax revenue and the thousand local jobs that the mine will support during its 30-60 year operation, after which there will be nothing left but a massive pit and a small group of wealthier individuals. The estimated $2 billion per year in mining revenue may eclipse the fishing industry in the short term, but little of this will return to the community and the environmental costs of the mine could destroy the nearly half-billion dollar per year fishing industry that otherwise should be sustainable in the long term.

HOW YOU CAN HELP:

It's important to reiterate that EPA has not yet vetoed the project. The process they've begun is sensitive to public opinion, and it began due to public pressure. Voice your support for vetoing the Pebble Mine by writing policymakers and making a charitable donation to Trout Unlimited for Bristol Bay preservation. Offshore oil drilling also threatens the bay, and protections against drilling will end in 2017. Visit the Alaska Marine Conservation Council to learn about that issue.