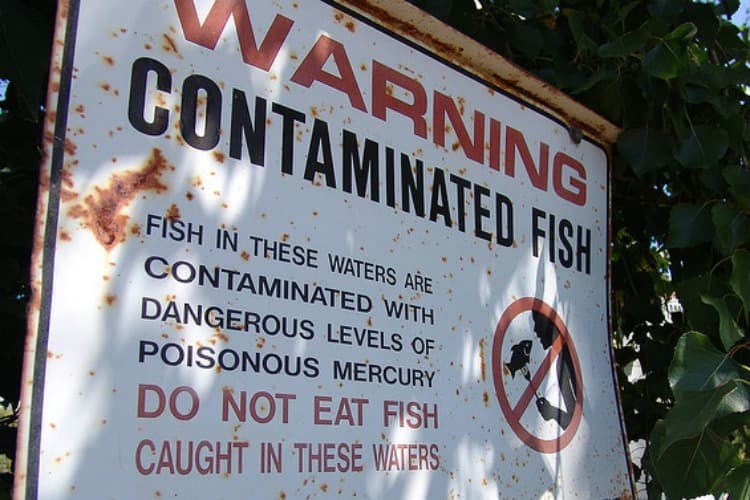 We’re used to hearing about heavy-metal bioaccumulation in aquatic species in a mostly negative light. According to the Environmental Protection Agency (EPA), "bioaccumulation" is "a process by which chemicals are taken up by an organism either directly from exposure to a contaminated medium or by consumption of food containing the chemical." Consequently, fish and other sea creatures absorb our toxic waste as it is dumped into their waters, and they subsequently return the favor right back up the food chain when they, or their apex predators, are caught by humans and eaten. For example, since the last 1970s, Atlantic salmon have been known to contain increasing concentrations of lead, and more recently, salmon in Washington and Alaska have been found carrying around elevated levels of PCBs (polychlorinated bipheyls) and mercury.

Elevated amounts of heavy metal in water leads to all kinds of deleterious effects on fish and other aquatic species, but bioaccumulation takes the damage to a whole new level. The bioaccumulation process concentrates these substances in the fish in far higher levels than they exist, diluted, in the water itself, and may rise to concentrations which are dangerous for human consumption.

Oysters have been a key species in this process, largely due to their role as filter feeders, constantly drawing water in and filtering it through cilia which extract biomass for digestion and process in the creature’s stomach. Oysters filter more than a gallon of water an hour, and if that water has metals or biomass with metal absorbed in it, it is going to end up in the oyster.

But not all bioaccumulators are created equal, and oysters do not, for example, show particularly high uptake of lead or chromium, as demonstrated in this study of Gulf of Mexico Eastern oysters. They are, however, particularly susceptible to absorption of cadmium, due to the easy substitution of that element for the naturally occurring calcium that comprises the shell. They also tend to pick up higher amounts of copper and zinc — two of the most common heavy metals found in storm water runoff, thanks to their prevalence in various automotive components.

This is bad news for other species that feast on oysters, including crabs and sea birds, and, of course, humans.

But it turns out that the oyster’s proclivity for absorbing these heavy metals — in particular, the inclination of shell material to directly adsorb single-constituent metal ion solutions — can be used to help protect the environment as well.

In Washington state, the Port of Seattle first began using crushed oyster shells — an abundant resource, given the oyster-rich waters of nearby Puget Sound — in 2005 as an additive to storm water bioretention swales at SeaTac airport. The goal was to add hardness to the runoff to reduce toxicity before the water ended up, inevitably, in Puget Sound once again. Calcium from the shells served to increase the mineral levels, but Port environmental managers also found that the runoff from outflows so treated also had copper and zinc levels reduced by about 50%.

The method worked so well, and was so simple compared to alternate storm water treatment techniques, that the Port adapted it to other properties as well. Now, oyster shells are added to many different drainage systems at Port facilities, and once per year empties the used shells from catch basins (to be disposed of as solid waste) and replenishes the system with fresh shells.

Other bioretention techniques have been in use for capturing heavy metals from runoff for years, but many of them rely on using living plant systems to adsorb the metals. In areas where they are seasonally inactive, this leads to lower efficiency in metal adsorption, and it also requires additional and ongoing tending of the plant system. Oyster shells are equally effective in all seasons (although water temperature and other factors can affect their adsorption rates, similar to plants) and require only annual exchange rather than year-round attention. They also are physically robust, heavy enough to resist strong water flow, and do not require delicate handling to remove or install in storm water treatment systems.

Other organic materials are being investigated for similar filtering uses including wood chips and ash, but for robust exterior storm water treatment, oyster shells appear hard to beat.