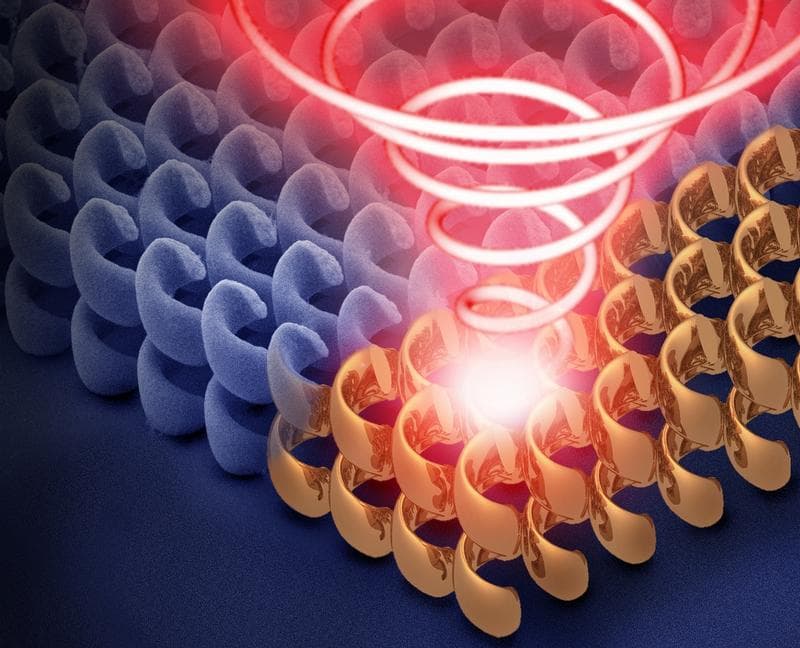 Since the beginning of recorded time, humans have used materials found in nature to improve their lot. Since the turn of this century, scientists have studied metamaterials, artificial materials engineered to bend electromagnetic, acoustic and other types of waves in ways not possible in nature.

Now, Hao Xin, a professor of electrical and computer engineering at the University of Arizona, has made a discovery with these synthetic materials that may take engineers one step closer to building microscopes with superlenses that see molecular-level details, or shields that conceal military airplanes and even people. Light rays could, in theory, be bent around an object inside the cloak, making it seem invisible.

In the UA's Millimeter Wave Circuits and Antennas Laboratory, Xin uses a 3-D printer to make metamaterials from metals, plastics and other substances. Resembling porous plastic bowling balls and tiny copper wire circuit boards, these objects are configured in precise geometrical patterns to bend waves of energy in unnatural ways. In particular, they exhibit a property called negative refraction, meaning they can bend a wave backward.

Through a prism with negative refraction, a straw leaning in a glass of water would appear inverted: The piece above the water's surface would appear below the water and leaning in the opposition direction.

In a more futuristic scenario, someone looking at a person wearing a cloak with artificially designed refraction properties would see part or none of the person, depending on the cloak's refractive index distribution and whether the light bouncing off of it reached the viewer's eye.

Xin studies how metamaterials affect microwaves. But whether studying microwaves, light waves, sound waves or seismic waves, metamaterials with negative refraction have presented a vexing physics problem for engineers: They reduce the strength of the wave.

"One of the biggest problems with metamaterials is that they produce energy loss," Xin said. "The waves decay as they pass through the artificial material. We have designed a metamaterial that retains negative refraction but does not diminish energy."

In fact, the synthetic material not only prevented energy loss—it actually caused energy gain, with the microwave intensifying in strength as it passed through the material. Xin achieved this by embedding simple battery-powered tunnel diodes (a type of semiconductor device) and micronanofabrication technologies into the new material.

"Many people did not think it was possible to achieve energy gain along with negative refraction," Xin said.

He first showed it was possible, with one-dimensional metamaterials, in a paper published in Physical Review Letters in 2011. His new findings reported in Nature Communications have broader implications, because they involve 3-D metamaterials.

The research is funded by the Air Force Office of Scientific Research, or AFOSR. Xin presented his findings in November 2014 at Duke University to scientists with the Tri-Service Metamaterials Program, which promotes collaboration among government, industry and academia to advance metamaterials research and development for the Department of Defense.

"I always wanted to work on metamaterials, due to their interesting physical properties such as negative refractive index," said UA doctoral student Adnan Kantemur. "I also wanted to be able to fabricate these structures. Most of the research groups I know only study them analytically. In our group, not only are we solving analytic problems, we also have the opportunity to make the metamaterials ourselves."

While Xin works with microwave frequencies, his findings have implications for optical, acoustic and other types of radiation. Metamaterials with both negative refraction and energy gain properties will help engineers tackle problems of lens diffraction that prevent even the most sophisticated microscopes from probing some extremely tiny materials, including many individual proteins and viruses.

Beyond such superlenses for biomedical and other uses, metamaterials are being studied to produce higher-performance microwave circuits, more energy-efficient and earthquake-resistant buildings, more powerful solar power converters, improved sensor technologies, and ever-smaller antennas that will make wireless devices used for everything from health monitoring to military surveillance more flexible, efficient and practical.

Metamaterials remain in the testing phase. Xin said it will be years before potential fantastical applications like invisibility cloaks actually appear on the market.

But his research is inherently practical, he said, predicting: "Invisibility cloaks will be a reality in my lifetime."

(From the University of Arizona)