"There is no shortage of the element itself, as lithium is almost everywhere on Earth." 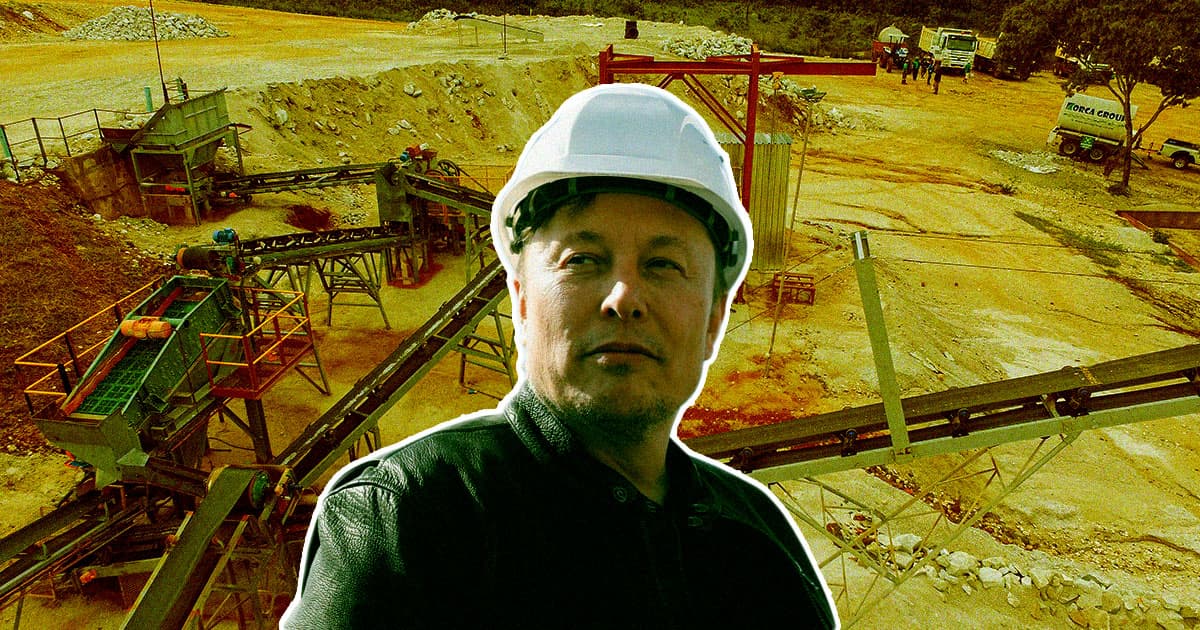 The electrification of automobiles comes with some well established benefits, from reducing our carbon footprint to ending reliance on fossil fuels.

But there's a major obstacle that EV makers are battling with right now: the availability of rare elements that are necessary for the construction of battery packs.

Mining lithium, in particular, has proven to be extremely difficult, with a steep environmental toll and considerable humanitarian cost in parts of the world.

And that's why we're in the middle of a lithium crisis right now — among other reasons like the soaring demand for electric cars — with global prices of lithium skyrocketing more than 450 percent over the last 12 months.

Now, it sounds like the situation could lead Tesla to forge into a new industry: mining.

"Price of lithium has gone to insane levels!" Tesla CEO Elon Musk tweeted on Friday. "Tesla might actually have to get into the mining and refining directly at scale, unless costs improve."

"There is no shortage of the element itself, as lithium is almost everywhere on Earth," he argued, "but pace of extraction/refinement is slow."

It's a surprising suggestion, considering the sheer amount of resources it would take for Tesla to start its own mineral extraction business.

Besides, other companies are increasingly looking for ways to end our reliance on the difficult to extract element.

There's zinc, for instance, which some researchers believe could provide a worthwhile alternative. Others argue that salt or sodium-ion batteries could also be promising.

But a viable alternative that could be produced at scale — and that can also rival the considerable energy density of lithium-ion batteries — has yet to be found.

In other words, Tesla will likely have to rely on lithium for the near future, despite the rising costs. That means we may see Tesla and other EV makers raising their prices, undermining ongoing efforts to advocate for the widespread adoption of EVs.

In fact, Tesla already had to increase prices across its lineup last month, with the cheapest Model 3 now going for over $46,000.

"Tesla and SpaceX are seeing significant recent inflation pressure in raw materials and logistics," Musk tweeted at the time.

It's a difficult period for electric vehicle manufacturers. Compounding inflation woes are an ongoing global microchip shortage and political uncertainty resulting from Russia's invasion of Ukraine, driving up commodity prices.

The need for a feasible alternative to lithium-ion batteries has never been more clear — and companies around the world are desperately looking for other ways to meet a surging demand.

But whether Tesla will be able to turn things around by establishing its own lithium mines remains to be seen.

Read This Next
Fusion Futility
Elon Musk Slams Fusion, Says Future of Energy Is Wind and Solar
Remember Donald?
Donald Trump Goes on Bizarre Rant Against Electric Cars
The Kids Won't Be Alright
Elon Musk Warns That Humankind Will "End Up in Adult Diapers"
Stop Aging Please
Elon Musk Says That Immortality Tech Would Be Very Dangerous
World is on Fire
UN Calls Elon Musk's Bluff, Providing Detailed Plan to Prevent World Hunger
More on Earth & Energy
Imagine Dragons
Yesterday on the byte
Miners Say "Sorry" for Losing Highly Radioactive Object Along Highway
Rock Battery
Jan 28 on the byte
Researchers Successfully Turn Abandoned Oil Well Into Giant Geothermal Battery
Do The Worm
Jan 27 on the byte
Scientists Name "Funky Worm" Amphibian After a Weird 70s Funk Song
READ MORE STORIES ABOUT / Earth & Energy
Keep up.
Subscribe to our daily newsletter to keep in touch with the subjects shaping our future.
+Social+Newsletter
TopicsAbout UsContact Us
Copyright ©, Camden Media Inc All Rights Reserved. See our User Agreement, Privacy Policy and Data Use Policy. The material on this site may not be reproduced, distributed, transmitted, cached or otherwise used, except with prior written permission of Futurism. Articles may contain affiliate links which enable us to share in the revenue of any purchases made.
Fonts by Typekit and Monotype.