Could Elon Musk Paint a Giant Picture of His Face on the Moon?

Is it legal? Probably. Would people get pissed? Most definitely. 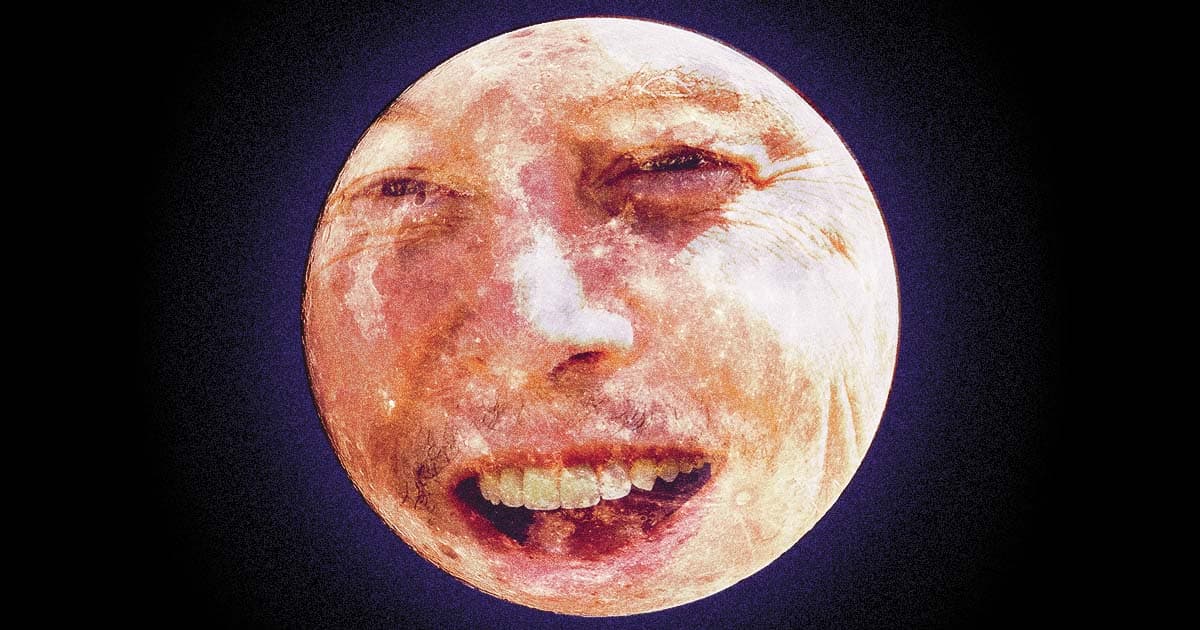 In a post today, a redditor posed an provocative question: could you paint your face on the Moon, so that it was visible from Earth, and get away with it?

"Let’s say that Elon musk Does [go] to the moon and paints his face on it," read the post, before it was deleted by the trigger-happy mods of r/space. "The space treaty says no one owns the moon or can claim it, so could someone get away with doing something like this."

The question of whether or not Musk would do something like that is probably pretty obvious. Of course he would. Imagine the meme potential. It’d be wild, and another thing he could lord over Jeff Bezos.

Whether the billionaire SpaceX founder could do it, though, is another question entirely. There are three barriers that need to be examined:

First, you need to consider the technical aspects. Is it even possible to paint something large enough on the Moon that we could see it from Earth? There’s no reason to even consider the other two barriers if you’re doomed to fail.

Short answer: Probably — though if Musk wants to plaster his mug on the entirety of the Moon’s surface visible during a full moon, he’s going to need an ungodly amount of paint. That might be prohibitively expensive enough, so let’s assume he decided to save money and resources with a clever hack.

Jim Garvin, chief scientist at NASA’s Goddard Space Flight Center, spoke to The New York Times in 2008 about a similar proposal that purportedly planned to project beer ads onto the lunar surface. He said that scientists had indeed bounced lasers off the Moon before, lighting up areas about the size of tennis courts.

Scaling up, though, would pose a challenge.

"In order for an advertisement to be seen by people on earth," Garvin told the NYT, "the laser light would need to cover an area about half the land size of Africa."

Of course, Musk would need a dizzyingly large array of laser systems to light up the Moon’s surface from the Earth — but it would likely be possible, albeit expensive.

But what about the law? Luckily for the Tesla CEO, he might be okay to deface the Moon with his, well, face.

For one, no country "owns" the Moon. That means no one specific governing body can enforce laws on it.

That said, it doesn’t mean that you’re allowed to commit any crime you want on the lunar surface. On the Moon, the principle of "extraterritorial jurisdiction" would apply to Musk. That means that the laws of a person’s home country apply to them if they’re in a territory not owned by a country.

But he might not be committing any crimes if he decides to project — or even paint — his face onto its surface, since no one owns the Moon. So he’s probably in the clear legally.

Then that leaves the ethical: is it right to plaster your face all over a celestial body that has been a source of joy and wonder to billions of people over the lifetime of our species?

This one is an unequivocal "no." Not at all. What a silly question. One would be hard pressed to even come up with an argument otherwise. It’s the Moon, after all! It’s not there for one person to enjoy and use for themselves. It’s for everyone.

So, could Musk paint a giant picture of his face on the Moon? Yes. Will he do it? Probably not — though we would never put an opportunity to promote himself (and memeify the solar system) past him.

Read This Next
Moon Wrestling
The Head of NASA Is Scared Chinese Astronauts Will Seize Portions of the Moon
Shot Well
Head of NASA Relieved to Hear Elon Musk Isn't REALLY Running SpaceX
Overview Effect
William Shatner Says His Space Trip Left Him With a Feeling of Terrible Grief
Makeover Scene
Space Tourist Says He's Thinking About Flying SpaceX Craft Up to Fix Hubble
Grain of Salt
There's a Huge Problem With Elon Musk's Promise to Bring Starlink to Iran
More on Off World
Drama Bomb
Wednesday on the byte
European Space Agency Halts Plans to Send Astronauts to Chinese Space Station
Futurism
Wednesday on the byte
Asteroid Mining Startup About to Launch First Mission
Carry On, Wayward...
Wednesday on the byte
NASA Says Lucy Spacecraft Will Forge Ahead With Busted Solar Array
READ MORE STORIES ABOUT / Off World
Keep up.
Subscribe to our daily newsletter to keep in touch with the subjects shaping our future.
+Social+Newsletter
TopicsAbout UsContact Us
Copyright ©, Camden Media Inc All Rights Reserved. See our User Agreement, Privacy Policy and Data Use Policy. The material on this site may not be reproduced, distributed, transmitted, cached or otherwise used, except with prior written permission of Futurism. Articles may contain affiliate links which enable us to share in the revenue of any purchases made.
Fonts by Typekit and Monotype.