Elon Musk Now Denies That His Family's Emerald Mine Existed, In Spite of Previously Bragging About It

He's not beating the allegations, folks. 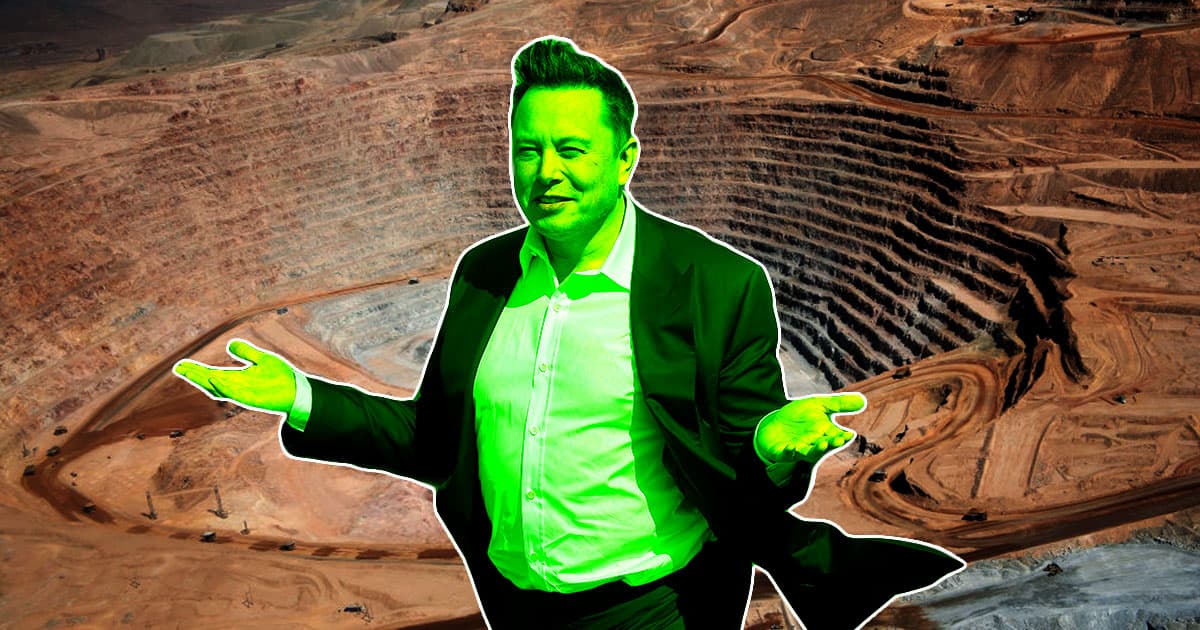 Elon Musk is denying claims that his family owned an emerald mine, even though he was bragging about it less than a decade ago.

"The fake emerald mine thing is so annoying (sigh)," Musk tweeted over the weekend. "Like where exactly is this thing anyway!?"

As many pointed out, the mine was in Zambia — at least, according to Musk himself back in 2014.

"Musk and his family seem particularly sensitive about shaping the narrative about their history lately, especially around the emerald mine," tech critic Paris Marx tweeted in response. "They act like they’ve never heard of it before, even though he bragged to Forbes about it in 2014."

Included in the post is a screenshot a 2014 Forbes interview conducted by freelancer Jim Clash in which Musk, then more broadly considered a wunderkind, shared an off-handed anecdote about his now-estranged father Errol Musk's alleged mine.

"This is going to sound slightly crazy," the multi-hyphenate billionaire is quoted as saying, "but my father also had a share in an Emerald mine in Zambia."

Curiously, the interview in question is no longer live on Forbes' website, though it is backed up by the Internet Archive. There's no note explaining why it was taken down, and the original link leads to a 404 error page — though Futurism has reached out to Forbes, the freelancer, and Musk himself for further details.

The open question surrounding the alleged existence of the elder Musk's Zambian emerald mine is made all the murkier by the way it's spun out of control online, with dubious takes claiming the mine existed in the neighboring country of South Africa (where the Musks are from) or that the money gained from those "blood" gems acted as seed capital for the younger Musk's many business ventures, or at least paid off his student loan debt.

As the conspiracy-debunking site Snopes reported back in November, many of those claims don't hold up. But reporting over the years does seem to corroborate that the mine existed, contrary to Musk's latest claims.

Among those many mine mentions is the infamous anecdote from another Insider piece in 2018 about Elon and his brother Kimbal pocketing some of their father's emeralds before walking around New York City with the gems in their pockets, where they sold them to Tiffany & Co. for a couple thousand dollars.

The Forbes writer, Clash, told us he was unsure why the magazine had taken the interview down.

"I did interview Elon, he said what he said, and I don’t know why they’d take it down," Clash told us in an interview.

Like everything about this story, that just serves to further complicate the whole debacle, though if we were to wager a guess as to why Musk now claims his family never owned any mines, it would be similar to Marx's: that he thought it was cool to brag about it back in 2014, but it's significantly less politically expedient to do so now.

As with other outlandish Muskian claims, there is, of course, another possibility: that he (or his father) completely or partially made it up for clout, and Elon is now backtracking because the concept of a white South African co-owning an emerald mine has the stench of apartheid regardless of the specifics.

Read This Next
I Silence Thee
Leaked Messages Seem to Show Elon Musk Using Twitter to Punish His Enemies
Bot Rush
An Overwhelming Number of Porn Bot Accounts "Drowned Out" Chinese Protest Content on Twitter
Hardcore Mode
Even Twitter's Intern Just Resigned in Disappointment
This is Exhausting
Elon Musk Seems to Be Trying to Weasel Out of Vote to Resign
Backtrack, Backtrack
It Turns Out Elon Musk’s Stalking Incident Had Nothing to Do With ElonJet
More on Future Society
Bird Crap
Feb 4 on the byte
It Looks Like Elon Musk Is Actually Building a Twitter Payment Platform
Balloon News
Feb 3 on futurism
China Says "Spy Balloon" Soaring Over America Is Completely Innocent
Down in Flames
Feb 1 on the byte
Elon Musk Apparently Thinks Twitter Is a "Flaming Dumpster Rolling Down the Street"
READ MORE STORIES ABOUT / Future Society
Keep up.
Subscribe to our daily newsletter to keep in touch with the subjects shaping our future.
+Social+Newsletter
TopicsAbout UsContact Us
Copyright ©, Camden Media Inc All Rights Reserved. See our User Agreement, Privacy Policy and Data Use Policy. The material on this site may not be reproduced, distributed, transmitted, cached or otherwise used, except with prior written permission of Futurism. Articles may contain affiliate links which enable us to share in the revenue of any purchases made.
Fonts by Typekit and Monotype.