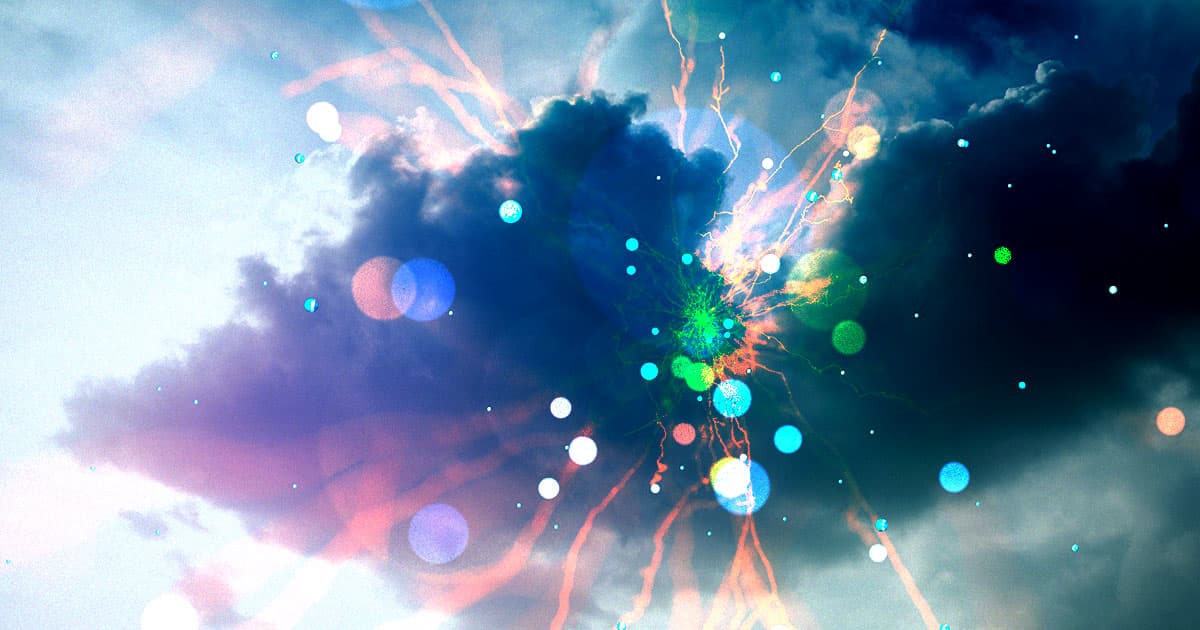 Scientists may be one step closer to controlling the weather — this time by studying the electricity inside of raindrops.

In a new study funded by the United Arab Emirates and published in the journal Proceedings on the Royal Society A, a team of researchers from the University of Reading in the UK found that it's possible to encourage the formation of raindrops by supercharging clouds with electricity.

Clouds are full of water vapor, but rain only occurs when this vapor condenses into heavier droplets. To form into droplets heavy enough to create rain, the droplets require a sufficient opposite charge to bond to each other, positive to negative, and vice versa.

This new Reading research, however, suggests that isn't always a prerequisite for rain droplets to form. If a charge is greater in one droplet — even if they have the same charge — they'll still bond to each other.

The charges will then "migrate" from one to another, the paper claims, "which leads to an attractive force which can dominate if the drops are close to each other."

The amount of charge in a given water drop, the paper continues, can also change when it acquires ions from a nearby electric field.

While applying electric fields to clouds would only make rain droplets five percent more likely to stick together, according to the team, the effect could still be great enough to stimulate or suppress rain.

As The Guardian notes in its write-up of the study, the United Arab Emirates have funded the team of scientists' research since at least 2017 because the wealthy desert confederation happens to be an extremely dry place.

Last year, Harrison, Ambaum, and their colleagues piloted "rain drones" near Dubai to see if they could "cajole" rain out of the skies by releasing positive or negative ions into the clouds. While the technology takes its foundations from the type of "cloud seeding" experiments that date back to the 1950s, the addition of electricity, the team hopes, will boost the otherwise mixed results of previous experiments.

The same group of researchers have also suggested that 33-foot-tall rain towers may provide a more permanent way to electrify clouds.

China, meanwhile, has undertaken its own massive cloud-seeding endeavors to try to control the weather as it hosts the 2022 Winter Olympics in Beijing.

The concept of electrocuting clouds to make it rain may seem far fetched, but given the very real concerns over droughts and water shortages, it doesn't seem quite as outlandish as it once might have.

READ MORE: Have we finally found the recipe for making rain? [The Guardian]

Read This Next
Sundowned
Mexico Bans Startup From Future Solar Geoengineering Experiments
Knew It All Along
Exxon Scientists Knew About Global Warming for Decades While Company Denied It
Solar Slay
Solar Powered Machine Turns CO2 and Waste Plastic Into Valuable Fuel
Dim Sun for Breakfast
Startup Says It's Started Releasing Chemical Into Atmosphere to Dim Sun
Hidden City
NYC's Greenery Eats Up All the CO2 From Its Cars, Trucks and Buses "And Then Some"
More on Earth & Energy
Dishonorable Disc...
Yesterday on the byte
Scientists Alarmed by Video of Deep Sea Mining Company Spewing Waste Into Ocean
Save Yourselves
Feb 5 on the byte
Furious Marsupial So Thirsty For Sex That It’s Dying, Scientists Warn
Stem Ware
Feb 3 on the byte
Scientists Discover World's Oldest Preserved Vertebrate Brain
READ MORE STORIES ABOUT / Earth & Energy
Keep up.
Subscribe to our daily newsletter to keep in touch with the subjects shaping our future.
+Social+Newsletter
TopicsAbout UsContact Us
Copyright ©, Camden Media Inc All Rights Reserved. See our User Agreement, Privacy Policy and Data Use Policy. The material on this site may not be reproduced, distributed, transmitted, cached or otherwise used, except with prior written permission of Futurism. Articles may contain affiliate links which enable us to share in the revenue of any purchases made.
Fonts by Typekit and Monotype.