Echoes of Light Dancing Within the Universe 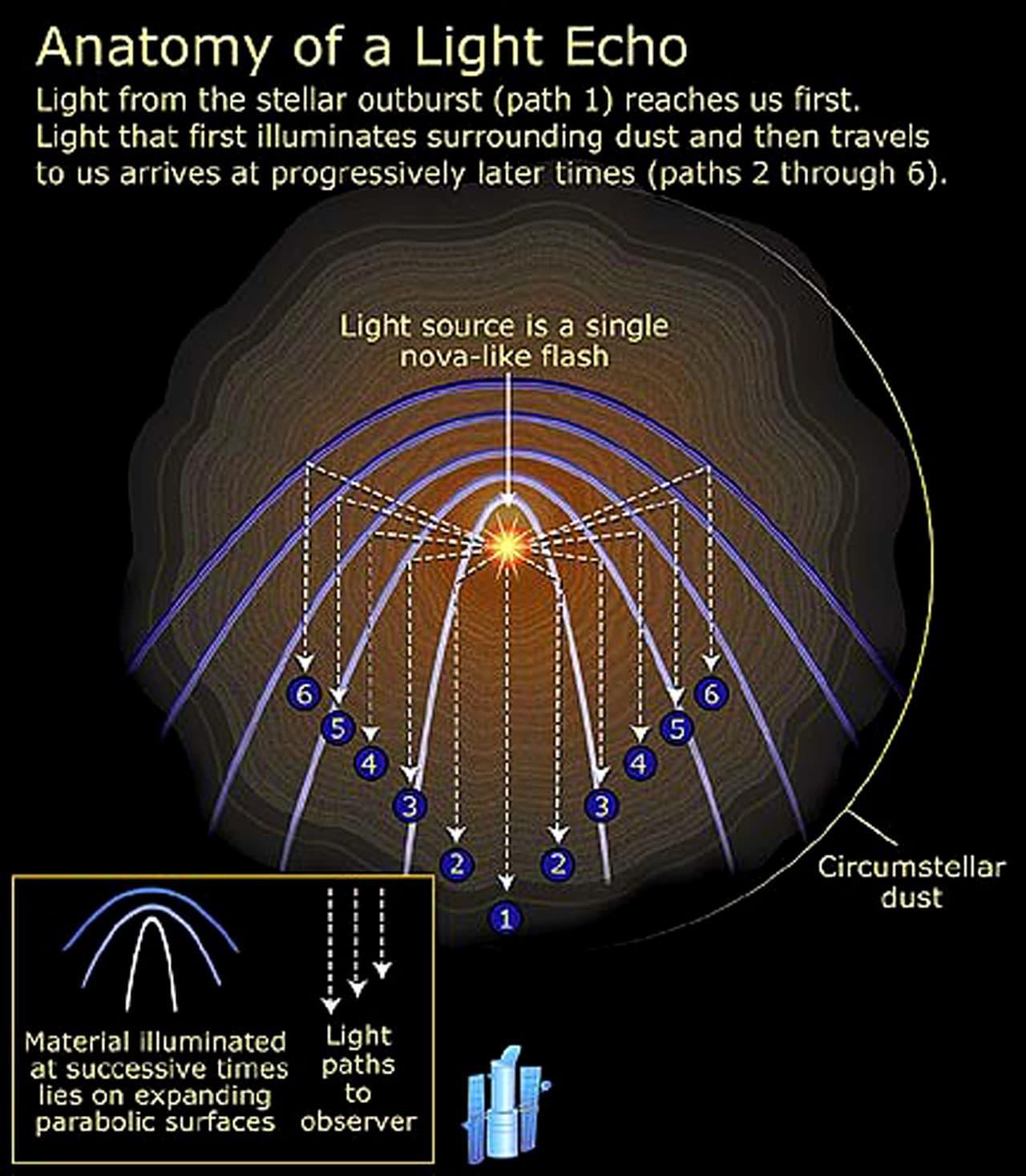 The cosmos has the ability to create majestic formations that look more like an artistic expression than science. Case in point, V838 Monocerotis Light Echo. Though it is just one of the echoed images telescopes have captured throughout the years, in my opinion, it is among the most beautiful and renowned ever to be studied. V838 Monocerotis, or Mon for short, is located near the edge of our galaxy, about 20,000 light years away in the direction of Monoceros. The image was captured using the Hubble Telescope. It is unique because its whimsical characteristics are formed by an echo, rather than an object that continually shines.

CREATING A DAZZLING IMPRESSION OF LIGHT:

Anything that produces a flash in space may also have the potential to create an echo. The best suitors are when a star goes supernova, as it is "like a flash bulb going off in space- it illuminates everything around it” (HubbleSite). This is because supernova explosions are some of the most violent spectacles to occur in the cosmos. Interestingly enough, Mon was not produced by a supernova, rather it was made by a red supergiant.

"The phenomena is similar to that of a nova. A typical nova is a normal star that dumps hydrogen onto a compact white-dwarf companion star. The hydrogen piles up until it spontaneously explodes by nuclear fusion -- like a titanic hydrogen bomb -- exposing a searing stellar core with a temperature of hundreds of thousands of degrees Fahrenheit. By contrast, V838 Monocerotis did not expel its outer layers. Instead, it grew enormously in size. Its surface temperature dropped to temperatures that were not much hotter than a light bulb. This behavior of ballooning to an immense size, but not losing its outer layers, is very unusual and completely unlike an ordinary nova explosion."

The truth is, astronomers do not know for sure what caused the echo's birth; some believe it may have been the unification of a binary star system. Nonetheless, our lack of complete understanding of its origins does not detract from its ethereal beauty.

THE ANATOMY OF A LIGHT ECHO:

An echo in space works essentially the same as one does on Earth. Let's say you're standing in a cavern and let out a yelp, you'll perceive the vibrations of sound, in the form of compression waves, as they bounce off the surrounding walls and back into your ear.

It's only after the sound is created that you'll hear an echo, and depending on the surrounding materials, you may hear it reverberate many times after the initial yell.

The laws of physics are the same universally; but obviously there are no walls in space for light to bounce off of, instead it is echoed off of gas and dust that reside light-years away.

Traveling at 186,000 miles per second - fast enough to circumnavigate the equator of Earth about seven-and-a-half  times every second (NASA) -, the initial blast sent light scattering in all directions, where it met a plethora of starformation material. After the lightwaves collided with stellar gas and dust; the energy was then absorbed and re-emitted back out into space. Some of which, was sent barreling into the direction of Earth. In the same way that a sound echo is delayed, a light echo takes more time to reach our eyes than the first flash does.

THE EVOLUTION OF LIGHT:

The result of this delay is illustrated in Mon's timeline. The initial flash of light is represented by line 1 in the diagram above. On the most direct path toward us, it took four months blazing through space, before hitting our detector for the first time. Now, assign each of the numbered lines of the anatomy diagram to proceeding dates in the timeline below. Line two corresponds to the image taken on September 2, 2002. Line three, to the one from October 28th, and so on. All of the consecutive lines, two through six, correspond to the echo produced by the original flash. Use this guideline to get a feel of how the echo works. By the time it took the light - represented by line six - to collide with material left over from the red giant's demise, and then reflect it back in the direction of Earth, more than two entire Earth-years had gone by.

The echo is continually evolving. In 2004 -when the final image was captured - it was six light years in diameter!  Just imagine how the echo has expanded over the last 10 years! (or at least since 2006)

Remember that flashes of light create echoes. The flash illuminates clouds that normally are not visible to us because they don’t produce light of their own. Therefore, the dust and gas clouds we see in Mon are like illusive ghosts haunting the universe. They would normally be invisible if not for a nearby star's destruction.

In this zoomed in image of the cloud caught in the echo, you can actually see the central star of V838 as it shines brighter and is redder than all the rest of its neighbors. At the time (in 2002), the blast of light that created this echo was the brightest celestial object in the entire Milky Way, 600,000 times brighter than the luminosity of our Sun, to be precise.

It lasted for several weeks, and as quickly as it flashed, it was gone again. To describe poetically the connection between light and our universe, it is best to use the words of the late, great Carl Sagan, "The cosmos is full beyond measure of elegant truths, of exquisite interrelationships, of the awesome machinery of nature."

If you are a science enthusiast, which I am guessing you are, you'd love an opportunity to take a virtual tour through Mon’s’ light echo, and lucky for us all, you can do so here!