It's a compelling theory. 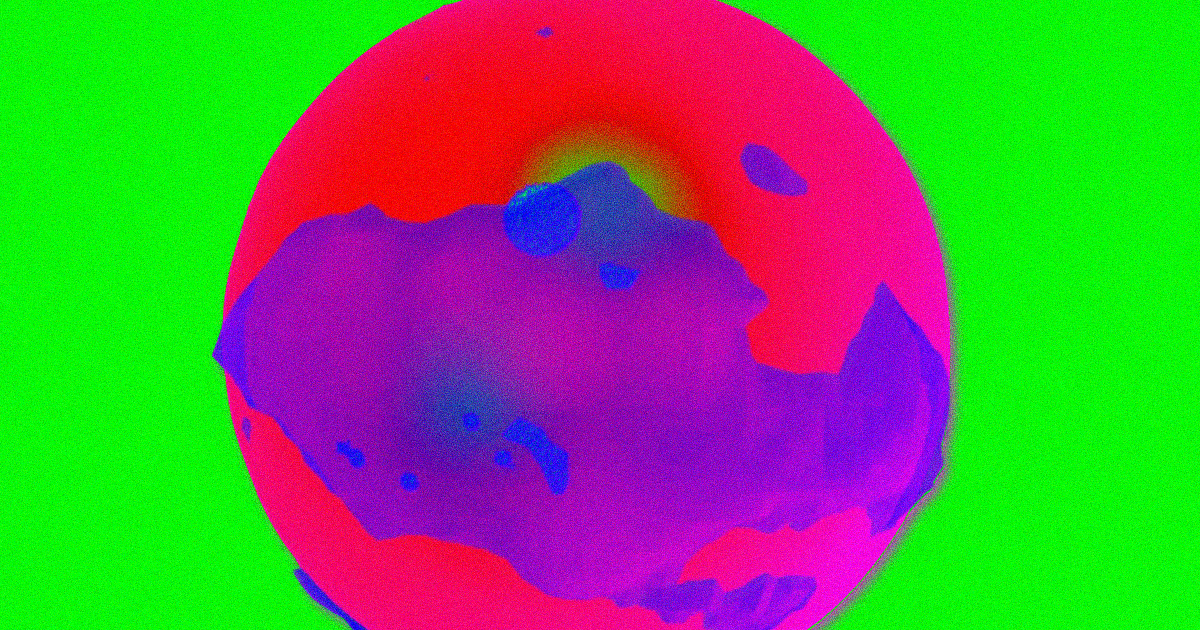 Scientists have long observed a growing "dent" in the Earth's magnetic field just above the southern Atlantic Ocean.

The "South Atlantic Anomaly," as it has become known, can wreak havoc with satellites and spacecraft that happen to pass over it.

Now, scientists suspect it may have a connection to two mysterious blobs of dense material discovered in the Earth's mantle that recent research suggests could be the partial remains of Theia, an ancient Mars-sized protoplanet believed to have smashed into the Earth around 4.5 billion years ago, as Business Insider reports.

Last month, a team of scientists led by Qian Yuan, a graduate student from Arizona State University, presented the idea that the two underground blobs, each millions of times larger than Mount Everest, could have been shards left over from the collision.

Yuan and his colleagues found seismological evidence that the blobs, formally known as "large low-shear velocity provinces" (LLSVPs), were quite different from the rock in the rest of the Earth's mantle.

The blobs may also have a connection to the South Atlantic Anomaly, as our planet's magnetic field is generated by the swirling iron in Earth's outer core, wherein hotter material rises into the partially solid mantle above and is replaced by sinking, denser material, a process known as convection.

Scientists believe the strange dip in the field is caused by something huge interrupting this process under the Atlantic Ocean.

As it turns out, the relatively hot and dense qualities of the two LLSVPs could technically be significant enough to affect these convection currents, Yuan proposed.

One of these blobs also happens to be near southern Africa, not too far from the South Atlantic Anomaly.

But it's not a perfect fit, problematizing the theory.

"Why doesn't the same weakness occur in the magnetic field above the Pacific, where the other province is?" Technical University of Denmark geophysicist Christopher Finlay told BI.

It's a compelling theory, which could shed light on the mysteries surrounding the magnetic field surrounding our planet that protects us from the Sun's harmful radiation.

But until Yuan's claims can be evaluated, we will have to take it for what it is: a theory.

READ MORE: Remnants of an ancient planet buried inside the Earth may be the cause of a weak spot in the magnetic field [Business Insider]

Read This Next
Futurism
This Week in Science: Sept 15-21
Futurism
New Theory Suggests Magnesium Could Help Us Understand Earth's Magnetic Field
More on Sci-Fi Visions
What is Happening
Feb 1 on the byte
Elon Musk Sets His Twitter Account to Private
From the Dept. of...
Jan 30 on futurism
The Best Humidifiers of 2023
Human v. Giraffe
Jan 24 on the byte
Chaotic Italian Fashion Line Baffles Facial Recognition Software
READ MORE STORIES ABOUT / Sci-Fi Visions
Keep up.
Subscribe to our daily newsletter to keep in touch with the subjects shaping our future.
+Social+Newsletter
TopicsAbout UsContact Us
Copyright ©, Camden Media Inc All Rights Reserved. See our User Agreement, Privacy Policy and Data Use Policy. The material on this site may not be reproduced, distributed, transmitted, cached or otherwise used, except with prior written permission of Futurism. Articles may contain affiliate links which enable us to share in the revenue of any purchases made.
Fonts by Typekit and Monotype.