Dropping a Hammer and Feather on the Moon (video post) 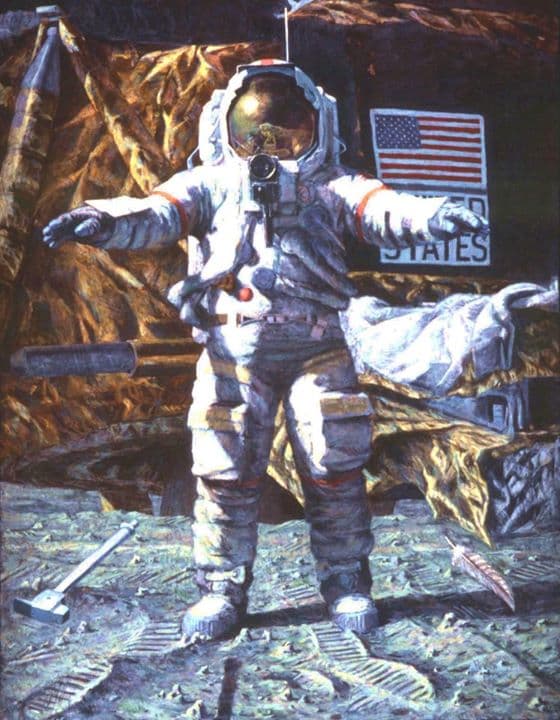 Have you ever seen a feather and a hammer dropped from the same height at the same time and land together? It is rather hard to accomplish this feat on Earth, as the air usually causes the two to land at different times. But the same isn't true on the Moon. In the image pictured here, artist  Alan Bean depicts David Scott preforming the hammer and feather experiment on the Moon during the Apollo 15 mission.  And seeing this happen in a 40-second video clip  is probably one of the coolest things I’ve seen in a long time.

Even though the feather and the hammer have different weights, in this video, you will see them hit the ground at the same time. Why does this happen? It is all because of a property of gravity discovered by Galileo Galilei. As you may have heard, he discovered the principle of gravitational acceleration (or acceleration due to gravity) by taking various objects to the top of the Tower of Pisa and dropping them. Later, Galileo devised a method to measure this acceleration by rolling balls down an incline.

One of the objectives of the Apollo 15 mission was to test this theory. In 1971, Apollo 15 was the fourth manned mission to land on the moon as part of the Apollo space program. These astronauts conducted several scientific experiments, collected 76 kg of geological material from the moon (which includes deep-core samples), and (of course) paid tribute to Galileo by testing and confirming his theory.

Even though we were all probably well aware of gravitational acceleration before watching this video, and have maybe even witnessed this principle operating in several other experiments, you can't help but feel a sense of awe when you see this operating on the Moon. Without the friction from our atmosphere to slow the feather down, both of these objects were able to fall freely with gravity as their guide. So take 40 seconds to see this. For those of you who, for whatever reason, can’t/don't have the volume on – don’t worry. You don’t need to hear. David Scott gives a brief introduction, and then he lets the magic happen...I should say, he lets gravity happen.

The video can be found here and it is even viewable on your smart phone. The video is easy to see on any laptop or computer, but I’ll warn you in advance, the feather is hard to see if you have a small viewer, so pay close attention to Colonel Scott’s left hand (right side of the screen).