Does the sun have a bow shock? Maybe. 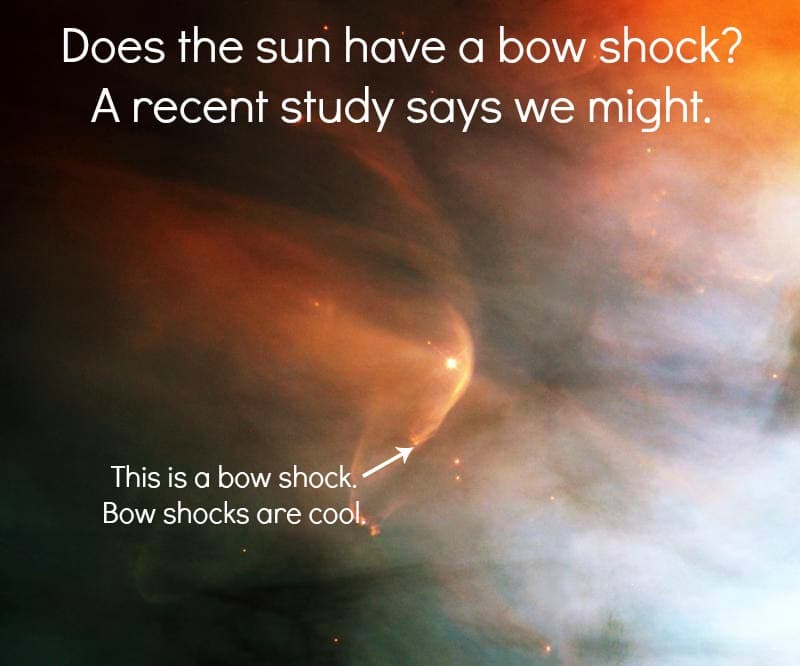 I admit, there are some things that annoy me about our solar system because of a theatrical "cool" factor. The sun won't go supernova, which would be awesome, we don't have a Tatooine-style sunrise, which would also be awesome, we also don't have homo-reptilia living under Earth's surface, which would, again, be awesome. A bow shock would also be cool, because bow shocks are neat things, but a data collected by the Interstellar Boundary Explorer (IBEX) seemed to throw a cold bucket of reality on something else that would have been cool.

Fortunately, science is to the rescue and the sun may yet produce a bow shock. It won't be as cool, defined, and dynamic as the bow shock seen in the pictured star from the Orion nebula, but hey, we must compromise. A bow shock is best visualized as a sonic boom from a jet, but more accurately thought of as the bow wave created by boats as they pass through water. Due to pressures caused by the interstellar medium against the outer layers of the heliosphere, you get this shockwave to form.

A research team from Boston University not only restored hopes for a Sun-caused bow shock, but they suggest that such a shockwave is very likely. Whereas the conclusion of the study challenges the idea that the sun doesn't produce a shock wave, it doesn't really contradict the IBEX findings. This is because bow shocks aren't "one size fits all," there are different types.

IBEX proved that the sun doesn't produce a fast bow shock, the type of bow shock pictured. There are also intermediate and slow bow shocks; IBEX data showed the sun was still moving too slowly (about 52,000 miles/hour) to produce an intermediate wave, but more than fast enough to produce a slow shock. The new calculations show the sun is almost certain to have a slow-moving bow shock in front of it.

At the moment, Voyager 1 is traveling towards the bow shock, but Voyager 2 isn't. This means the two probes should encounter different types of conditions as they cross from the heliosphere into interstellar space. This provides a firsthand ability for scientists to measure whether or not a bow shock exists around our Sun. Even then, I think a better classification for our sun's bow shock would be a "bow wave" because, a shock invokes a much cooler mental image than a wave, which is more accurate in this particular case.