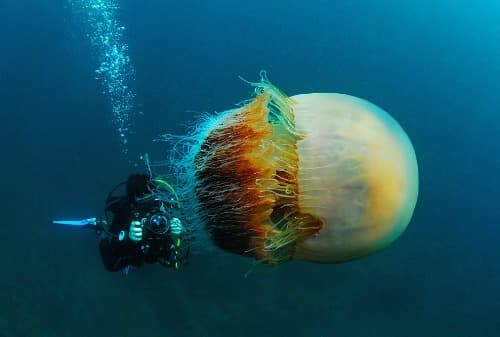 A diverse array of creatures call the deep blue oceans 'home.' Some are bright and colorful, some dark and ugly, some microscopic, others are terrifyingly huge. A creature called the Nomura's jellyfish (formally called nemopilema nomurai) falls into "wet your pants" territory. This beautiful creature — which, at its largest, can grow to be 6.6 feet (2 meters) in diameter, weighing around 450 pounds (204 kilograms) — is kind of taking over certain parts of the ocean.

Recently, a Brazilian photographer scuba dived off the coast of Fukui province, Japan, and captured these stunning images of the creature in its natural habitat. This particular specimen is believed to be about 5 feet wide: about a hundred times larger than the average jellyfish.

As beautiful as they are, they are considered an invasive species, being that they are multiplying at a rapid rate and are quickly overtaking local wildlife. (plus, did we mention they're freaking huge?) Many fishermen have reported having their nets broken, or their catch destroyed by the poison in Nomura's tentacles (sometimes, fish are crushed or slimed).

(As an interesting sidenote, jellyfish have even reportedly shut down nuclear power plants. An influx of moon jellies shut down one of Sweden's fission reactors in two separate incidents, once in 2005 and again in 2013.)

Additionally, over the course of an 8 year period (starting in 2002), marine biologists have recorded at least 7 Nomuraa "blooms," which are probably way more terrifying than they sound (if it's any consolation, their stings hurt, but they aren't usually fatal).

They were once indigenous to China and Korea (both North and South), but they are migrating to Japan at one hundred times the normal rate. It has also been suggested that global warming might be playing a role in not just the migration, but in the overzealous breeding.

According to NatGeo, others have suggested that the waters are being "overfished," and this overfishing has thinned down the herd (so-to-speak), which "may allow the jellies to chow down without competition for food."

SEE ALSO: 6 Beautiful Places on Earth (That Are Secretly Horrifying)