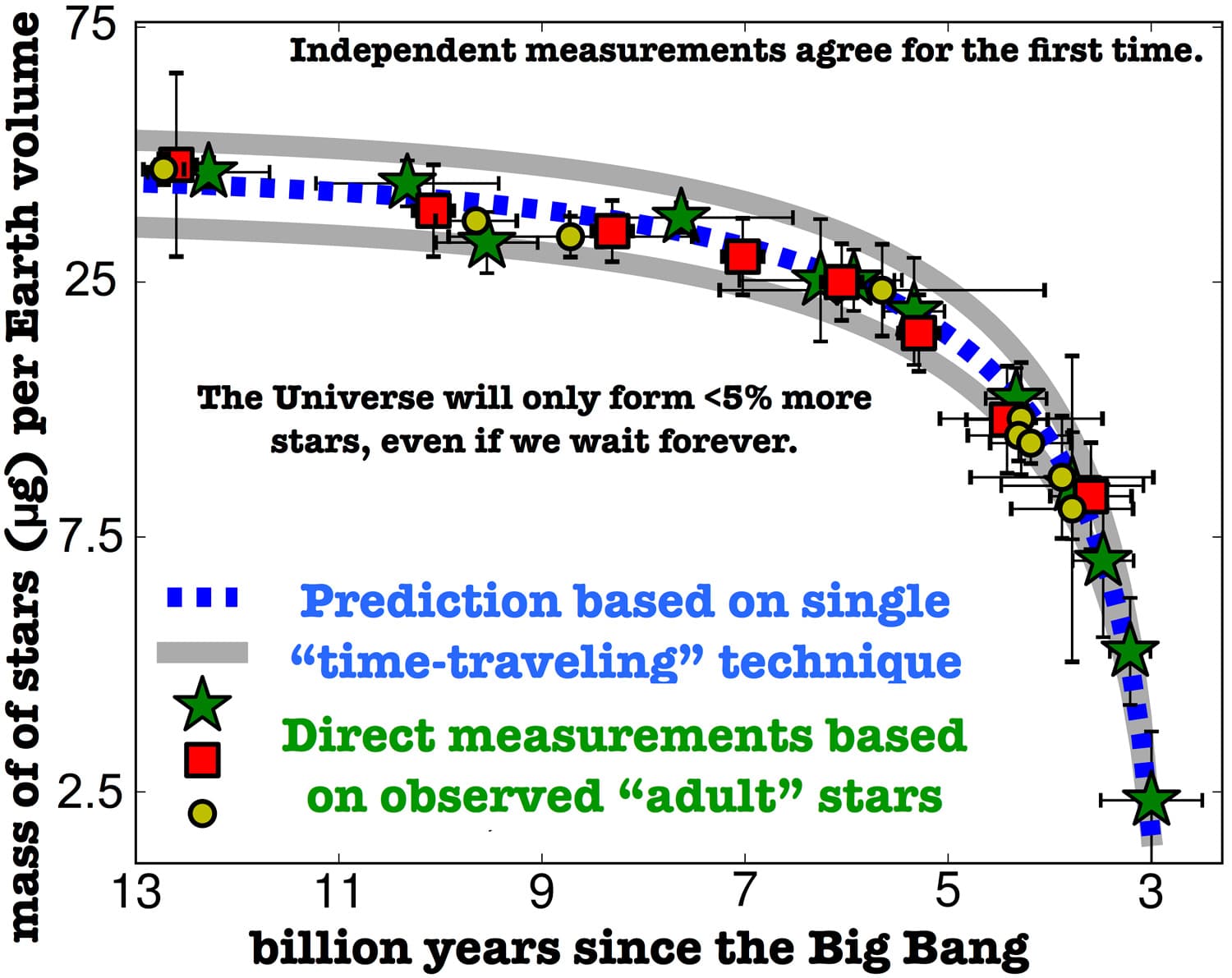 Recently we published an article in regards to the trend of slowing star formation as the universe progresses towards its maturity. In 2012, a research study involving the Subaru Telescope (NAOJ), Very Large Telescope (VLT) and United Kingdom Infrared Telescope (UKIRT) discovered that the universe hit its star formation peak 11 billion years ago, and that it has been declining every since. The study suggests that 95% of all stars that will ever exist, have already been "born". Go here for the original press release.

There are many different theories as to why this is happening in the first place. Most people seem to be against the idea that only 5% of stars are still unborn. Let's look at why it is not at all an unreasonable conclusion to come to.

So far, the universe has been around for nearly 14 billion years, and if it keeps going the way that it has, it will just continue to expand forever. The eventual fate of the universe is most likely to be, The Big Chill. Basically this means that anything that is reasonably close together will remain so - our local galaxy group for example. Anything that is currently accelerating away from us due to the expansion of the universe, will likely continue to do so. The Big Chill is a very boring way for the universe to "end." Due to the ever expanding universe, most of the galaxies will eventually recess far away from us, leaving us with nothing outside of our SUPER galaxy.

Whatever gravity's little fingers can keep a hold of - our local group of some 50 dwarf galaxies- will eventually collide, forming a super sized elliptical galaxy. Imagine, the entire Local Group as one galaxy! For an interesting read on the future of the universe, check out Future Timeline, start with "The Far Future" and then move to "Beyond."

Clearly, star formation is still going to go on for a long time. The idea that 95% of all stars that are ever going to exist having already been born - it can seem like a bit of a stretch. Only 5% more stars in a trillion or more years, almost sounds like a joke. So, let's have a look at some of the facts.

There are several different mechanisms that cause star formation. Most interesting at this point is the "intense bursts." Star formation will occur for a very very long time of its own accord, continuing at a slowly and steady rate. It's the bursts of formation that form the mass amounts of stars, especially when an entire galaxy is undergoing a burst. These are known as Star Burst Galaxies, the name is pretty self-explanatory.

The above explains normal star formation rates within a galaxy, but what causes star burst galaxies? Galactic collisions. When galaxies merge together, star formation rates go through the roof. Although individual stars have a next to zero chance of colliding with one another, this isn't the case for molecular clouds. Compared to stars, the clouds are enormous and diffuse. It really doesn't take much for them to be disrupted and for a flurry of star formation to occur. Even just the gravitational interaction of another galaxy after this initial flurry of large stars have formed, they go supernova, creating even more shock waves.

Tying it All Together:

Star burst galaxies happen in our time, just not as often as in the early universe. Galaxies are still colliding, and passing close to one another, the frequency of it happening is dramatically lower however. This makes the figure of 95% of all stars existing already do. There is strong evidence that shows that in the early universe many smaller galaxies existed and that they interacted far more.

This is the basis of hierarchical clustering, many smaller galaxies merging to become fewer larger ones. All of this galaxy interaction, the merging of galaxies, the entire universe in the early epoch was undergoing a star formation burst, and it continued to do so for a few billion years.

Around today can be seen the byproduct of this, three large galaxies in our local group (Andromeda, Milky Way & Triangulum Galaxy) and ~50 much smaller ones. When Andromeda and the Milky Way collide in a few billion years, intense star formation will occur. T

he difference between this and the interactions in the early universe is that many more galaxies were merging and interacting 11 billion years ago.

At the centre of larger, more compact galactic clusters, the interactions between galaxies, not colliding or merging, heats up the vast amounts of hydrogen gas between them. As they pass through the hot hydrogen, these galaxies are then stripped of their gasses. The stars come out unscathed, only ionized and striped of gas.

As the universe ages, giant elliptical galaxies are more likely to form, slowing star formation even more. Far fewer galaxies are left to collide and create star burst galaxies. Star formation is expected to go along for another trillion or so years, but the glory days are over. 11 billion years ago was the peak, it is when galaxies were colliding left, right, and centre. They were more abundant and there were far fewer elliptical types around. Galaxies were more concentrated, and far more likely to have other galaxies to interact with. It was the perfect condition for star burst galaxies to form. These conditions haven't been seen since, and will not be seen again. This isn't such a bad thing though, if the Milky Way was undergoing a galactic star burst right now, Earth would be in some serious trouble.