Want to Own a Fossilized Tyrannosaurus Rex Bone? Of Course You Do.

Now, thanks to Mini Museum, you can. 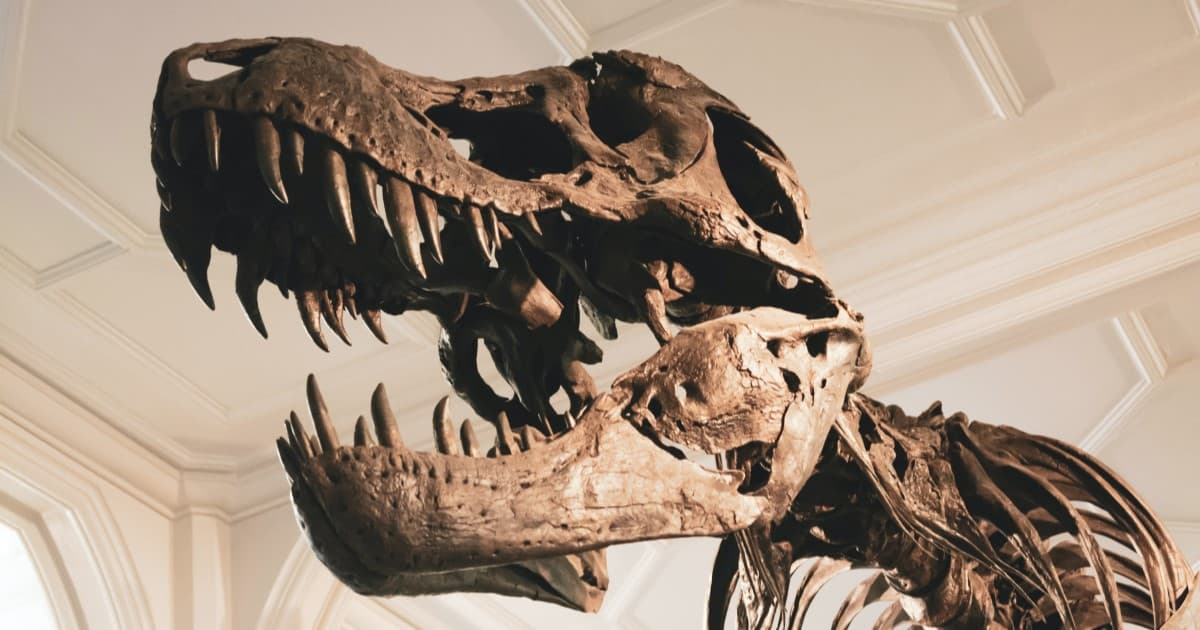 Everybody loves dinosaurs. Massive and mysterious, they inspire more childlike wonder than any other creature in the history of our planet. Now, thanks to the dinosaur fossils for sale at Mini Museum, you can build your own private collection of rare dinosaur bones without spending an insane amount of money.

Since its launch in 2014, Mini Museum has been making miniature collections of rare and unique objects from the earth and beyond that span billions of years of natural and human history. These collections have included things like extraterrestrial amino acids, tile fragments from Roman baths, water from the Amazon River, moon rocks, Egyptian mummy beads, Apollo 11 specimens, pieces of the White House, and of course dinosaur bones, among many other things. More recently, however, Mini Museum started offering individual specimens in an effort to cater to collectors with more specific interests. And as you would expect, their paleontology collection is especially popular.

So, if you or someone you love is into prehistoric animals, you have to take a look at some of the incredible dinosaur fossils for sale at Mini Museum.

OK, our first entry isn't a dinosaur. But it is prehistoric, and it is awesome.

The legendary woolly mammoth evolved in Siberia from the steppe mammoth about 400,000 years ago. Until it disappeared between 5,000 and 10,000 years ago, it was a dietary staple for humans across Asia, Europe, and North America. And now you can own your very own piece of woolly mammoth meat—though you definitely don’t want to eat it.

The Mini Museum Mammoth Meat specimen is a fragment of woolly mammoth muscle tissue. It comes from a well-preserved woolly mammoth leg discovered near the Indigkra River in Siberia, Russia, that has been radiocarbon dated to 19,551 years old. Specimens vary in size, shape, color, and texture – but each one comes in an acrylic jar housed inside a glass-topped riker display box. And they all come with a small information card and certificate of authenticity.

Amazingly, these mammoth meat specimens have not been encased in resin, which means you can actually open the acrylic jar and feel its leathery texture if you so desire. That said, Mini Museum recommends you leave the jar shut at all times to preserve the integrity of the specimen, and because “it can be fragrant when exposed.”

What else would you expect from a piece of 20,000-year-old meat?

Thanks a lot, Spielberg!

The Mini Museum Triceratops Bone specimen is a fragment of a Triceratops bone recovered from South Dakota’s Hell Creek Formation. The sizes and shapes of these specimens vary, but most are roughly two to three centimeters in length. All are housed in a glass-topped riker display case and come with an information card and certificate of authenticity.

Last but not least we have a specimen from a dinosaur that needs no introduction. Though we now know the Tyrannosaurus Rex probably had feathers, this 40-foot 14-ton theropod dinosaur is still one of the most fearsome and badass predators ever to walk the earth. And now you can own a piece of T-Rex bone.

The Mini Museum Tyrannosaurus Rex Bone specimen is a fragment of a bone recovered from South Dakota’s Hell Creek Formation. Sizes and shapes vary widely with this specimen, but most are two to three centimeters in length. All are housed in a glass-topped riker display case and come with an information card and certificate of authenticity.

So, if you’re looking for an unbelievably cool once-in-a-lifetime gift, even if it’s just for yourself, this is definitely it. Don’t wait around until they are all sold out. Take a look at the dinosaur fossils for sale at Mini Museum.

Read This Next
Futurism
An Underwater "Continent" Could Reveal Secrets About Earth's Distant Past
More on Earth & Energy
Rock Battery
Jan 28 on the byte
Researchers Successfully Turn Abandoned Oil Well Into Giant Geothermal Battery
Do The Worm
Jan 27 on the byte
Scientists Name "Funky Worm" Amphibian After a Weird 70s Funk Song
Cow Chow
Jan 26 on the byte
Bill Gates Gives $12 Million to Flatulent Australian Cows
READ MORE STORIES ABOUT / Earth & Energy
Keep up.
Subscribe to our daily newsletter to keep in touch with the subjects shaping our future.
+Social+Newsletter
TopicsAbout UsContact Us
Copyright ©, Camden Media Inc All Rights Reserved. See our User Agreement, Privacy Policy and Data Use Policy. The material on this site may not be reproduced, distributed, transmitted, cached or otherwise used, except with prior written permission of Futurism. Articles may contain affiliate links which enable us to share in the revenue of any purchases made.
Fonts by Typekit and Monotype.