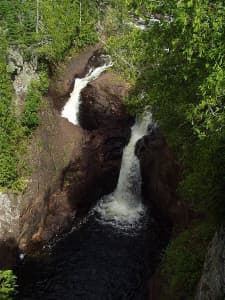 As the Brule River enters the Northern Light Lake and continues its way into Lake Superior one of the most mysterious phenomena on Earth is working its magic. It is known as the Devil's Kettle Falls, and it attracts curious tourists, geologists and hikers from all over the world.

Just north of the shore of Lake Superior, an enormous piece of rock  juts out and splits the Brule River into two smaller rivers. The east river continues its way to Lake Superior, and the other one (the west), falls into a wide hole and vanishes forever.

The general assumption was that there must be an exit point somewhere beneath Lake Superior, but huge amounts of dye, logs, ping pong balls, and even a car (according to one story,  though I've been there myself and can't imagine how they could get a car up there) have been thrown inside the Devil's Kettle to never be seen again.

This weird phenomenon gets even weirder. Considering the huge amounts of water pouring into the Devil's Kettle every second, the idea of an underground broad river is pretty exciting; however, deep underground caves like these can only form in soft rock like limestone, and as every geologist can tell you, Northern Minnesota isn't built of soft rocks.

In regions like Northern Minnesota, where the local rocks are rhyolite and basalt,  tectonic action will sometimes crush underground rock layers,  which is why the environment for water is permeable. Still, there is no evidence of a fault line there, and even if there were, the Devil can't drink from the Brule River forever! Much debris is sent down the crevice by storms and erosion, sometimes as large as boulders and trees, so if the Kettle was an underground gravel bed, it would have clogged at some point. Some explain the disappearance of the objects in the Kettle by saying that there is a 'pocket' inside and that the objects stay trapped there. Still, so much stuff has been thrown in there (imagine every single tourist throwing something inside) that it probably would have clogged anyway.

Another hypothesis is that a lava tube formed under the falls millions of years ago in the subsurface layer of basalt. Lava tubes can be found in Hawaii as new basalt is created there by the islands' volcanoes. According to this theory, over time, the pounding water of the waterfall eroded the rhyolite surface, opened the ancient lava tube, and flowed into it, which would ultimately provide access to Lake Superior's floor. This theory is still problematic. The problem is that the rock composing the Devil's Kettle is rhyolite, and lava tubes NEVER form in rhyolite, according to geologist John C. Green.

Still, geologists confirmed that the rock in that particular area alternates between layers of basalt and rhyolite, so maybe the lava tube is located in a layer of basalt, right? Unfortunately, no. The type of the local basalt is 'flood basalt'. Flood basalt spreads out in flat sheets when ancient lava bubbles from fissures in the ground, and lava tubes only form in basalt flowing down the slope of the volcano, and yes, the geology in northern Minnesota somehow made exceptions to that rule, but still, no lava tubes has been found in the hundreds of exposed lava beds in that area.

So you see, no one knows where the water goes. And we can't just throw in a waterproof GPS. GPS (Global Positioning System) is a network of about thirty satellites orbiting Earth at an altitude of 20,000 km (about 12,427 miles). The original purpose of the system was for military navigation, but nowadays pretty much any device can receive the radio signals those satellites broadcast. However, GPS devices generally only work on the surface. Another question: Why don't we just drop a pack of scientists down there? In case you forgot, it's 244 meters (800 feet) deep, and the water KEEPS going down there. So no, we can't put people in there. Pressure, temperature, and many other factors make it impossible to do. Another idea: Why don't we just drop in some camera that records? 1. It will break because of shocks  2. If it doesn't break, at some point, water will get in it anyway, even if it's the king of waterproofs. 3. The transmissions of the camera will be blocked by the rock. 4. It will be close to impossible to get somewhere with a camera and a long cable as the cable will get stuck everywhere (we aren't trying to have everything wireless for no reason).

Long story short, scientists tried everything: huge amounts of dye paint, ping pong balls, logs, and tourists leave their trace by throwing things inside too, but nothing was ever found. There just isn't an answer to this mystery (yet). So if one day you get lost in a forest somewhere and find  plenty of dye, ping pong balls, cameras and maybe a GPS or two, you should call a geologist right away to share the good news!