Determining Distance Through The Lyman Limit 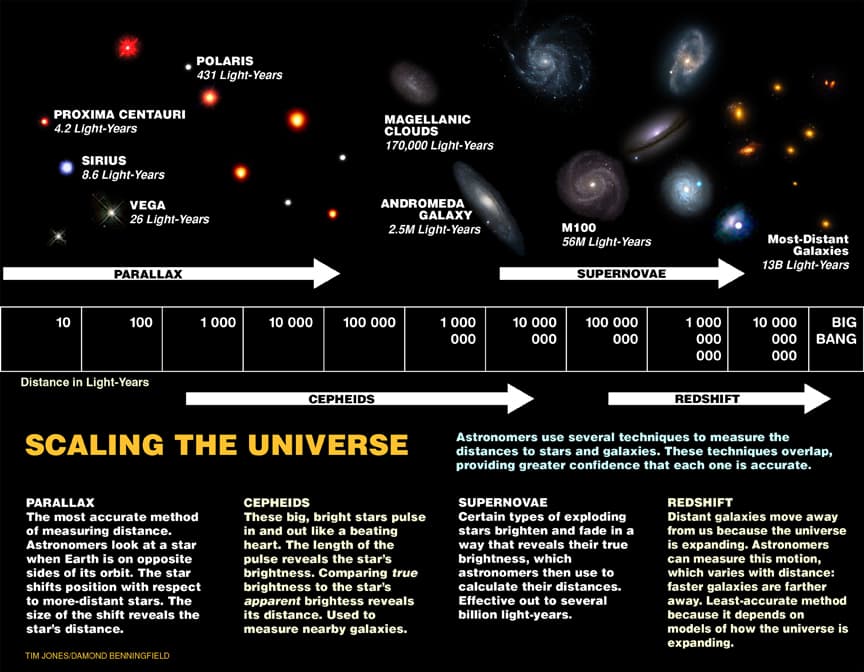 One of the most important things in astronomy - being able to determine the age of galaxies in the distant universe. Galaxies are good, they're large and produce a bright light source for us to detect billions of years later. When finding the distance to objects closer to us, we use techniques such as parallax or a luminosity relationship. Parallax works exceedingly well for stars that are close to us; however, it does not work for other galaxies. For a luminosity relationship, we either use theoretical models of stellar evolution, variable stars or some supernovae (Type Ia for example). For individual galaxies in the early universe, we need a different method.

There are several methods that can be used to determine distance over cosmic scales. Firstly, there is spectrography. This is where a spectrum is taken of the subject, whether it be a planet, star, galaxy or quasar. This spectrum is effectively its fingerprint, the imprint of not only what it is made of but what's between it and us. For determining the distance of galaxies, we can use what is called the Lyman Limit. The Lyman Limit emission is a specific fingerprint that leaves a very distinctive marker. It originates in the Ultraviolet part of the electromagnetic spectrum, and is caused by the most energetic emission of a hydrogen atom. This emission happens at ~91.2nm, as hydrogen is by far the most abundant element, the emission line is very strong and has a distinctive signature. If we do a spectrographic analysis of a distant galaxy, detecting this line at ~912 nm, in the near infrared, we know that it's at a redshift of ~9, less than a billion years after the Big Bang. As those photons make their 13 billion year journey, they are going to pass through clouds of hydrogen. While doing this, they are going to pick up the Lyman absorption lines (there are several). So, not only do we get a picture of when the galaxy existed in the first place, but the placement of hydrogen gas in between.

Doing spectrographic analysis is the only way of getting a truly accurate idea on the ages of different galaxies and quasars so early in the universe. The problem with this method, although accurate, is it is very time consuming. We need to get a half decent signal (enough photons) to get an accurate spectrum, where as in an image, it doesn't need to be as good. We also have to get the spectrum of every galaxy, where do we start? This is where taking images through multiple filters can make all the difference. The Lyman Limit creates a very sharp cut-off in emissions, this is why it is so distinctive and easy to spot. For us astronomers, it has another benefit.

Galaxies slowly get redshifted as we look further and further back into the past, the sharp Lyman Limit cut-off gradually gets pushed out of the UV part of the spectrum and into the blue, green, red and infrared. How does this help astronomers? It allows us to categorise galaxies by what filters they appear in. To explain, let's make 4 hypothetical filters with the transmissions as follows:

Galaxies viewed in the nearby universe will emit pretty strongly in all four of these filters. At a redshift of 4, the Lyman Limit is pushed from 91.2nm to 273.6nm. Although it will still appear in all four filters, it'll be a weaker signal in filter 1. It's still not enough to get an idea of redshift however. At a redshift of 6, the break is now at 456nm. As the cut-off has now pushed out of the first filters passbands, it'll be virtually undetectable in that image. This allows us to break galaxies up into filters that they appear in. Galaxies that do not appear in the first filter, these exist from redshift 4.2 and onwards. If not in the second filter, redshift 6 and onwards. If not in the third filter, 7.9 and onwards. If not in any of these four filters, it exists further than redshift 11.

Putting it All Together:

To truly understand the universe, we have to know where and when galaxies exist. Doing spectrographic analysis is the only way to get an accurate measure on its distance. If all we're interested in is the very distant universe, let's say, redshift 8 and beyond, we don't want to have to get a spectrum of thousands of galaxies just to find a few dozen candidates. To narrow the search field, we use filters. Using the above example, we know that every galaxy that is visible in the first two filters, exists between the present and redshift 7.9. The passbands of actual filter sets (like Sloan or Johnson-Cousins) are far more useful than the above example. More filters covering the same 100-1000 nm range for more precise measurements.