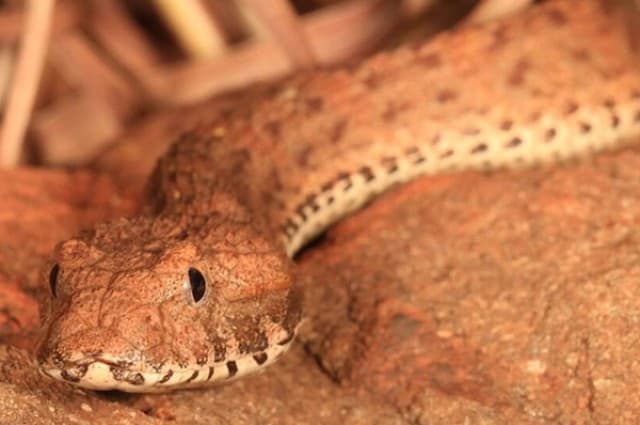 We all know that Australia is host to a number of deadly organisms, and it seems to keep producing new ones. This is the Kimberley death adder, Acanthophis cryptamydros, and although it certainly isn't the largest snake in the world, reaching just 20 inches (51 centimeters) in length, it can still pack a rather nasty punch. Death adders are all highly venomous; in fact, the common death adder is one of the most venomous snakes that we've ever found.

If that's not enough, the snake doesn't seek out it's prey; rather, it makes its victims come to it.

The creature will sit in the bush and wait for a viable candidate to come along. Then it starts to slowly wiggle its worm-like tail in an attempt to lure in the unwary organism towards its resting place. Once the prey gets close enough, the snake lunges forward and sinks its fangs deep into its victim.

Fortunately—for us anyway—since these snakes are more sit-and-wait predators, they are not know for attacking humans unless they feel threatened. That "unless" is important. If you are walking though Australia and you stumble across a brownish snake, maybe just leave the little guy alone (in fact, just leave all snakes alone).

As an interesting aside, these snakes can't hear sounds. That's right, the death adder is deaf. Indeed, many people think that the snake's common name is simply a misunderstanding of the original name, which may have been "deaf adder."

Ultimately, the recently discovered Kimberley death adder was found by Simon Maddock, a Ph.D. student in a joint program at University College London and the Natural History Museum, London. He made the find by studying the DNA of various death adders. Maddock and his team sequenced genes that were collected from samples from a number of museums and institutions. All in all, they looked at 112 specimens. They undertook this task in order to figure out how and when the various reptile species evolved.

That's when they noticed something odd.

"When we looked at our DNA data, we found there was one group of snakes that were really, really different,” said Maddock, whose study was published in the journal Zootaxa. And the Kimberly death adder was born—or, at least, it was found.

But as previously mentioned, the Kimberly death adder is a bit of a misnomer, as death adders don't really attack many humans. So what snake is truly deadly?

Well, according to most experts, the title of "world's worst" unquestionably goes to the inland taipan. That is because this beast has both the most toxic venom and the highest amount of venom injected when it bites. This snake is also a native of Australia, and according to the Australia Zoo, it has enough venom to kill a hundred men in one bite.

However, whether or not a snake bite will truly be deadly depends on more than just how venomous they are. Scientists say that the real primary considerations are whether or not you have access to health care and, if so, if the medical providers have ready access to antivenin.

If not, then things generally go pretty poorly.

One of the species that is actually believed to kill the most people worldwide is the puff adder. This is because it tends to blend in with its surroundings, which means that the snake is often stepped on by unsuspecting individuals. On top of this, the snake lives in an area that is economically depressed, so individuals often don't wear shoes, which greatly contributes to the problem.

Similarly, Russell's viper in India isn't very venomous according to the official scale; however, it's responsible for thousands of deaths each year in India due to the poor health care and how closely the snake lives alongside humans.

So while the Kimberly death adder is an interesting discovery, we'd do well to remember how deadly these snakes can be for individuals who don't have access to the basic necessities of life.

Read This Next
Fire Starters
Australia Arrests Dozens for Starting Bushfires on Purpose
Three Seasons
By 2050, Winter Will No Longer Exist in Australia, Say Researchers
Futurism
Australia Has Big Plans to Save the Great Barrier Reef. But It Can't Do It Alone.
Futurism
The Seabin Will Start Cleaning Australian Waterways in March
Futurism
Australia's Electricity Costs Will Plummet, Thanks to a New Tesla Solar Project
More on Earth & Energy
RIP Fred
4:57 PM on the byte
Instead of Predicting Length of Winter, Groundhog Simply Dies
Fly Guy
Yesterday on the byte
Bird Advocates Horrified by Pigeon Dyed Pink For Gender Reveal Party
The Dos and Do-Do...
Yesterday on the byte
Startup Backed By "Jurassic World" Producer Says It Will Revive Extinct Dodo Using Complete Genome
READ MORE STORIES ABOUT / Earth & Energy
Keep up.
Subscribe to our daily newsletter to keep in touch with the subjects shaping our future.
+Social+Newsletter
TopicsAbout UsContact Us
Copyright ©, Camden Media Inc All Rights Reserved. See our User Agreement, Privacy Policy and Data Use Policy. The material on this site may not be reproduced, distributed, transmitted, cached or otherwise used, except with prior written permission of Futurism. Articles may contain affiliate links which enable us to share in the revenue of any purchases made.
Fonts by Typekit and Monotype.