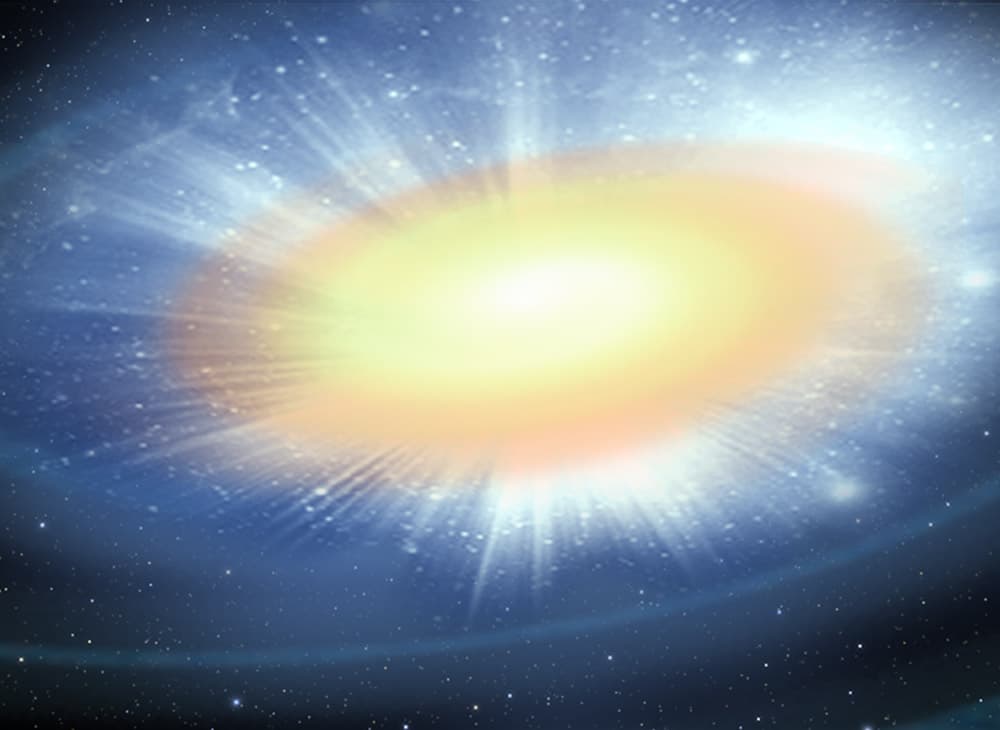 You know what they say: the silent killer is the kind you should be most concerned about (and if they don't say that, they totally should). Death by gamma radiation might not be as glamorous as a killer asteroid, nor does it have the same theatrical flare as a supernova; however, beams of energetic particles called gamma-ray bursts are the most violent (and even more powerful ) forces that exist in the universe.

If one were to blast off within a sphere extending some 3,500 light-years around Earth, with its axes pointed toward us, it would bathe our planet in radiation that could ultimately cause irreparable damage to our atmosphere. In fact, it would be the equivalent of nuking Earth with 300,000 megatons of TNT, which is 30 times larger than the combined strength of all the world's arsenal of nuclear weapons.

One mechanism behind the creation of these energetic blasts of radiation is the collision of binary neutron stars. Neutron stars are the remnants of supernova blasts, the last act of a dying star. Supernova occur after a massive star exhausts its supply of hydrogen fuel at its core (this hydrogen is then fused into helium). In essence, as the core of the star violently releases the bulk of its gaseous envelope into the surrounding area of space, the entire mass of the star is crammed into a sphere that's only a few kilometers across, but extremely dense—a neutron star. In some cases, the neutron stars can spit out additional light and radiation, classifying it as a pulsar.

Sometimes, two neutron stars are able to stably orbit each other for billions of years until they inevitably clash, with both sent spiraling inward at speeds that are slightly slower than the speed of light (186,282 miles [299,792 km] per second). Ultimately, when they do collide, they release more energy in a hundredth of a second than our sun produces in ten billion years time. The magnetic energy produced at that moment is sufficient to create a short (but incredible) blast of gamma-ray radiation.

Not too long ago, it was revealed that another precious mineral is created during these encounters. It's a safe assumption that at least a small portion of people that are  reading this right now have this mineral somewhere in their general vicinity. "What am I talking about," you may ask? GOLD! A study, undertaken by NASA’s Swift Space Telescope last year, has revealed compelling evidence that suggests all of Earth's supply of gold was produced in the midst of these destructive collisions.

It has long been known that supernova explosions are responsible for the formation of all of the heavier elements seen in the periodic table, but the sheer volume of gold seen in our solar system has always been a profound mystery. So the team took a look at one particular neutron star collision site, which is located more than 3.9 billion light years away from Earth (that's 24 sextillion miles!) The subsequent collision, dubbed GRB 130603B, is thought to have released a small gamma-ray burst that lasted a mere two-tenths of a second. Located amongst the rubble, they were able to suss out the afterglow of a plethora of heavy elements left seeding the region, which became quite clear at infrared wavelengths.

According to the team, said collision likely spawned approximately 10 moon masses of heavy material (this constitutes anything heavier than iron. Not just gold, but silver and platinum as well). This material will then become locked up in rocky objects, which traverse space before crashing into planetesimals; where they stay unless they are eventually dug up by various lifeforms (like us). Some choose to carve them into funny shapes and wear them around their fingers as a profession of their undying love to another person.

Since the human life-span is laughably short compared to the immensely old universe; it's a good thing the people at NASA create these simulations to speed the process up: affording us the opportunity to see these collisions in a few minutes, as opposed to a few millions or billions of years. Here, we have a short simulation, from the years leading up to the collision, to the subsequent gamma-ray burst. Next time you hold a sliver of gold in your hand, you should keep in mind that the substance was forged in the belly of a star.

From great destruction, comes extremely expensive metals. Such is life.

Here's the full press release on their findings: