The Day the Honey Turned Blue 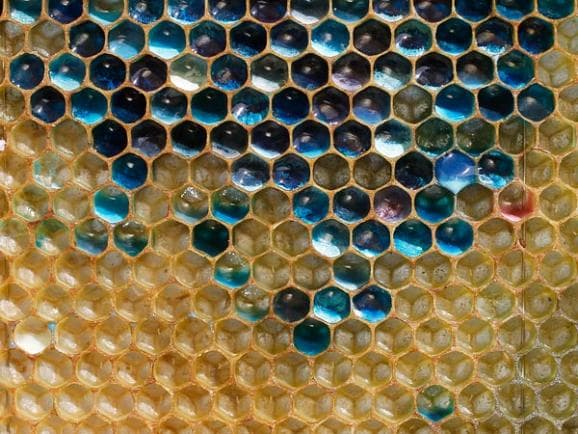 Did you know that we once had blue honey? It's true. The above image is 100% real. Unsurprisingly, it wasn't some genetic quirk that caused this. Mother Nature didn't take a day off and let things run amok.  The cause, as is often the case, was humanity.

More specifically, the cause was junk food.

It all happened in 2012, when some French beekeepers noted something...a little strange about their honey. The color just wasn't right. In fact, it was entirely wrong. Instead of a yellowish, translucent hue to the honey, the beekeepers found themselves face to face with a blue-gray concoction that looked like, well, not honey. While it looks pretty cool when it is still on the comb, it looks rather questionable in a jar. You can take a look for yourself in the image below. It reminds me of papier-mâché after you've dunked a newspaper in it and all the ink has run off. And what's worse, it wasn't just blue. Some of it was brown and some an odd shade of green.

Eventually, it was discovered that the bees had been feasting on the shells of colorful M&M. As it turns out, just 2.5 miles (4 kilometers) away from the beehives, Mars had a biogas plant that was processing waste from producing M&Ms. After the plant discovered the problem, they rectified it by cleaning and covering all of the outdoor containers that the M&M waste was stored in.

As an interesting (and unfortunate) aside, the strange colored honey isn't technically honey. This is because, in order to produce honey, bees collect nectar from flowers. And since the M&M concoctions came from non-floral sources, it's not really honey. Why is this a problem? Because the colored honey didn't meet France's standards of honey production (as it was not obtained from the nectar of plants), and so it could not be sold. This is rather bad news for a region that produces tons of honey annually.

While this may seem like little more than an interesting tidbit, or at worst, a slight problem that was quickly resolved, it is terribly relevant, and it's more than a little significant. Ultimately, this story shows how human industry is altering and impacting nearly every facet of our world. It's not just our air, water, and ozone that we need to worry about. We have touched nearly everything.

Now, that does not mean that we are faced with assured and insurmountable destruction. But it does mean we are (very often) thoughtless and ignorant. We act without knowing the consequences and we take shortcuts in order to make things easier. But the good news is, it won't take much to make things better. Just stop and think. For a moment, think.

That can make all the difference.