David Bohm and The Holographic Universe: 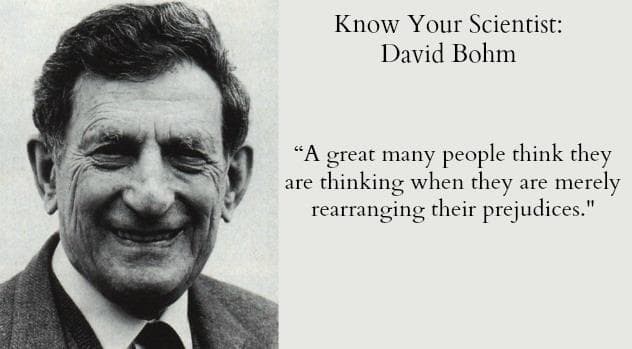 The underlying premise behind these various titles is the idea that at a deep level all things in the universe are infinitely interconnected. If this sounds more like philosophy than science, remember that until relatively recently, people researching the natural world were called “natural philosophers” and the words “scientist” and “physicist” were coined by William Whewell, only in the 19th century. But let’s get to the title of this piece, the “holographic universe.”

What is a hologram?

A hologram is a three-dimensional photograph made with the aid of a laser. The word has Greek roots, “holos” meaning whole, and “gramma” meaning message. To make a hologram, a laser is used to illuminate the physical object. The second laser beam is bounced off the reflected light of the first and the interference pattern is captured on the recording medium. When the developed film is illuminated by another laser beam, a three-dimensional image of the photographed object appears.

The difference between an ordinary photograph and a hologram (apart from the way it’s made) is in the part/whole relationship. If you cut up a regular photograph into smaller pieces, you will end up with each piece as a separate part of the whole. You will need to use your jigsaw puzzle skills to put the picture together again in order to see the original image. But if you cut up the hologram into smaller parts, each part will contain a smaller, blurrier, but exact version of the whole picture.

How does this relate to the universe and David Bohm’s idea that it resembles a gigantic hologram?

An Introduction to Bohm:

David Bohm was born in Wilkes-Barre, Pennsylvania, on December 20, 1917. He went to Pennsylvania State University to study physics, and later to the University of California at Berkeley to work on his PhD thesis with J.Robert Oppenheimer.

While at Berkeley, Bohm, an idealist, became involved in politics and he was labeled a communist by the FBI led by J. Edgar Hoover. This prevented him from getting a clearance to work with Oppenheimer on the Manhattan Project at Los Alamos to produce the first atomic bomb during the World War II. However, while working on his doctorate at Berkeley, he discovered “the scattering calculations of collisions of protons and deuterons” which was used by the Manhattan Project team, and was immediately classified. As a result, Bohm was denied access to his own work and wasn’t allowed to write or defend his thesis. Oppenheimer had to certify before the faculty of the university that Bohm had indeed successfully completed his research.
Bohm was awarded his PhD in physics.

In 1947, he became an assistant professor at Princeton University, where he met Albert Einstein. Einstein found Bohm to be a kindred spirit, a like-minded colleague with whom he could have fascinating conversations about the nature of the universe. While in Princeton, at the beginning of the McCathyism period of anti-communist hysteria, Bohm was called to appear before the Un-American Activities Committee to testify against fellow scientists. Pleading the Fifth Amendment, Bohm refused to testify. For this he was arrested and charged with contempt of Congress but was later acquitted by a jury. This whole affair, however, upset his career prospects at Princeton and his contract wasn’t renewed. Bohm left the United States, first moving to Brazil, then to Israel, and later to England. In England he was a professor of physics at Bristol University and later worked as a Professor of Theoretical Physics at the University of London. He died of heart attack in London on October 27, 1992, aged 74.

David Bohm’s influence extends beyond physics to embrace philosophy, psychology, religion, art, and linguistics. Interestingly, his ideas have been received more enthusiastically by the arts community than by the scientific establishment. The Tibetan Master Sogyal Rinpoche once remarked that there are striking parallels between Bohm’s model of the universe and the Buddhist *bardo* teachings, as they both “spring from a vision of wholeness.”

Bohm had doubts about the theory of quantum mechanics and its ability to fully explain the workings of the universe. Despite having written a classic textbook on quantum mechanics, Bohm, agreed with Albert Einstein that “God doesn’t play dice with the universe.” While working on plasmas at the Lawrence Radiation laboratory in California in the 1940s, Bohm noticed that once electrons were in a plasma (which has a high density of electrons and positive ions), they stopped behaving like individual particles and started behaving like a unit. It seemed as if the sea of electrons was somehow alive. He thought then that there was a deeper cause behind the random nature of the subatomic world.

Bohm came up with an idea of the quantum potential to suggest that subatomic particles are highly complex, dynamic entities that follow a precise path which is determined by subtle forces. In his view the quantum potential pervades all space and guides the motion of particles by providing information about the whole environment.

For Bohm, all of reality was a dynamic process in which all manifest objects are in a state of constant flux. By introducing the concepts of “implicate order” and “explicate order”, Bohm argued that the empty space in the universe contained the whole of everything. It is the source of explicate order, the order of the physical world, and is a realm of pure information. From it, the physical, observable phenomena unfold, and again, return to it. This unfolding of the explicit order from the subtle realm of the implicate order, and the movement of all matter in terms of enfolding and unfolding, is what Bohm called the Holomovement.

Bohm believed that although the universe appears to be solid, it is, in essence, a magnificent hologram. He believed in the “whole in every part” idea, and just like a hologram, each part of physical reality contained information about the whole.

Bohm was not the only scientist who arrived at this conclusion. In neuroscience, Karl Pribram, who was working on the functioning of the brain, concluded that memories are encoded not in specific regions of the brain, but in patterns of nerve impulses that crisscross the brain in the same way that patterns of laser light interference crisscross the area containing a holographic image. Together, Bohm and Pribram worked on developing the so called “Holonomic Model” of the functioning of the brain.

Bohm believed that his body was a microcosm of the macrocosm, and that the universe was a mystical place where past, present, and future coexisted. He postulated the existence of a realm of pure information (the implicate order) from which the physical, observable phenomena unfold. Unlike classical physics where reality is viewed as particles of separate, independent elements, Bohm proposed that the fundamental reality is the continuous enfoldment (into the implicate order) and unfoldment (of the explicate order) from the subtle realms. In this flow, matter and space are each part of the whole.

In stark contrast to Western ways of thinking about the nature of reality as external and mechanistic, Bohm considers our separateness an illusion and argues that at a deeper level of reality, we, as well as all the particles that make up all matter, are one and indivisible. For Bohm, the “empty space” is full of energy and information. It’s a hidden world of the implicate order, also known as the “Zero Point Field” or the “Akasha”.

One of the most valuable insights Bohm has given us is about the nature of randomness. Randomness is considered intrinsic to some processes that are observable in the natural world as well as at the quantum level. In Bohm’s view, when a behavior is described as random, this label indicates our lack of understanding rather than the nature of the system itself. He urged us to consider a broader context and hidden variables that may be operating at a level that is impossible for our current instruments to detect.

“Randomness,” Bohm said in his interview with David Peat in 1987 “is assumed to be a fundamental but inexplicable and unanalyzable feature of nature, and indeed ultimately of all existence…However, what is randomness in one context may reveal itself as simple orders of necessity in another broader context. It should therefore be clear how important it is to be open to fundamentally new notions of general order, if science is not to be blind to the very important but complex and subtle orders that escape the coarse mesh of the “net” in current ways of thinking”.

If more scientists like Bohm were willing to treat physics as a quantum organism rather than as quantum mechanics, we might get closer to a revolution in our understanding of the universe.