Famous Geneticist's Dating App Would Match Users Based on DNA

He thinks it could lead to the elimination of all genetic diseases. 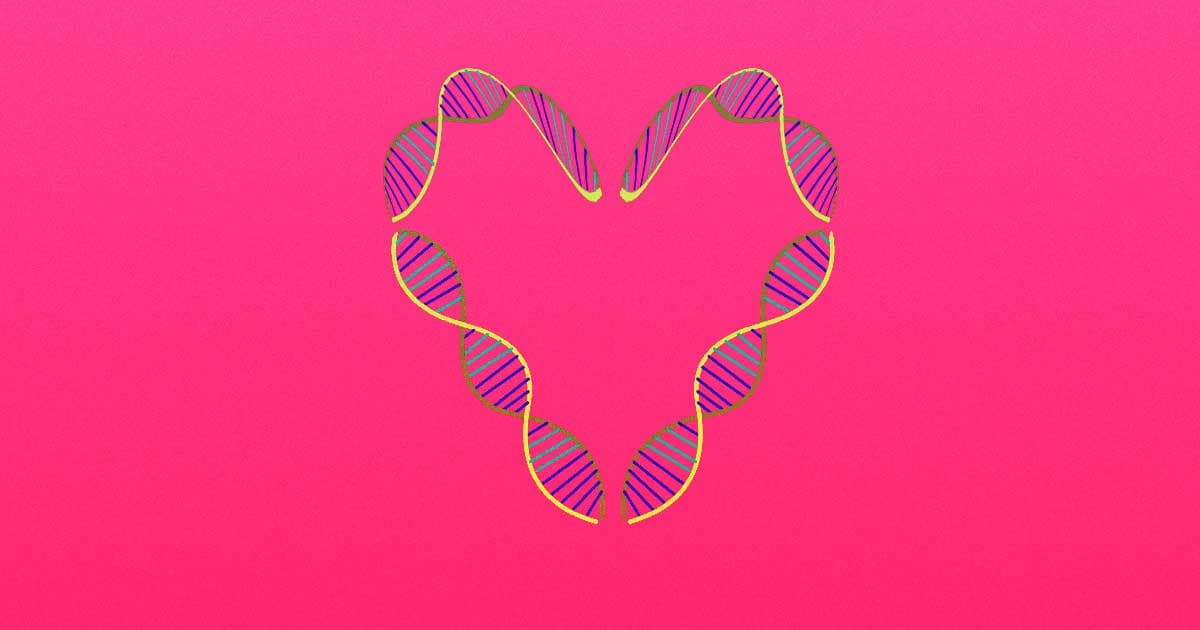 Also on his professional to-do list? Create a dating app that matches users based on their likelihood of not passing genetic diseases along to their offspring.

To understand how that might work, you need to know a bit about genetic inheritance, and specifically how genes can be dominant or recessive.

As you might expect from the nomenclature, dominant genes take precedence over recessive ones — meaning that if two people have a baby, and one person has a dominant gene for a trait and the other has a recessive gene for it, the dominant gene is more likely to show up in their offspring.

A simplified example: the gene for brown eye color is dominant, while the one for blue is recessive, so if a brown-eyed person and a blue-eyed person have a child, it'll likely have brown eyes.

Some genetic diseases and conditions, such as sickle cell anemia, are caused by recessive genes. The average person carries an estimated 20 of those recessive genes, but most of the time, they don't even know it because they also inherited a "healthy" dominant gene from their parents that overshadows the recessive one.

But if a carrier of a disease-causing recessive gene ends up having a baby with someone who also carries the same recessive gene, their offspring has a 25 percent chance of actually suffering from the disease — and that's the situation Church hopes to avoid with his in-development DNA dating app, according to a new interview with CBS's "60 Minutes."

"You're suggesting that if everyone has their genome sequenced and the correct matches are made, that all of these diseases could be eliminated?" correspondent Scott Pelley asked.

Of course, we're a long way from a world in which everyone has their genome sequenced.

And we're even further from one in which everyone would be willing to let their genomic data help determine who they start a family with — after all, two carriers of a recessive gene for a disease can still have a healthy child, and no doubt some partners would be willing to take the risk in the name of love.

Still, some people already automatically swipe left on potential mates for a litany of — sometimes bizarre — reasons. And if we could add "incompatible DNA" to the general list of dating dealbreakers, the end result could be a healthier human race.

Read This Next
Bad Cops
Cops Allegedly Used a Sexual Assault Survivor's DNA to Arrest Her for Property Crime
Brands We Love
Spot Medical Problems Before They Begin With Genetic Health Testing From 23andMe
Come On In
This DNA Testing Company Gave Its Data to the FBI
Futurism
Genetic Analysis Helped The AP Catch Sketchy Fisheries
Futurism
Finding Dates via DNA Is Scientifically Questionable — and Overall a Bad Idea
More on Future Society
Vatican Vagrant
Yesterday on the byte
Elon Musk Takes Flabbergastingly Awkwardly Picture With the Pope
Movie Magic
Yesterday on the byte
Robots Now Delivering VR Porn Headsets to the Terminally Lonely
McDoom
Yesterday on the byte
Sorry Folks, That Photo of Doom Running on a McDonald's Kiosk Is Fake
READ MORE STORIES ABOUT / Future Society
Keep up.
Subscribe to our daily newsletter to keep in touch with the subjects shaping our future.
+Social+Newsletter
TopicsAbout UsContact Us
Copyright ©, Camden Media Inc All Rights Reserved. See our User Agreement, Privacy Policy and Data Use Policy. The material on this site may not be reproduced, distributed, transmitted, cached or otherwise used, except with prior written permission of Futurism. Fonts by Typekit and Monotype.