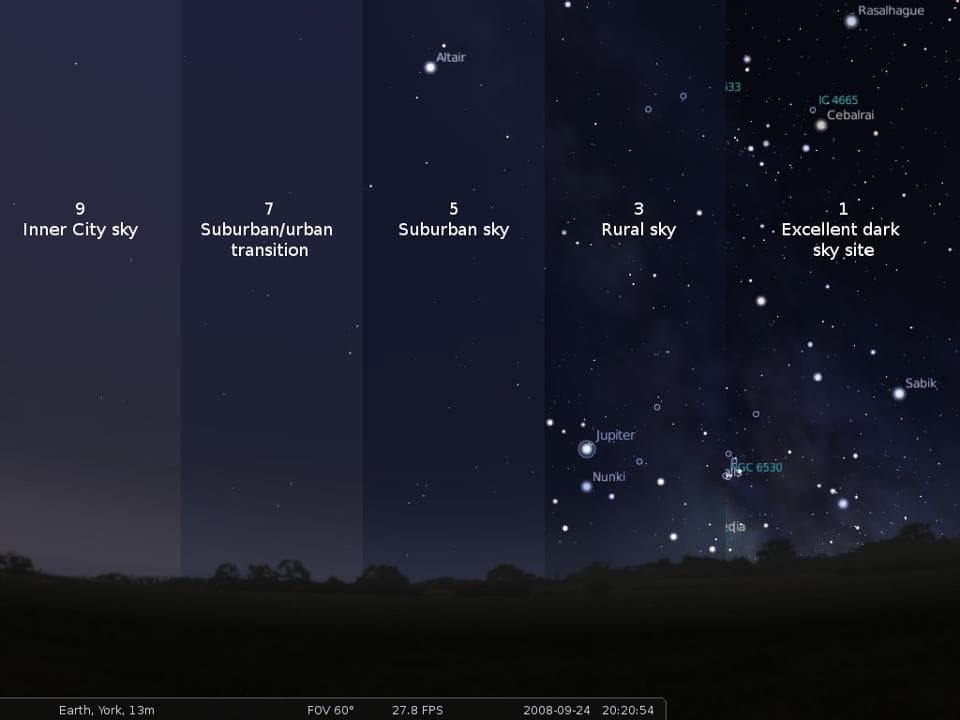 Ever since the invention of fire, humans have sought to banish the night. Being creatures that don’t see very well after the Sun has set, we have been on a quest to turn night into day for thousands of years. With the advent of the modern electrical light, not only is this a possibility – but a reality. There are hundreds, if not thousands of cities that have completely eliminated the night, cities such as New York and Beijing, are so bright that night has been eliminated. Even smaller cities cast enough light to eliminate our handicap, allowing us to function in the dark. But this has come at a cost – light pollution.

As our electric lights brighten our night, they also brighten our sky. The light emitted from these light sources reflects off our own atmosphere and brighten the sky, causing a phenomenon called Skyglow. Because this brightens our sky, it washes out the dimmer stars in the heavens. The more light pollution you have, the more stars get washed out.

John Bortle came up with a scale to measure the darkness of the sky, this scale is called the Bortle Dark-Sky Scale and it was first published in Sky & Telescope magazine. It was published to help amateur astronomers quantify the amount of light pollution present in their observation sites, giving them a scale to work with in their quest to see the cosmos. The scale is a 1-9 numbered scale, with a Class 1 sky having zero light pollution and Class 9 having the most.

To summarize the classes of the Bortle Dark-Sky Scale

There are several organizations that seek to limit light pollution and protect the darkest areas on Earth in the same way national parks protect the land. Personally, I live in Portland, Oregon and I’d say the sky here is a Class 7, the darkest sky I’ve seen is definitely a Class 2 (maybe even a Class 1, out here we have some of the last class 1 skies left in America).

What about you? How would you describe the sky in your hometown and what is the darkest sky you’ve ever seen?