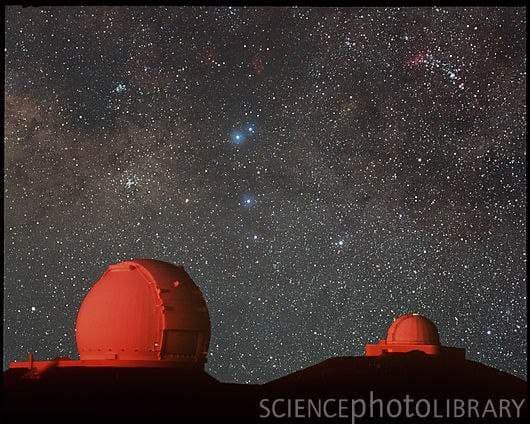 Some of us have looked at getting a telescope, gone down to the store, and seen telescopes going for prices between $200 all the way up to the fancy $8,000 mark. You know, the ones you look at dreaming that you could own. Then there's the Large Binocular Telescope. On a documentary entitled "Big, Bigger Biggest: Telescopes", it was mentioned that the 8-meter (26-foot) mirrors that went into the telescope cost $10 million apiece—and there are two of them.

Looking at telescopes like these I just wish I could afford one myself!

There are currently some very large telescopes scattered around the globe. Before having a look at some of the proposed telescopes to come, it would be good to reflect on what we currently have to give a better appreciation of what is to come. Several of the current largest telescopes include the Gran Telescopio Canarias, the telescopes at Keck Observatory, and the Southern African Large Telescope (SALT).

Gran Telescopio Canarias, also known as GTC, is a 10.4-meter (34.1-foot) telescope in the Canary Islands, Spain. The GTC is based on the design of the Keck telescope in that itss main mirror is made up of 36 smaller segments. It's a US$179 million telescope that began operations in 2007, although it wasn't officially opened until 2009. The GTC is located at an altitude of 2,400 meters (1.5 miles) above sea level, and at this stage is the largest optical telescope on Earth.

The two telescopes that make up the W. M. Keck Observatory in Mauna Kea, Hawaii, are probably some of the more well known telescopes globally. Keck I and Keck II are both 10-meter (33-foot) telescopes that can work either on their own, or team up to effectively form one larger mirror. When both of these mirrors work together, they collectively have an effective aperture of about 14 meters (46 feet). Keck I and II have been running since 1993 and 1996 respectively, and are located at an altitude of 13,796 feet (4,205 meters). Although neither telescope alone has the largest primary mirror in the world, the two of them combined do make the largest optical telescope in the world.

The Southern African Large Telescope, or SALT, has the third largest mirror in the world, and the largest single mirror in the Southern Hemisphere. SALT is based on the design of the Hobby Eberly Telescope. Modifications to the latter telescope's design allow SALT to have a larger field of view and effective collecting area. SALT is made of 91 individual 1.2-meter (4-foot) hexagonal mirrors which collectively form a larger 9.8 m × 11.1 m (32 ft × 36 ft) mirror. Unlike most telescopes, SALT is designed to only move on one axis and is inclined at an angle of 37° from the horizon. Designing the telescope in this way made it considerably cheaper, even with the added complexity of the telescope's design. SALT is located at the South African Astronomical Observatory near Sutherland.

These are just a couple of the latest telescopes around the world at the moment but there are more to come, but that is a post for another day. For now though, just close your eyes and imagine being able to view the sky through a pair of binoculars like the Keck telescopes!