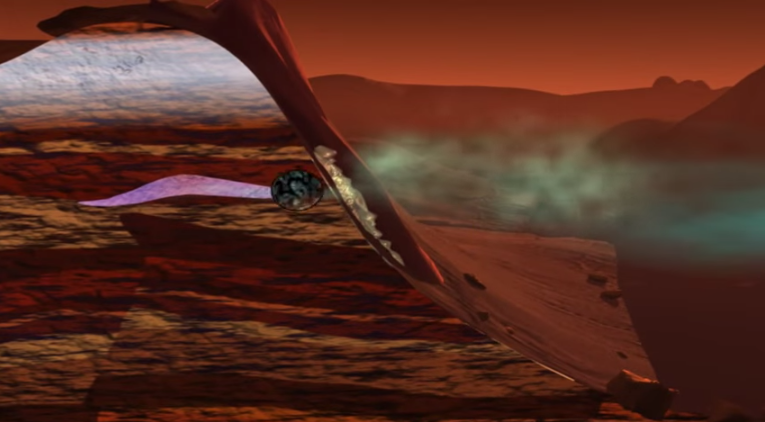 SAM is the Sample Analysis of Mars instrument suite. It roams about the Red Planet on the back of the Curiosity Rover. One of the major goals of this mission, and a mission that SAM is crucial for, is detecting habitable environments on the surface of Mars. Now, before we begin, an important note: When we say "habitable," we don't mean that you could pull out a blanket and have a picnic because the environment is just so lovely. Rather, we are referring to environments that previously could have supported life. Also of note, "life" has a rather broad definition. Of course it includes the things that come to mind most immediately—dogs, cats, people, elephants, and so on—but it also includes more simple lifeforms (like microbes). And that's really what we are talking about here.

With this in mind, there are several pieces of big news coming from SAM. First, it found a dramatic increase and  decrease in methane in Gale crater. Ultimately, this means that the environment on Mars is still active. Now, this could come from inorganic interactions on Mars (like the meeting of water and rock somewhere subsurface). But it could also come from organic sources, like methanogenic bacteria below the crust of the Red Planet. Second, SAM  has made the first definitive detection of organic molecules at Mars. This is rather notable, as organic molecules make life as we know it. Indeed, they are the building blocks of all known forms of terrestrial life.

As NASA reports, "While the team can't conclude that there was life at Gale crater, the discovery shows that the ancient environment offered a supply of reduced organic molecules for use as building blocks for life and an energy source for life. Curiosity's earlier analysis of this same mudstone revealed that the environment offered water and chemical elements essential for life and a different chemical energy source."

Ultimately, we have been looking for this for (literally) decades on Mars, and we finally found it. "The search for organics on Mars has been extremely challenging for the team," said Daniel Glavin of NASA Goddard, a co-author on the paper. "First, we need to identify environments in Gale crater that would have enabled the concentration of organics in sediments. Then they need to survive the conversion of sediment to rock, where pore fluids and dissolved substances may oxidize and destroy organics. Organics can then be destroyed during exposure of rocks at the surface of Mars to intense ionizing radiation and oxidants. Finally, to identify any organic compounds that have survived, we have to deal with oxychlorine compounds and possibly other strong oxidants in the sample which will react with and combust organic compounds to carbon dioxide and chlorinated hydrocarbons when the samples are heated by SAM."

There are a number of places that it could have come from, and even if it isn't from life, it will allow us to have a more solid understanding of the Martian world. However, the team that reported the findings is optimistic: "We think life began on Earth around 3.8 billion years ago, and our result shows that places on Mars had the same conditions at that time – liquid water, a warm environment, and organic matter," said Caroline Freissinet of NASA's Goddard Space Flight Center. "So if life emerged on Earth in these conditions, why not on Mars as well?" Freissinet is lead author of a paper on this research submitted to the Journal of Geophysical Research-Planets.

In short, this gives us new hope in the search for chemical evidence of life. We found the material. Now we just need to find its origin.